The Power Authority – When the urgency of being late for work met the insistence of a family emergency, any mode of transportation made for an uncomfortable ride.

That urgent need stemmed from a responsibility to complete the job and get the Deew sample to safety (on another unincorporated planet). This compulsion to be there for the inhabitants of Dio Qze – referred to as family during this tumultuous stretch, created such the anxiety. To Janette, this elevator could not move fast enough. She was obviously hands-on and constantly in the know, so these attributes translated to an imposed measure of empathy where her intricate understanding of the stakes held a direct correlation to a burgeoning concern for the stakeholders.

There was no use in agonizing over what would be, but then again, what was the use of trying not to worry? These people were Janette’s heart. They were in her soul as a result of becoming consumed by her long hours of advanced social work which had obviously been done on behalf of them. One could not receive enough pay for the tediousness of performing this job. There was not a person alive who would get enough credit to make up for the immense pressures from trying to net its accomplishment. The risks were high with an accompanying amount of stress to match – yes, but the task offered no guarantees that a high reward could also be realized. The position made no promises that she would even wind up surviving it, in order to see her efforts either have a positive impact or have been done all for not. 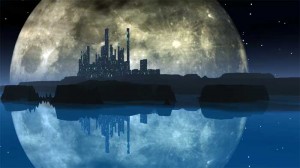 Some things were not carried out in accordance of obligation. Above the low, rumbling simmer of a Deew in stage two, Janette happened to be well past the stage of caring (as things suddenly became real) because duty was being overridden by a dire need for self-preservation at this point. Other things had nothing to do with pay. The money was nice for her stature, but there was not enough soap available to wash its grime off and scrub the botanist’s permanently scarred memory of these treacherous events and those that led up to them in order for her to even be able to enjoy the salary. The only certainty was that things had come so far and needed to be seen through upon principle alone. Everything else really was nonsense.

Belly crawls through a maze of piping had the contingent almost on path of an attached, lesser known duct which served the purpose of a pressure release valve. For such a high-intensity stream of the dispersant to be sent across so many miles of conduit, the possibility of buildup could occur but could also be mitigated by the computer system using the dynamic, intuitive venting overlay that sat compartmentalized into portions of its own – over the length of the sprinkler system. If a garden hose could generate enough pressure to where it was a capable of exploding, the result of the safety measure to prevent that would probably look like this.

The segmentation of these apportionments was necessary because the potential for the biological weapon to breach the array always existed and a successive cycling of the valves was more capable of being able to lob off any threat of capriciousness at the source rather than having one entire unit that could be compromised all at once by the brunt of a single hearty attack by the Deew. Now, bodies were not supposed to be making their way through these various recesses of the sprinkler system either because the generated stream would pack way more pressure than the Carriveaua or Human body could withstand and would make for a generally impossible swim against its extreme current that only aquatic races could survive, but the ducts had been designed to this particular specification of size so that people could traverse them for the purpose of performing maintenance.

From an acoustic perspective, the roar of the biological weapon became magnified and deafening within the hollowed tunnels of the sprinkler system which happened to have been prime for creating echoes while extending the resonance. If not for the Ear-To-Mouth Coms, communication between the contingent would have been impossible and disorientation would have surely resulted.

“Ten more meters and then turn right!” Barking out orders kept the soldier with the slate computer as calm as hearing something (other than the Deew’s frightening vulgarity) kept the rest of the contingent. She had morphed into Burdlit’s unofficial second in command during this strife, and the other soldiers followed in silent (albeit boisterous by its unanimous) agreement.
By contrast, Burdlit led the procession from being out in front of the rest but seemed to shrink away from the responsibility of leading the contingent outright. He had been mighty quiet since contemplating Janette’s alleged treachery as his thoughts had since turned to premeditation regarding what could possibly be done about it. To rectify the situation called for the simple confrontation from a spirited conversation among adults. Although, things would probably not stop there – spiraling downward as retribution might arise from out the prideful need of arguing parties to behave like children.

Burdlit remained undecided on the proximate tact. At some level, he knew why Janette was doing this. A person could not work so closely with another for so long and not at least feel something toward the other person’s plight – even if the circumstances were fabricated via the personal deception which caused them to even come in contact with each other in the first place. These were not attachment issues which caused him to become conflicted about how to possibly move forward, but they did contribute. The disappointment that arose from a potential master watching a prospective slave rise above the serfdom was fraught with taboo familial colloquialisms and twisted emotional sentiment which left the oppressor feeling like the victim in all this!

Luckily, Burdlit had friends in higher places who were likely making their presence known in the absence of his scheduled check-in and could keep him focused on the task at hand. These Humans were the vile, self-deprecating creation of a cruel Ethereal who probably sought to provide the universe with the biological fodder for generations of jokes, but the Carriveaua were not laughing. There was nothing funny about a class clown turning aimless antics into class warfare. And how was that even possible that this race of miscreants and degenerates could become so dangerous and vicious? If ever he had felt any inkling that there might have been some good in them, the idea washed away – right down these pipes with Janette’s disloyalty.
Upon turning that right corner, Burdlit arrived at a stubby halt. The abruptness not only caught him by surprise but the soldier who had been crawling directly behind and managed to accidentally trample over his tail in the process of following too closely and rear-ending the operational general as a result.

On the outside, which happened to be Level Z, an already rattled sprinkler system technician became (understandably) even more startled the moment the front-facing grate along with a chunk of its conduit was blasted out of the piping by a laser rifle and Burdlit emerged shortly thereafter. Followed by the rest of the ten-person contingent, the find sent the person off in elation to alert the nearest counterparts who all returned to greet a weary bunch with warmth surrounding the feat and conjecture concerning the means.
When those counterparts ushered Burdlit and the contingent away with a series of pats on the back, offers for nourishment, and reports of the turmoil occurring topside, the Deew felt this was as good a time as any to get in on that (nutrition part) as well. With a gaping hole, but any hole would have sufficed since the cumbersome size and shape of physicality was no longer a problem, the biological weapon sprouted a beautiful, new bud from out the officially unsealed Inner Corridor.

Terrifying from the perspective of nobody ever really seeing a plant grow but noticing its resultant growth, the technician was frozen by the suddenness of the flowery appearance. In some respects, maybe the Deew appreciated the offer of a sacrifice from not having to hunt that first meal down. In others – perhaps, it was just famished when lashing out like a Venus flytrap enveloping a catch within its flowery plume. Either way, somebody’s whim became satiated by the presented situation.
The technician braced with upheld arms of passive-aggressive resistance during the ensnaring. But braced for what?

The stripping away of the technician’s carbon component in order for the cannibalization of the atoms’ valence bonds to occur, for one. But what could that even conceivably feel like?
To the Deew, this felt like a tease, and it would have probably much rather preferred the taste of a more massive, silicon-based buffet. But then again, beggars could not necessarily be choosers. Yet.