“There are four things that I don’t like to talk about in public,” Boyd explained as Janette’s halted procession allowed him to leisurely catch up to her: “Religion, sports, video games, and politics.”

“Convenient,” Janette assailed with an accompanying head nod of spite as they continued down the corridor together. The urging was almost a bewitching insistence like an open challenge to prolong the discussion, prodding the intruder to fall further into her psychological trap. 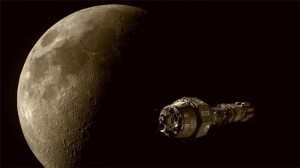 Boyd did not need to play Janette’s mind game, but he wanted to. It was not about getting the last word or getting the final word in but testing his beliefs against a living breathing representation of opposition and not the credibility gap from the naivete of his own doubts. The Space Force often painted a one-sided picture via lopsided means – namely the use of the Enforcers to further their interests across the universe. The faction was always prepared for war, but the costs to both blood and treasure were often staggering during massive interplanetary campaigns such as that. Black ops was so much more customizable – almost surgical to a point that its precision netted the added benefits of positive universal sentiment among other allied factions who were in the dark concerning the real extent about what was really going on beneath the veil of peace. He charged, “Freedom is not free!”

And Janette refuted the Space Force government line of propaganda with an explosive, “Freedom is free,” of her own, “but governments often want to find ways to cause us to become indebted to them for something that they have no business in lording over.”

“Look,” Boyd raised a telling left index finger of contrived patience to calm himself down as he argued, “you don’t know how many good men and women were lost so that your so-called Galaxy Bloc could act like it was absolved from any of its debt to Human society.”

“I can imagine,” Janette replied in earnest from her knowledge of the Space Force war against the Slorgs which prompted a souring in public opinion and spawned the mass exodus of the unincorporated planets, “and everything that was done to the point of our secession was appreciated. We don’t fault you personally or (here today) in particular for the decisions of your leadership.” She, like everybody else, followed their criminal impatience in the run-up and rush to an ill-advised and ill-conceived war of convenience between two of the universe’s largest factions. Thankfully, it had been fought to a draw.

Kalos 7 – a neutral zone and boundary which divided up the Space Force and Slorg space between the Quadron System and Explorigvasun became the mutualized excuse for this skirmish. Both factions were flexing their collective muscle when encroaching upon each other’s settlements by usurping additional galaxies for development. Neither sought out the diplomatic solution in preferring to opt for a physical altercation which tested their interpersonal mettle and tolerance for the fight – all the while demonstrating their military preparedness and prowess to the rest of the universe. Boyd acknowledged, “Soldiers, sailors, pilots – we were following orders during that war.”

Playing off the admission, Janette added, “We were following our hearts.”

Each represented an ideal from across the divide which was created by a gulf in Space Force leadership. Whether this deficit in vision by Leader One: Jerry Stuyvescent had been the result of him receiving poor intel or, worse yet, bad advice would ultimately be for the historians to determine. At the peak of a decades-long rise to prominence, this war was seen as the faction’s largest and only blemish during the current times. The prevailing sentiment encompassed not only Human but foreign weigh-ins as well.

The choice to engage in war was also a peculiar one because the outcome showed ineptness on the side of the Space Force and weakness on the side of the Slorgs. Media strategists often wondered openly about why that was. The Humans, though massively outnumbered, picked a fight that they could have ultimately won – having gone blow for blow with the largest faction in the universe and lived to brag about it. By default, the Slorg faction could have outlasted the upstart Humans in prolonging the skirmish – which was well within the rights of their eons-long existence to do, but the fact that an expected knockout punch could not be delivered meant that its own legs were wobbly. One seemed to be unable to pull the trigger with the momentum from a tidal wave of negative public sentiment bearing down on every facet of the military effort’s propagation while the other appeared to be calling out for help.

Old and wise was the Slorg Queen who had succeeded in reeling in a fracturing faction with the unity and pride which came from a war of necessity against Human aggressors. Despite the outcome, she enjoyed unprecedented favorability ratings in polling among Slorgs universe-wide – not seen since the earliest days of known space having been created. For her to be able to sanction joint terraforming exercises with the Space Force across what was basically the jurisdiction of their own system, Explorigvasun, could have only come about because of such ardent public support.

Again, this was all politics. But these very same politics had managed to cause a significant population of inhabitants to expatriate themselves away from the Space Force in droves and the eventual formation of Galaxy Bloc to come about in particular. The stomach which was needed for what amounted to be a bloody display of posturing became too much to tolerate. The reasoning behind a military solution becoming the go-to option in a situation where a series of diplomatic back and forth negotiations would have more than sufficed signified to the reigning governmental scholars of the day that the faction had meant to send a message about their strength and willingness to use it…to, perhaps, other factions.

“Our government makes mistakes,” Boyd admitted upon standing aside as they reached the elevator to allow Janette to enter the invitingly slid-open doors ahead of him, “because it’s made up of fallible Humans, but I don’t believe that they were simply looking to burnish their credentials at the expense of the Slorgs.”

“Who’s the one that’s being naive now?” Janette questioned and appropriately awaited the intruder’s unavoidable entrance into the elevator, creating a pseudo acceptance of the charge. As with any free society, the populace had a right to protest (which many of them did en masse) or an opportunity to leave (if they still did not wind up liking the progression of matters). “The Space Force has the makings of a borderline tyranny, and although Galaxy Bloc seceded away from them, we weren’t running. We were holding your government accountable so that it couldn’t take those next steps which might’ve required a lengthy period of penance to take back.”

To restore a universal reputation was always difficult, and the idea that other factions could gang up on the Space Force to impose a collective will against them was always a possibility, but Boyd offered a leading wonderment, “I don’t claim to know what makes my higher-ups tick, but I do know what I’ve seen through my own set of unfiltered lenses. What if there are factions out there which exist that happen to be even more predatory than mine?

It’s easy to sit on the sidelines and point and complain, but when things go down throughout the universe, who’s the first faction on-site to be able to offer assistance? Natural disasters – acts of Ethereals: What came from out of the war with the Slorgs was an opportunity to help those that lost everything – their homes, belongings, planets; to rebuild with this joint terraforming project in galaxies that don’t even have centralized suns.

Who’s the first to come to the aid of lesser factions like the Rylaea, for instance, that’d been marked for harvesting by drug dealers? We’re providing protection for those that happen to be incapable of protecting themselves.

Which faction is the only one holding the lunacy of the Doran civil war at bay? That thing is about to spill out in every different direction, including this one.”

These were all arguments that the unincorporated planets had been subjected to prior to, during, and well after having left the Space Force, but the root of the issue stemmed from their former umbrella’s unchecked power. Maybe, some within Galaxy Bloc wanted the rest of the factions to step up so that the Humans did not have to be the universe’s police. Perhaps, others held some concern with the number of bases that were being set up throughout known space as a dark, foreboding precursor to an unparalleled, unprecedented, and unrivaled hegemony. Still, a few of the more radical might have just wanted to see the megapower fail so that they could swoop in and build the pieces back up in their own ideologically-slanted image.

At this point, the intruder could not decipher what extent or which combination of those types that Janette happened to be, and this was exactly how she preferred things – clouded or enshrouded in mystery. But one item from his oratory had caught her ear as the botanist liberated the fateful codekey from beneath her lab coat, “Did you like what you saw through those unfiltered lenses?”

“I’m a professional,” Boyd responded immediately to the accusation of lewd impropriety on his part.

“Right…,” Janette dismissed the intruder’s notion of his standing as the elevator doors slid closed.