Cat and Mouse or Dog: It was interesting how the high level of coordination for the trap led to increased levels of frustration when the resultant failure to nab the intruder arose.

Inner Corridor was thankfully secured, but the person did not turn up there. The doors to a halted transport in Level O opened up to a line of laser rifle-toting soldiers, but its only occupant was Janette’s code key – wedged into the slot underneath the button panel and five potted plants which looked exactly like the ones that adorned the lobbies of the entrances to every floor! 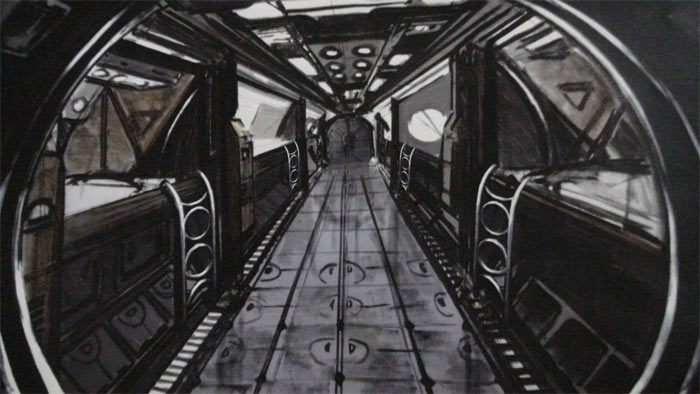 The bad but expected news was delivered to Burdlit’s contingent shortly after they left the outside of his quarters, charging down the corridors of Level Z for the start of their own entry into the hunt.

“The intruder was able to account for the weight sensors,” the soldier with the slate computer alerted. Transports needed an actual weighted body in order to function. “Five potted plants at about twenty pounds apiece were more than enough to trigger the accepted variance for that unattended return trip.”

Inside a darkened, unattended Level Z conference room, Boyd watched Burdlit’s contingent march down the corridor from beneath the room’s windows and their closed blinds – seated with his back against the wall. A totality of Galaxy Bloc troop movements played out beautifully across a split-screen of panels on his minicomputer as the enhanced vision of the Power Authority cameras now belonged to him. But this appropriated aid of surveillance was not the only thing that he possessed.

All of this was preventable. All of it! And the common sense measures were easy to implement. The Space Force did not tie authorization to a codekey, and even though plain, tamperproof identification cards were still used, the determining factor as to whether the supposedly authorized party happened to be accepted or not was the person’s biometrics. Electronic identities could be much more easily assumed than biological attributes, and old radio-frequency identification skimming technology plus the physical exertion that came from dragging potted plants all over the place proved this. The privacy advocates were right to be concerned about governments putting chips in everything but for the wrong reason: A government might very well have had noble intentions, but rival factions did not, so rudimentary technology such as code keys could be exploited like credit cards.