Evade and Seek: The Power Authority 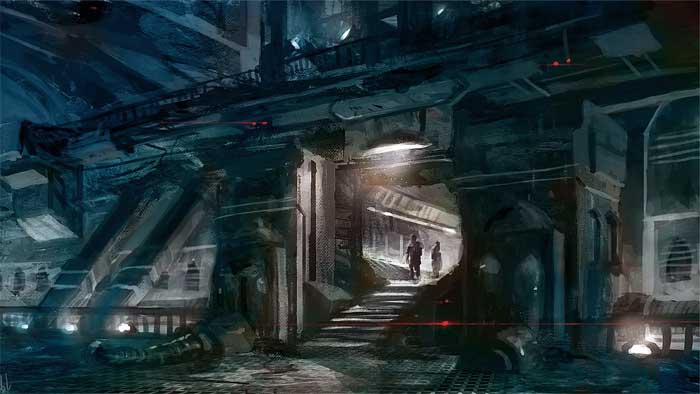 He thought that the sentiment was successfully muttered but soon found himself stumbling across his words in order to recover from an ill-advised personal opinion, “Uh – I uh…we’ll let you in.” Even to Burdlit, it seemed unclear as to whether the original reference pertained to Janette who he generally liked or the intruder that stole her code key.

Of the snafu, she seemed to be surprisingly more infuriated than apologetic, “I can’t believe that guy. I’m on my way back now – five minutes out.” Her voice fluttered as it kept in tune with the pace of a brisk jog, “Throw…everything…that you’ve got…at him.”

Open target practice on a Human? Burdlit did not need to be told twice as he collected his laser rifle from where it leaned against the arm of the couch on the way out of his quarters and pleasantly acknowledged, “Yes, Ma’am.”

A pair of double doors which formed the street level entrance to the Power Authority slid closed behind Boyd. Although he came prepared with a couple undetectable LUNC’s, a successful stint throughout this complex meant not having to use either of them. The unusually thick presence of Galaxy Bloc troops far and away outnumbered the amount of regular workers, but neither of those groups were on his side, so remaining covert made a whole lot more sense than becoming confrontational.

The Power Authority featured a main area which accounted for the bulk of the four-story complex from what Boyd had been allowed to see on the outside. The building featured window placements across those four stories, and scaffolding could be seen throughout, so heights could be reached, but for the most part, he stood within one massive floor. Not uncommon to synthetic planets in the slightest, large and powerful transformers were normally plugged into a planet’s core for the purposes of tapping a near infinite power source and converting the energy to something that consumers could use. There would almost assuredly be at least three more of these types of facilities around the surface of Dio Qze.

As Boyd meandered about the area, he could hear the pulsating hum of monstrous metallic structures, cooling fans, and their associative circuitry at work. It was a maze of cylindrical and rectangular infrastructure with railing for separation between units, step ladders for immediate ease of access to individual areas, and efficient floor direction of arrows or clear section markings that took the place of hanging or posted signage. Being more of a generalist in terms of physics, his real expertise belonged to observation, so the minicomputer continued to take note of any variances and record everything else for him so that he could deliver the information to one of the Enforcers’ technological gurus for them to be able to sort out at a later date.

None of the normal personnel or the military raised any bit of an objection to Boyd’s presence because for him to have even been inside of the complex, it must have meant that he belonged there. But Janette’s realization that her code key had been swiped was going to threaten to wear out his welcome, so he sought out the nearest transport that he could find from one of the many kiosk-type placements where they resided along the floor and sauntered inside – again behaving like he was within his rights to have done so.

Security measures did not change oh so dramatically from organization to organization or culture to culture, so of that natural agreement, Burdlit stood within a huddle of Galaxy Bloc soldiers – advising them of their next moves. He kept the circle of information small by only authorizing placements and subtle changes in positioning as a part of what could be described as a silent sweep. By the time that the intruder became aware of the dragnet, the person would have already been ensnared by the trap.

Woefully inadequate was what came to mind when Boyd thought about Galaxy Bloc’s attempts. It was a subject whose core warmed his heart and played dangerously close to the root of his occupation, but this sham of pacing patrols could not be referred to as…security. In seceding away from the Space Force, the unincorporated planets had succeeded in rejecting real protection. He literally just walked up into the Power Authority and was leisurely taking a ride all the way down as far as Janette’s clearance would allow. If this were any Space Force-aligned planet, a detail of troops would be waiting for him when he stepped out of the transport with open firearms. But because these planets like Dio Qze rejected the so-called invasive measures of biometric scans and DNA Recognition/Authorization – satiating their nonsensical approach to privacy concerns as a result, the Enforcer could have blown the place up two times over before anybody inside even realized that there was problem. About the only thing that they could track was the codekey, and he had reached his destination quickly so as to not allow that to become a factor.

“We’ve got a bead on the perpetrator,” a Galaxy Bloc soldier announced from a crouched position while referencing a layout of the Power Authority on her slate computer.

“Excellent,” Burdlit said as he moved to position himself over the shoulder of the soldier. His left first finger went to trace along the screen and follow the upward path of a pinpointed transport, but this particular movement did not sit well with him. “It’s a decoy.”

The underground levels were depicted in alphabetical order – beginning with the letter ‘A’ as the highest point, but they did not start at Dio Qze’s crust. This put the trajectory of the transport on path for the middle part of the alphabet as it ascended through a twenty-six level apportionment of the planet’s lower mantle. A secondary facility was constructed around the core, so the length of the journey took about ten minutes to reach that location where the lettered labels finally kicked in. Between Janette’s recognizing that her codekey had gone missing and Burdlit mobilizing to get the soldiers in place, at least one trip – almost the length of the world’s radius could have been made all the way down to the facility.

And what secrets the core housed – Burdlit did not even want to think about that. On paper, the task of running the intruder into his soldiers seemed quite simple, but in reality, carrying it out might not be so easy. There were too many levels to cover, four polar vectors in accordance of an additional three power stations to complete a quad worth of escape routes, and he only had enough troops to fully saturate two levels on a wild guess.

They were unprepared because this breach was unprecedented. Who in their right mind would break into a power company? On Carriveaua, Burdlit’s people had reason to do so because the power was nowhere near as stable as it was on Dio Qze – featuring frequent outages of the lengthy, unexplained variety. In that instance, what really bothered him (and a whole host of others) was not so much the fact that the power continued to go out incessantly so much as it was the understanding that their right to complain had been taken away. For as treasonous as the thought sounded, they then had the right to revolt against a government-controlled customer service catastrophe. These spoiled Humans could not relate.

Outside of the person having an unfortunate set of instabilities that could wind up coinciding with termination, there was always the possibility that this intrusion might have been professional in nature. The Carriveaua and Galaxy Bloc shared a mutual enemy in the Space Force, but seriously, how much damage could one attacker do? Famous last words. Being more of a generalist in terms of sociology, his real expertise belonged to project management, so he fingered his Ear-To-Mouth Com in order to rally the soldiers, “I need the four security teams to split up: Half of each should provide a perimeter defense around the surface of each topside entrance. For each remainder: Power Authority North, head to Inner Corridor. Power Authority East, begin a level by level search starting with Level A. Power Authority South, randomize your search. Can you stop the transport in Level O?” The operational general paused the secure broadcast to ask the soldier beside him.

She nodded and typed about the face of the slate computer to make that happen.

“Power Authority West,” Burdlit finished ordering, “head directly to Level O. We’ll be transmitting the exact coordinates of the transport in question….” He waited for the soldier’s mark.

At the conclusion of her work, she cradled the slate computer away, stood up, and looked over to say, “Sent.”

Satisfied with the initial flurry of maneuvers but ultimately disappointed with their reactiveness, Burdlit turned to a contingent of ten soldiers, unslung the laser rifle from his shoulder, and belted out, “Let’s move,” in hopes of turning around this early bout of misfortune.

Shadows of the Revolution – A November Sonnet