“We’re not all that different, Janette,” Burdlit’s voice asserted from somewhere within the muffling of Deew growth, but there was no time for her to slow down and ascertain where the pursuer lurked as she trampled across the biological weapon in the process.

Despite the grand obstruction of the Deew draping the long corridor which led to Inner Corridor, Janette could traverse the path with her eyes closed. The biological weapon was indirectly the reason for this but the mechanical repetition of arriving for work early in the morning (before anybody else even woke up) and leaving work late (well after everybody else had left for the evening) through the same manner each time happened to be the more blameworthy culprit. She spent so much time here that her legs did not need any further input from her brain in order to get her body to where it needed to be. Clutching that sample with a grip which could have crushed the sturdy container otherwise, obligation replaced weariness and fatigue with an unheralded responsibility: Escape at all costs. 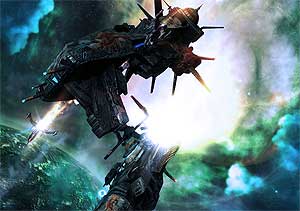 If for no reason other than to further rattle Janette into breaking the intense concentration of her frenzied evasion, Burdlit decided that his previous statement should also include some sort of accompanied explanation, “The Carriveaua and the unincorporated planets each fear the Space Force. But whereas your people fled from their tyranny, we militarized in the hopes of possibly standing against their megalomania.”

It was amazing how Janette was running as hard as she possibly could while Burdlit happened to be merely walking – sauntering along so as to not wind this unwanted soliloquy that the botanist was being subjected to, and only seemed to be a few steps behind her at all times. Maybe it was because she was weaving in and out of a mazelike garden patch which stretched upward of the ceiling, stepping over previously shredded bodies, and sidestepping the remnants of furniture plus equipment that might have been subtly displaced in the Deew’s upsurge but still remained ingrained in her memory of at least their proximity. But would not the operational general have to cross the exact, same obstacle course?

“I know that it sounds surprising,” Burdlit admitted. “The powerful Carriveaua were once…pacifists. I can hardly believe how far we’ve come myself, although it’s debatable as to whether or not we just took a giant step backward in mirroring the behavior of a faction who we’d hated.

The Slorgs became a megapower because of their sheer numbers. The Pillorian Regime were a megapower because they’re led by Ethereals. The Dorans had utilized science to create biological perfection – dare I say…immortality, so their place as a megapower was solidified. The Carriveaua were to be the first to reach a megapower status based upon our edicts of peace. Unprecedented, we had not picked up one weapon but were about to receive a well-deserved place in the history of universal progress.

Then the Space Force came along with an unconscionable war of convenience against the Slorgs, flexed its military muscle, and stole a place – our place at the table of megapowers. My prideful people fell flat on their as-es as the seat was yanked out from under them, and we were not laughing as this was not some simple game of musical chairs.”

Just as calm. Just as eloquent. Just as unforced. How was Burdlit doing this? Janette nearly tumbled across that last patch which had been concealing a loose, ankle-jarring waste basket out in the middle of what used to be an aisle, but there happened to be no deviation in the operational general’s cadence. It was like a stroll in the park to him, but still, the Deew remained the resident forest ranger with an ultimate oversight of life and death inside these lush limits. Not so much surprising as it was terrifying, the botanist seemed to be on the wrong side of a horror movie – living rather than watching. But since she was still alive, the need to remain that way drove her back to an upright posture of balance and the continued push to distance herself from the operational general.

Close enough to witness Janette’s stumble but not yet in a proximate range which would allow him to catch her, he continued to toy with the mind of his prey, “Though I don’t hold your botanical aptitude, I’m no stranger to agriculture. Back on our homeworld, my family used to cultivate prodos bushes. The common yield of just one provided enough nourishment to feed an entire family for one of your Human solar months. Who would have thought that the young farmer, who used to run around the pasture in sundial sandals, is now an operational general who stands at the forefront of saving our entire Carriveaua race.

I am not a monger. I don’t even have the patience to be a politician. I’m merely an agent of change. This next war with the Space Force threatens to drag the entire universe down along with it. That much is inevitable. The Pillorians and the Dorans are virtually unstoppable by themselves, but for them to unite would mean the end of your beloved Humanity. Honestly, I could care less, but there will…be…collateral damages. The Carriveaua would be easily smeared during such a bloody campaign as well as many other smaller factions – Galaxy Bloc not only included, but especially.

You can’t run away from tyranny. You must stand up to tyranny. By beating the Space Force at their own militaristic game, perhaps we Carriveaua can convince the other megapowers to stand down, and our legacy which was born and bred of peace can ultimately reign supreme as a new universal constant which calls for patience, tolerance, and acceptance. We’re not in this accolades, but we’ve been obligated to stop this cycle of violence – with violence, if necessary. Our next generations are depending upon us to step up so that they might have the opportunity to run along the pastures in their sundial sandals as we’d been afforded those same pleasantries from memorable childhoods by elders previous!”

In a universe where there was no such thing as good or evil – merely a difference of opinion, Janette had to silently concede a certain nobility to Burdlit’s cause. The Carriveaua were apparently fighting for what they believed in, but the unexplained part about terrorizing the unincorporated planets seemed to mar the entirety of that effort within a hint of hypocrisy. Perhaps in their minds, the sacrifice of their peaceful ways made this method of insanity in unleashing the biological weapon justified. There were too many confusing variables to ponder when she needed to be most concerned with putting one foot in front of the other…as quickly as possible. The operational general was trying to trip the botanist up mentally for the purposes of trying to cause her to slip up physically from the diverted-away focus of this evasive task.

And why not? It worked. After all this time, Janette had finally taken a wrong turn and found herself facing a dead end via the densest known concentration of the Deew’s presence within Inner Corridor – which was saying a lot since its overbearing saturation basically remodeled the entire facility to a jungle decor. But this location was different. She could have sworn that it was ‘where’ the lone window to the bowl-shaped area was supposed to reside and wondered about ‘when’ the biological weapon might have breached the facility. Any crack in the containment field would have answered the question as to ‘how’ (this occurred). Her use of a nanite transfusion graft addressed any lingering questions about ‘why’.

“I’d sincerely like to know ‘what’ you did to augment the Deew…,” Burdlit’s approaching voice said.

Trapped, Janette turned her back to the wall and one threat in order to turn toward, stand up to, and face another. There was a decent amount of running room to either side of the botanist which could have lead to a suitable destination, but less cover also meant that she would become an easier target.

At that point, the classic logic about ‘the shortest distance between two places being a straight line’ was proven in an unnerving realism of three dimensional peril as the forested drapery parted to allow Burdlit a smooth path of approach – almost upon his whim. He continued, “…but I’ll settle for what’s in your hand,” unslung his laser rifle from around his shoulder, aimed, and fired at Janette with the rapidity of spite in hopes of returning the favor from her past indiscretion when last fortunes were reversed and she had attempted to leave him down here to die.

But a seemingly disinterested onlooker was not about to allow Janette to perish, shielding her within the instantly unfolded arms of thick bark from a tree trunk-like cocoon. This was not the Deew’s budded envelopment which had previously fed and supposedly continued to feed upon the botanist’s comrades and counterparts but a helical wrap of its wooded protection that got between the laser pulses and their target, bouncing them off into the harmless abyss of oblivion’s gulley.

“No!” An exasperated Burdlit shouted out with a clutched left hand at the reality of a Carriveaua competitive advantage (potentially) lost as he continued to fire with his right hand to no sensible avail.

“How is that for standing up for what,” Janette emphasized the Galaxy Bloc perspective and response to Burdlit’s snide insinuation about the unincorporated planets’ supposed cowardice, “we…believe in?”

She Had a Reason

Through the Eye of a Child