Mexico did not exactly choose this lifestyle either, so as with the ongoing theme of triplicate, his remuneration also deserved to be examined. Differing from Captain Borcuk who made the willful choice and Boyd who had no choice, he had actually brought this on himself. 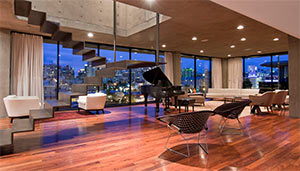 Although, it was not like that admittedly greedy self had never benefited from this arrangement of servitude to the Enforcers, and it was unlike him to go into any situation unprepared, so he usually just went with the flow.

In the short time that Mexico had known Boyd, his earnings had tripled, so these types of missions (where he was left to some wily devices in staring down invisible airships) were nothing new. Different, yes. Especially this time around. But the concept happened to be the same: Succeed and get paid. Fail and die. The Enforcer may have used extortion with the weight of the Space Force held over him, but the currency was still his master. And by that perspective, he leaped into the clutch performance of portraying an underground god.

A solitary right hand placed the LUNC on the rooftop prior to a compliant left foot kicking the weapon which skidded over toward the direction of the hovering, invisible ship. From there, and after standing back upright, Mexico’s arms went into the air – slowly. Corinna and Jocelin already stood with theirs also raised in a nonthreatening manner. None of them appeared fearful, and that should have been a warning for those who were attempting to accost their forward progress.

A warning which should have perhaps been heeded by the side which appeared to be the greater power, unknowns via sight from both sides created a stalemate of the protocol. Although Mexico and his intendants could not see the threat, they knew that it was there and played expectedly into its hands by following through on what was originally ordered of them and marching over toward the doorway near the center of the roof which had a stairway beyond the entrance that led inside the building. By the opposite token and since nothing of their approach deviated from the norm of prostrate and surrendered prisoners going through the motions of accepted futility, there was no way in which the Carriveaua could have seen that any sort of additional danger existed.

After all, the male had laid down his weapon and the females were unarmed.

Each was dressed professionally with Mexico in his aforementioned suit, Corinna wearing a figure-hugging cocktail dress, and Jocelin donning a pantsuit of her own which honestly left no curves to the imagination either with its tight fit. Through a bit of fashion design, their ensembles all seemed to coordinate nicely via the obvious brand, stitching, and thread choice, but the elegance included a lesser-known functionality in the presentation of being unassuming. Clothing made Humans behave in certain, distinct ways that wound up giving away the purpose of their vocation as well as an indication of their threat level. These wore dress shoes and high heels rather than combat boots and were little more than hostages for the taking.

And if that was what the invaders believed, then they were right as far as Mexico was concerned. His LUNC was just for show. But that was only because he never did his own work.

Baited from out the precept of an assumed superiority in this instance, the invisible airship (which continued to make traversing the rooftop sluggishly difficult for Mexico and his intendants beneath the windy push from its powerful thrusters that wilted the air along the ripple of their focused flames) revealed a side area of itself as a ramp door pushed downward at the behest of hydraulic plungers. This was still not enough data to be able to describe the type of ship however, but the Carriveaua troops (that emerged from the vessel’s innards and leaped more than thirty feet to the roof) gave away the now obvious origin. It seemed to be incapable of landing on the platform like the much smaller shuttle, so this functional limitation also gave an indication about the potential size.

Of more immediate concern were the six laser-toting Carriveaua troops who had arrived to ensure Mexico and his intendants’ unsafe passage. As to where, that piece could not be speculated upon at present. The trek across the roof had been a tedious one, but it allowed him a chance to gather some additional perspective on the situation. That ship might not have been in a position to be able to fire down upon theirs and certainly not now with its own troops on the (relative) ground. Plus, the fact that it was still hiding meant that they had not yet achieved aerial supremacy over the skies of Dio Qze. Bombing away from afar in orbit was one thing, but that merely net a stalemate when Galaxy Bloc’s army was capable of firing right back up at them with the terrestrial battery placements. This group was meant for surveying and injection – possibly strategic operations, a death squad dependent upon their mood and objectives at the time.

But it was not a time for Mexico’s mind to wander over to the typical doling out of blame in Boyd’s direction because there was absolutely nothing that the Enforcer could do for him during this instance. For such a powerless individual, he sure kept some lethal company around him to more than compensate for his many combat shortcomings. Because of that, ‘tactical’ was not one of them.

Physically imposing, the Carriveaua were dangerous without third-party weapons. Coupling their biologically inherent abilities with Envenom Blasters did not make them indestructible, but it did make them selective. A futuristic tranquilizer gun, its main purpose was to incapacitate through an interesting use of their own bodily secreted venom as the main yet much weaker lazing material than the typical laser fluid that most other weaponry ingested for ammunition. In temporarily stunning the central nervous system, the neurological attack left the target intact. This was not a race of savages after all. They were not Humans.

The same could not be said of Corinna and Jocelin who, after being frisked and found to have held no weapons, made their move. Three Carriveaua had been afforded the task of ensuring that Mexico and his intendants were unarmed while two held back in case any funny business arose and the last troop collected the LUNC in stride of the calculated approach. In order to do the weapon search however, it meant that half those troops were unarmed with Envenom Blasters holstered while performing the official grope.

As unemotionally as had Corinna accepted the violating touch of unscrupulous hands across her flesh did she drop her left arm into a vice grip clasping around the Carriveaua troop’s right arm that belonged to the right hand which had just finished reaching up under the dress to investigate one of her most private areas. With the trickery from sleight of hand, the intendant quickly dropped her right arm behind her back before bringing her right hand back up with a Seor Laser nestled comfortably in her grip. This actually worked because the troop stood in the foreground and the others were incapable of getting off any hope of a clear shot, lest they pick off their own in a bout of friendly fire.

The concealable Seor Laser was marketed more toward women because it could be tucked away easily inside clutches and purses or (inapparently) other places, but this did not mean that the weapon did not pack a serious wallop as seen by Corinna electing to sheer off the arm of the Carriveaua that she had in her grasp at the torso which put that person down immediately. An explosion of the troop’s vital juices erupted out back of the collapsing body upon laser impact and expulsion like a viscous pool of bubbly liquid that now painted the rooftop in the near vicinity.

During the obvious confusion, Jocelin had kicked up her right heel against her Carriveaua obstacle and used the rather pointy part to slit the person’s throat before maintaining incredible balance on the pitted left foot in order to shift the ferocity of her momentum back the reverse direction for the purposes of raking the heel across the troop’s face and putting another down. Dancing backward and jumping to the side in avoidance of the intense stream of life liquids which now coated the staircase doorway, she dropped her own Seor Laser in hand unbeknownst to even those who were watching this display in shock and not only took aim but took off the head of the Carriveaua who had the responsibility for frisking Mexico.

The cranial chunk which went flying from that skull was somewhat disconcerting to him in witnessing that at such close range, but he would certainly take this turn of events over the alternative. Not one to rest on his intendants’ precision laurels because there were still three – no wait, one after Corinna and Jocelin shirked their own Carriveaua shields to loose a singular shot (each) to a couple more victims; he hurried behind them to get the door to their escape open.

This left the hovering ship powering away from the roof to better position itself and a bumbling Carriveaua who held Mexico’s LUNC but did not realize that the weapon featured DNA Recognition/Authorization technology and could not be fired by anybody other than its owner. As a result, the person received an awful shock to the hand which left the troop wide open for another singularly efficient pulse from Corinna’s Seor Laser – cut down at the chest and dropped ever so nicely into the fetal position of a fatal slumber. Dashing along in those vicious heels, Jocelin completed the teamwork by bending down to scoop up his weapon before busting back the opposite direction like the line sprints of interval training.

“¡Muevete!” Mexico ordered while holding the door open for his intendants. Corinna rushed through first followed by Jocelin who handed him back his LUNC. As soon as the three of them made it inside, the doorway and a good portion of the connecting roof were obliterated – thanks to some timely (or untimely, dependent upon one’s perspective) retaliation from the invisible airship.

Jack Eason Dec 5, 2010 1
Reading or Writing Have you ever heard the old adage that doctors make terrible patients? Well to my mind with a…
Publishing