And if beggars could not be choosers, Janette certainly could not win for losing. There was a distinct sect of people throughout the universe who absolutely refused to use elevators when a secondary option of stairs presented itself.

For some, the healthy power walk beat a lazy ride. For others of the leery, this exercise happened to be more rooted in safety than fitness. Though rare, they had heard the horror stories about the elevator getting stuck during power outages and plummeting from fluke accidents or poor maintenance, and avoiding it allowed them to mitigate some of that risk by taking destiny out of fate’s hands and placing it squarely back into their own. Only for the botanist, and the droves of workers that labored daily beneath the surface of Dio Qze, there was no alternate method of travel available for reaching topside. The distance between the ground level and inner corridor happened to be much longer than a skyscraper’s height and featured twice more stop-and-go security to boot. She had no feasible choice in the form of transport and now was left begging for safe passage. 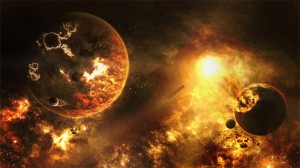 At first, the elevator stalled abruptly. Janette was thrown from her feet and the canister with the Deew sample went flying through the air to coincide with her own propelled body. Thinking nothing of personal safety, she searched around frantically for Galaxy Bloc’s salvation in the dimness and eventual darkness of flickering lights that unfortunately decided to remain off. There was not a lot of surface area to be combed through inside an elevator car, so the botanist was able to safely corral her lost belonging plus check it over with the analyzation of touch to determine the item’s intactness. But just like any presumptuous sighs of momentary relief during the madness of these past few hours, the comfort was short-lived. And she was hoping that the rest of her life would not be as shortened by these next terrifying moments which included the transport plunging like the initial drop of a roller coaster – except without any vision concerning a potential recovery and only an extreme powerlessness in assumption regarding its cause.

Tightness and closeness, the compactness of the elevator seemed to squeeze the very thoughts from an otherwise brilliant mind as easily as the panic induced the shortness of breath from petrification during a claustrophobic nightmare and its suffocating encasement. Trying to recover some form of composure, Janette sat on the floor of the transport – holding her knees with her face pressed in between them and the Deew sample lodged between her legs and belly. She had even found herself rocking back and forth uncontrollably while the letters to the various levels of the Power Authority which lit up the floor selector console went backward at an accelerated pace to coincide with the miles of distance that were being lost. From Level B to Level D – potential escape had been mere minutes away. After passing Level O, the botanist was now moments away from a smashing defeat.

Level P lit up on the console.

Ten seconds per level. Twenty-four levels of frictionless free fall equaled four minutes of opportunity. Well warranted, but sitting around like a coward left Janette with a little over a minute to think this through.

And, she just passed Level S….

Her thoughts quickly shifted from the superfluous ‘why’ variety on over to the ‘how’ kind. Its assortment of answers led the botanist to question the biological weapon’s beta phase strength based upon a number of different facets.

For one thing, Janette made an assumption that the Deew was still not powerful enough to break out the other seven sectors of Inner Corridor. Regarding its push for satiation, the biological weapon must have thrown all its weight against the springboard of containment so that it could free itself during one explosive upward incursion through the compromised eighth sector. This was the second thing that she considered. Lastly, a certain edge on nimbleness needed to be conceded to the gigantic plant on account of her having augmented…

Levels T, U, and V whizzed by during the contemplation.

…the Deew with nanites. Outside of an energy field, even the tiniest little bit space was sizable enough or more than suitable for the biological weapon to be able to fit through with ease. This included the supposed airtight smugness between the elevator and its adjoining shaft system. And air molecules were much larger than subatomic nanites – presenting, from their tiny perspective, an almost ten-lane super highway for the purposes of traversing.

Cables and pulleys were no longer used because the distance between Dio Qze’s surface and Inner Corridor was much too steep, so electromagnetic risers were instituted wherein the transport would latch onto the nearest attraction point and ride it toward the eventual destination – up or down. But again, this was not one, successive continual field, and if anybody ever had the chance to play with toy magnets, they would recognize that those objects could be separated as well as split by threaded matter like paper and still perform their attraction and repulsion duties. That field was otherwise weak – even when its power was amped up in basic applications such as this.

As easily as the biological weapon had made its way through a microscopic crack in the containment field to escape Inner Corridor was it going to be able to make use of that nanotechnological finesse (rather than the previous alpha phase brutish form of muscling its horticultural overgrowth up through, all around, and out the wide open spaces) to escape the Power Authority. Architecture could not stand in the way of such hunger, and the once fortified barriers called walls merely needed to be circumvented under the clever yet desperate auspices of this famishment. The Deew must have made its way in between the elevator and the electromagnetic risers – throwing the precision system completely off kilter and preventing the emergency brakes from properly engaging because of their inability to latch onto the foreign botanical material!

W, X, and Y were the next passing levels.

The scientific play was on manipulating polarization! Janette might not have been an engineer, but she was desperate, so the botanist pushed off the ground, rammed her codekey into the console slot and screamed out:

“Recalibrate stopping protocol,” as the elevator console lit up with its own heart-stopping letter ‘Z’ as the fateful announcement of her arrival at the end of this journey, “using nanite transfusion graft parameters!”

When the momentum devices kicked in and smashing into the ground floor at Inner Corridor did not occur, Janette stopped breathing. If it were to be her last breath and this last ditch effort had not worked, she simply refused to utter it.

At the risk of suffocation, a lightheaded Janette ordered, “Galaxy..Bloc..General..override..authorization…open…doors,” to which the elevator complied and instanced just how close she had come…. Having come this far in acquiring a stabilized Deew sample, the glum preview was close to unthinkable.

The elevator sat between the Level Z and Inner Corridor floors – meaning that Janette was seconds away from a horribly uneventful splat, and the future of the unincorporated planets inside that container would have joined along with her. There was the potential, after hopping up to reach the floor where the transport had partially passed, that she would have just enough room – about three feet, to pull her body through the space which was capped off by the car’s roof.

“Hey,” somebody from above (actually on Level Z) called out, “I think that there’s somebody in here!”

Why could it have not been the intruder instead: “Janette,” Burdlit cooed before reaching his arm down into the crevice, “give me your hand.”

She backed away from the ill-boding offer and finally exhaled, almost preferring that the faulty elevator be reafforded the chance to do the deed instead.

The Temptation of Vengeance

Pat Bertram Aug 19, 2022 1
She Says He Says Men and women both check out the other sex, but who does it more? Women. Recent research…
Publishing