That was a good penthouse apartment as well as a decent link and interesting way to try to trace Boyd’s movements. In the long run, things could become quite suspicious if he chose to never return (or ludicrous if he did return and showed his face), but there were also decisions that needed to be made which would affect Dio Qze’s short-term future.

Being an Enforcer was not just about black ops but networking as well, so options existed for dealing with tying up loose ends.

Not many ships were out in this space, so the flight became somewhat hypnotic with the absence of landmarks and only sparse starlight to light the way. It reminded Boyd of long drives down cultivatable, barren highways at night. Thanks to the Class V Fighter’s autopilot, he (again) did not have to worry about smashing into anything or flying off course while removing his hands from the twin yokes in order to type away with ten fingers on the keyboard to the console controls. This flight was taking a little bit longer than the Enforcer had expected because SpaceStation Konxerus had relocated positions on path to the Galaxy Bloc world of Venimus 3, so his arrival was going to be unavoidably delayed as he flew to catch up with a spacestation which was heading away from him at a significantly faster pace. And that was not exactly a bad thing. 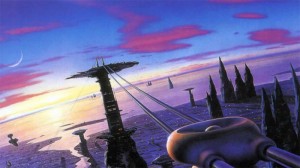 On the monitor which sat between Boyd’s legs, a different type of whereabouts were pulled up. More of a personnel tracker, he had locatable visual of the assistance that could help him. The slender left column (which took up only about a quarter) of the screen featured the exact coordinates while the remaining three quarters displayed a live feed of some startling hot tub festivities.

“Put the shirt back on, Mexico,” Boyd teased – speaking through his Ear-To-Mouth Com. “You aren’t all that.”

“Señor Boyd,” Mexico greeted disappointedly, “we’ve got to stop meeting like this – literally.” His first instinct was to cease sloshing around the bubbling waters in order to look around nervously for candid cameras. He would never find any though because Solstice Satellite was the culprit, and the Space Force’s largest base plus most powerful weapon happened to be all-intrusive from a prying standpoint. Thanks to advanced facial recognition software and virtually unlimited camera angles as a result of the communication beacon network throughout much or the majority of known space, the position that the satellite found him in did not even matter because Boyd’s vantage point would soon zone in on the appropriate face-to-face video which would allow them to hold a serious conversation across parsecs of distance.

Not sure what to make of Mexico’s frolicking around with his scantily clad intendants, Boyd’s mind once again turned to the inquisitiveness of a specialist when wondering where in the universe Corinna and Jocelin concealed their weaponry. He just knew that they were armed, but somehow, never being able to quite answer this question of ‘how’ seemed to only add to their deadly mystique. Keeping things on topic however, the Enforcer ordered, “Can you please head over to Dio Qze, and make arrangements for my apartment to be cleaned out,” even though it sounded like a request.

Clearly not in the mood for Boyd’s demands as all the oxygen had been sucked out the room when Corinna and Jocelin began exiting the hot tub area in a biting display of lost opportunity, Mexico pretended like he had a say in the matter, “My night is ruined. What’s in it for me,” and clearly that was not the case.

“The rest of your life,” Boyd responded in keeping with the fact that he was not asking for anybody’s help but commanding Mexico to do the job.

“Hmm,” Mexico sighed before sitting back down in the hot tub with his arms spread wide across its circular rim, “I guess I can live with that.”

Boyd added a slight chuckle, “You’ll have to, old friend.”

And Mexico did not like that designation in the slightest, “¡Nunca se dice eso! No estamos amigos.”

“Besides,” Boyd looked on the bright side, “I’ve happened upon an angle which you might like. I still need to flesh out a few things though.

When you get there, keep your ears open. The unincorporated planets are planning something big on the trade front which’ll make Indra Pallavan look like a championship game office pool.”

“Do I get any details?” Mexico wondered.

Shaking his head in the negative, Boyd stated, “Not yet. Play this naturally. You’ve got the perfect cover plus an unlikely ‘in’ with your current standing and business dealings. Keep me posted on anything that you learn. Have fun. But be careful.”

Mexico replied honestly, “I don’t like that last part.”

“Yeah – well, I’m starting to find that I can’t please everybody,” Boyd said before discontinuing the feed. Mexico would handle his part admirably. Money was involved, so he could flourish in a natural element.

The good life. Everybody craved it, but even those who had achieved it rarely had any time to enjoy it. Being at the root of Galaxy Bloc commerce by being in the heart of the Indra Pallavan Trade Routes, a select few who ‘made it’ could often be found at this lavish open-air resort, kicking back and kicking some sort of tall libation back as they did so. Palm trees formed much of the exterior enclosure while village-inspired huts created a wonderful jungle design for the interior compound. The ritzy colony might not have been from the nudist variety, but there was no shortage of skin being shown by the guests. With a pleasant climate of about seventy to eighty degrees and no threat of skin irritation issues because the lighting was artificial (being that most of the synthetic planets throughout the Quadron System resided in areas that featured no centralized sun), there was no shortage of flesh and only a delectable visual feast to be had by the discerning connoisseur who could appreciate such hedonism.

“Pinche,” Mexico called Boyd as his own Ear-To-Mouth Com went silent. He happened to be one of the ones who was trying to appreciate such sights but wound up plucking himself carefully out the hot tub and heading over to a carved-out log table where a plush resort robe lay across the top. It was warm hopping in but a little chilly when getting out, so the cotton fabric served to equalize the temperature of his body until he became capable of readjusting to the mild climate on his own – at which point, the robe would start to feel a bit too hot.

Corinna and Jocelin were off by their respective sides of the table toweling off. Calls from Boyd often signified that a side mission was about to commence, so they silently awaited direction from Mexico.

He stepped into some sandals while tying the belt to his robe and said, “Get dressed. Señor Boyd wants us to check out Dio Qze. That’s not normally one of the unincorporated planets which happens to be on my radar, but he seems to believe that it’ll be worth our while. I’d settle for it just being worth our time.”