Record: “Dominar Verasco, distinguished members of the Galaxy Bloc council, my mentor – Doctor Bigwood, assorted colleagues, and various individuals from my surviving family; I’m making this report in earnest, so should the black box recording from my Ear-To-Mouth Com be recovered, you’ll understand the reason…”

The game has changed by the mere fact that the unincorporated planets are now seen as players. It’s too early to be calling ourselves contenders, but I do feel responsible for having let the cat out of the bag. Or perhaps, the plant out of the pot.

They know. They both know.

The Space Force was the first to catch on. Now, we’ve known for a while that they’ve had us under surveillance because of their behemoth Solstice Satellite which pretty much keeps watch over four entire systems, but this invasion of privacy is also being taken to the level of boots being on the ground. They walk among us. There’s no telling who could be one of them or who could’ve been influenced by them. I don’t even want to think about who’s been replaced, but these are all things that are beyond our control. 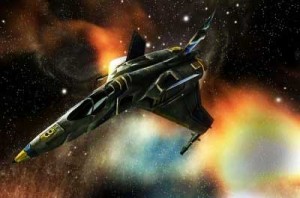 It sounds like an excuse, but I was personally made to be the target of a surveillance effort. My movements, my patterns, my life – they were all dissected and scrutinized until they became nothing more than data points in a scheme which would see to their exploitation. A Space Force agent got his hands on my codekey and infiltrated the Power Authority. Before I knew it, he was already on his way down to Inner Corridor….”

Speak to me. General, how did things go topside? Not good, huh? It’s to be expected. No – I know. He’s a spry one.

Okay. That’s a lot of damage for one person, but he was just posturing. Yeah.

I truly believe that he’ll come around. For any of us to survive this, we’ll need his help. The peril came upon us too quickly, and though I’d never admit it to him or anybody else, for that matter, the Space Force may be our only way out of this.

Oh, his loyalty lies with himself. My having taken subsequent breaths after our formal introduction proves it. He’s not stupid enough to betray the Space Force outright, but he’s also smart enough to realize that they’re not his friends either. I can’t quite place my finger on the reasoning behind the behavior. I’ll admit that its prospects are intriguing though – if not worrisome for their very same random part that they’ll wind up playing in our fate.

Calm down. This is not the time for you to go after him. It’s something that we can address…later, and you’d obviously be my first choice to handle the hunt. If he’s as resilient as he seems, you’ll get your shot at him, but maybe you’ll not crave it so when the chance is upon you in actuality.

Right. Yes. True. Believe me, I’m not debating your abilities. I just doubt that he’ll acknowledge them because we’re not his enemy at this present time, and he’s going to treat that lack of concern for our threat with a dismissive viciousness which will free him back up to be able to deal with whatever…is a threat. Just be careful with that. I don’t want anything to happen to you. I don’t want to lose you over anything but certainly not to something as meaningless as the need for petty vengeance (gone wrong). Oh, absolutely. We’ll pick our spots on that.

But right now, we should be mindful of our priorities. The Deew situation has become problematic. And we’ll need to move quickly. So, begin the planetary evacuations immediately. I hate the fact that our own displaced citizens need to be divvied up among the planets in order for their respective arrivals to be accepted without taxing the locale, but our food and resources are in dismal short supply. Do your best with the situation. Try to keep families together when possible, but get them all off this planet.

I’ve got a few more things that need to be taken care of down here. I’ll be along shortly after that.

I love you too. Talk to you soon.

Now, where was I? Resume recording:

“…Something happened down there between the intruder and Operational General Giz. Somehow, the Deew’s containment was breached. Someway, their battle created enough of a fissure within the ecosystem that we’d installed to keep the biological weapon in stasis that it was able to escape. Somewhere along the line, the nanite transfusion graft made all this possible. Sometimes, we’re almost too smart for our own good – never stopping, although many on your side of the view-screen probably wished that we had…”

Scratch that – all the way back to the word ‘although’. Resume:

“…and I’m hoping that a silent majority of you from your side of the view-screen will understand that we ultimately meant know harm. Somehow, when our day of salvation arrives, these sacrifices will hold meaning: The lives that were lost here, the home that’s also about to be lost during this, and the one soldier whose sacrifice may leave him maimed with the loss of an arm.

On that subject, I move that Walten Uchbinder be commended for exemplary service above and beyond the call of duty. It’s not much in terms of decoration, but I’d like his valor to at least be recognized…”

Save. Upload. We’ve found ourselves inside an interesting predicament, and the Carriveaua will not be happy about our response. Hmm, that’s an angle which has yet to be explored. It still behooves us to play nicely with them for the continued supply of these Deews. If my findings aren’t successful, or the science of everything that we’ve done doesn’t even make it off this planet, somebody else can at least keep the search going. Resume:

“…The biological weapon is perhaps the closest thing to an energy vampire that we’ll ever know. When Dio Qze was originally populated, we pulled the majority of our power from the core like most planets that don’t exist in systems with centralized suns do. Like a good number of Galaxy Bloc worlds – cheap properties which allowed us to secede at bottom basement prices, by the time that we realized that we’d been swindled, the Deew was starting to become much less dormant. Its stomach was rumbling, and we needed to try to find a way to satiate that hunger.

Energy transfusions did the trick for a while until we realized how this thing really worked. In times of weakness, the biological weapon finds its strength. Except, when the Deew finds its strength, it tends to want to maintain, so the requirement for power started to become staggering (if that were a metric) and exponential as the time went on.

We’d put off our demise by feeding the biological weapon and making it stronger, but in doing so, the Deew became strong enough to destroy us anyway and continued to inch its way closer toward the alpha phase. That surely would’ve been reached much more quickly had we done nothing, so I devised the nanite transfusion graft.

A blessing – a curse, I don’t know yet. The process of grafting nanites onto the Deew through the very same energy transfusions that we were using to feed it presented us an irresistible opportunity to try and rewrite its inexhaustible maturation processes at a cellular level by redirecting the previously unchecked growth to something that we could use: A harvest yield.

What we didn’t see coming was the biological weapon’s instinctive command over the nanites. Whereas ours was more overt, its was subjective in every other way as it pertained to the Deew’s own survival.

I believe that the biological weapon utilized our nanites to reformulate the properties of its own self. In more simplified terms, everything is porous to the microscopic. When the containment field was severed with a subtle tear that not even an aided eye could decipher, the Deew was given a chance to seek out the energies that it desired at its own digestive pace.

How to defeat this thing? I’m not sure, but I don’t plan on leaving this planet until I figure it out. The rest of the unincorporated planets have enough issues. This one just happens to be my problem and my responsibility to fix. Should I not succeed, please know that I gave it everything that I had. I’m sorry….”

At the Gift Shop