Angular Trifecta 10: Not Even Trying

The minicomputer continued to record while Boyd stood by in astonishment – in silence, stunned by the revelation of a homegrown threat which was nesting not only beneath the surface of Dio Qze but right under the nose of the Space Force.

He happened to be staring down the explanation behind the uncanny agricultural overgrowth topside, but this answer was indistinguishable from the further questions that it elicited. And yet, time had not frozen for him as the Enforcer continued to lock eyes with fate during an intermission of mutual sizing up which allowed the many pursuers to catch up to his position.They would meet again, but Boyd was sincerely hoping that the reunion would be with him aboard SpaceStation Konxerus – watching as its Mulgulous Weapon obliterated the planet, and he was almost positive that the plant knew. 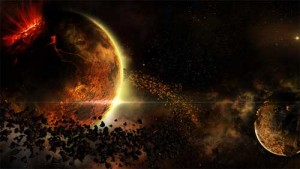 Nothing could grow to the size of a planet’s core and the prominence of its (only) imaginable strength and not know. Like any other living being, this abomination was going to do whatever it needed to do in order to survive and thrive. Taking a cue from the instincts of an unrecognized entity, the Enforcer reached his right hand inside the trench coat and took hold of the butt of the LUNC which happened to be oppositely holstered – facing outward on his left hip.

What was Galaxy Bloc thinking? Or worse yet – planning? Figuring these questions out hinged on Boyd’s impending survival, so an overhead unveiling of the LUNC allowed him to hold the handgun comfortably in a grasp at the end of an extended right arm along his shoulder level – and the charging soldiers at bay. He sent laser pulses in their direction which caused each of them to scatter back behind the timely cover from within the aisles of cubicles as the offense-minded energy projectiles ate up the direct pathway between him and his pursuers’ initial approach by tearing chunks out of the carpeted floor. True, he was not a sharpshooter, but those were merely warning shots, and the proven point happened to be that the Enforcer did not even need to get close in order to do some serious damage.

LUNC’s were their own arsenal. And only the Space Force possessed access to the powerful handgun, so this was something that the Galaxy Bloc soldiers had never seen before. From the intensity of the collective reaction in evading its defense-minded attempts, Boyd recognized caution in his pursuers’ advances but wondered where the same apprehension applied to the massive alien plant on the other side of the window. Was this only pride at work here? He sought out to test that theory.

Certainly, a well-known generalization by the Space Force about the inhabitants of the unincorporated planets was that they appeared to be both stubborn and hardheaded, but Boyd wondered if these people were also stupid. His minicomputer was managing short-range biometric scans much more easily within the radius of this bowl-shaped area, so it gave him the chance to track the paces of a mounting opposition. The onscreen map utilized an adaptable piecemeal renderer which built its atlas from the ground up in the rare times like these when Solstice Satellite’s prying eyes could not provide the topographical data straight to a user’s fingertips. Each area that he had traversed within Inner Corridor would then be added to an inversely-assembled puzzle – the conglomerate of which continued to be unveiled with forward progress. Similar to the limitations of the enhanced sight being whatever locations were previously uncovered, his gauge of Galaxy Bloc soldier numbers happened to be as equally skewed in a conservative short of anemic estimation. But that did not matter because they could see him.

Whether by a simple visual confirmation – ducking in and out from around the cover of a cubicle or by being made privy to the potential decryption codes which could free any computer-aided eyesight from the looming blackout surrounding this immediate area, it did not matter. The fact of the matter was that wherever they lurked, Boyd’s simple maneuver of placing his right arm across his chest in pointing the LUNC toward the window which stood between that plant and this bowl-shaped area caught the attention of those whom he could see and caused them to stop in their tracks. Assumption stood a pretty good chance of being correct if its angle concerned the others throughout the remainder of this massive Inner Corridor also being halted. For him to have offered the earlier demonstration of the handgun’s abilities left everybody’s mind (including his own) to ponder how the weapon would fare against the divider which was apparently keeping the rest of the planet safe from a weird botanical core.

These people turned out to not be stupid after all, and this was supported by their response to Boyd’s sudden re-aiming of his LUNC to be able to fire off a few pulses through the rows of plywood cubicles that surrounded his position – aided by the handgun being paired with his minicomputer for segmentation targeting purposes. No, he was not a sharpshooter, but the built-in governor which prevented him from hitting unwanted targets (such as the Galaxy Bloc soldiers) sure made it seem like he was one. Sparks from exploded workstations burst outward and dust from the rest of the obliterated workspace spewed upward under the strain of unforgiving lasers. With the resonance of a jarring sound that emanated from incoming laser fire echoing away to a past tense, the carnage began to subside into a tepid devastation while the troops fell back and settled upon new positions. Just to make sure that nobody among them got any bright ideas of wanting to become a hero, the Enforcer retrained the barrel of his LUNC on the window. He was in complete control of their actions – again causing them to freeze, pause, or at least hesitate some; so this meant that the entire situation was completely controlled by him.

Not one to leave his own fate up to the graces of what seemed like an alien biological weapon from a novice albeit skeptical perspective, Boyd’s combat gear came equipped with gauntlet technology which was capable of creating a personal shield out of a person’s life force energy. Should matters have come down to him becoming reckless with the LUNC and opening up that plant’s direct access to the rest of the planet via a lightly coordinated agitation with the most powerful handgun in all the universe (read: shooting at it), he might or might not have been protected from whatever its unknown effects were until his fighter could swoop in to retrieve him for a possibility of escaping Dio Qze.

But that was a big ‘if’ and an even bigger gamble which would leave the Enforcer without the requisite knowledge that could aid the Space Force in potentially pinpointing anymore of these uncanny botanical instances or launching an assault to cut them off at their presumptive Carriveaua source. In this situation, he had the power, but that was really only because the ability to leverage these seemingly insurmountable advantages happened to have been derived from using his brain to outwit the Galaxy Bloc masses who hunted him. Mind over muscle needed to continue to prevail if there was going to be any hope of seeing these numerous questions through to any sort of a sensible answer.

At the end of the day, Boyd (and even the Space Force) wanted to help the unincorporated planets despite their refusal to accept any. It was not, however, his intention to cause these people undue harm, so the bluff was just that. If he was at all serious in any sort of malicious aims, the Enforcer would have been brandishing both LUNC’s by now – double-fisting them for the elimination of everybody on sight and without remorse.