A Very Good Day: His boots crunched on twisted, broken remnants of once proud trees that lifted their limbs to the heavens.

A particularly loud crack shot off like a pistol round, echoing and not coming back; like these trees that would never return to life. 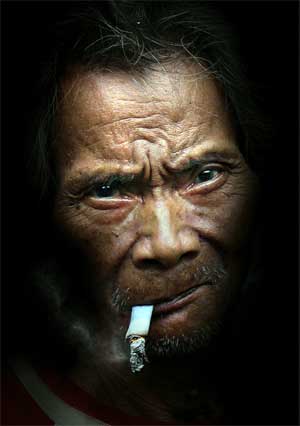 It stirred his heart, this scene of destruction as he lifted a cigarette between ochre-stained fingers and took a soothing drag, letting it fill his lungs with the mist of the dead.

He held it inside, savoring the sweet taste, holding it like an old friend before exhaling slowly and letting the smoke rise from his lips like bony fingers.

As he surveyed his field of dreams, his lips warped in a self-satisfied smile and a glint of sunlight stabbed through murky clouds, drawing the flame from his eyes, the memory of what he had done.

He flicked the stub and watched it arc gracefully until gravity dragged it down to meet the ashen earth.

Nothing remained of the village except in his memories; no life, no one laughing. They would cry if they had escaped the inferno, but he had been too good for that.

Burned down. Burned out. Burned to death. With a sharp thump, he crushed the dying embers of the cigarette with a vicious stamp of his heel.

It was a good day. Yes, it was a very good day.