In the midst of a violent stormy night, a mighty lightning bolt hit the ancient oak tree where Glob, Make, Mous, Byz and Neo lived, immediately followed by an ear-splitting clap of thunder, throwing them into sheer panic. They were forced to flee in the driving torrential rain of the storm, all heading for the relative safety of Miranda’s stable.

“Oh here me dark spirits; I call on thee in this my time of revenge to strike down mine enemies. Spirits deliver upon them all evil devices. Make their worthless lives a misery I command thee,” her voice shrilled, almost drowned out by the continuous lightning strikes and claps of thunder. 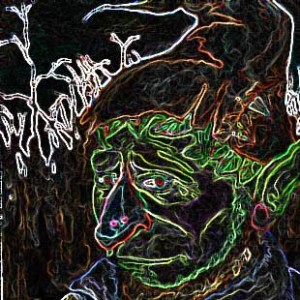 By the flashes of the lightning bolts, her cruel face, disfigured by the festering sore on her forehead, twisted into a grimace of pure hatred. She hobbled between her workbench and cauldron despite the great pain of her grossly bent back and deformed legs, adding ingredients as she increased the power of her spell.

No one had noticed she had taken up residence in a shallow cave in the thickly wooded slopes east of the village, accompanied by her familiar, two days earlier.

The effects of her spell immediately induced a host of crippling maladies in the village. Boils, festering sores, vomiting, diarrhoea and chronic physical pain violently struck its residents.

From inside Miranda’s stable, the now thoroughly soaked goblins could hear the groans and cries of the villagers in the brief lull between lightning bolts and claps of thunder, not yet realising the evil that had struck their humin friends.

The next morning, the storm had finally abated and Byz had trapped himself a new pet in the witch-cage. His pet magpie Grouzle had choked to death a couple of days earlier after trying to swallow Byz’ gold ring.

“Gots me a new pretty birdy – look!” he said as he proudly showed his new pet while his familiar simpleton’s grin broke out, showing his sheer delight from where he sat tethered to one of Miranda’s back legs.

Glob, along with his brothers, stared for a long time with a mixture of deep suspicion, fear and curiosity at Byz’ new pet. A one-eyed raven with a deformed beak peered suspiciously back at them through the bars of the witch-cage.

“Arrk, me mithstreth callth me Bejuth,” the raven lisped in reply, unable to tell a lie as the strong magic of the witch-cage worked.

Whoth – sorrys, begs pardons bird, I means whose yer mistress thens?” Glob enquired as he quickly corrected himself, not wishing to upset the old raven by copying its speech impediment.

Careful to interpret the answers correctly, he determined its name was in fact Bejuss and its mistress’ name was Cazophen.

Through careful questioning, Bejuss revealed she had returned a few days ago after ten long summers far away to the south, learning the black arts from the wizard Crellen who had found her near death and nursed her back to health.

Bejuss explained how Mica’s fellow villagers had accused her of being a witch, while she was not, all those summers ago, after strange and frightening things occurred within the confines of the village.

At the command of the village shaman they branded her with a burning piece of wood, leaving a hideous scar on her forehead that never healed, proof to all the villagers that their suspicions about her were true after all.

A few days after the ritual branding, the men of the humin village took her from the cage she had been put in and threw her off a cliff at the far end of the valley, the reason for her bent back and hobbling gate, believing they had killed her.

But now she had returned with revenge filling her black soul.

Old Bejuss was so frightened by her and the vicious storm she had conjured to hide her wicked spell that he had seized upon the opportunity, taking flight, seeking shelter and safety in Miranda’s stable during the night.

Glob signalled to his brothers to follow him outside into the sunshine.

“Brothers, we needs to finds us some help n quick sharp like,” the old goblin announced as a look of deep concern for their friend Mica and the villagers, mixed with fear of what the witch might do next, rapidly spread across his leathery face.

Neo quickly explained to his dear friend Miranda what was needed and soon the pair disappeared east through theforest at a fast trot.

Glob took off at a steady loping pace carrying his magical staff with its emerald tip to summon the goblin friendly Wyvern.

By nightfall Neo and Miranda had returned with the white witch Brilith, who along with the rest, sat in a tight circle hidden from view beneath Yathle’s great spiked wings in a council of war.

The black slit pupils of Yathle’s golden eyes expanded as the evening light faded. She looked at each and every one of the small band in turn. Her great armoured head, similar in shape to her distant dragon cousins, twisted and inclined slightly as she carefully studied her companions. Her snakelike tail with its vicious barbs swept slowly from side to side tearing up the grass and scrub behind her.

The metallic coloured scales on her chest barely flexed as she breathed. Her thick and powerful legs with their two toed feet, each armed with razor sharp claws, bent at the knee allowing her to sit on the ground. She had willingly come before when Glob had summoned her to do battle with the Griffin. Now she was ready again to serve her goblin friends in their hour of need in any way she could.

“Whatz Pipz?” Mous enquired, not able to get to grips with the raven’s lisping.

“Brilith have yer any suggestions like?” Glob asked of the plump, kind hearted white witch.

“I have a suggestion my dear,” the Wyvern said as she looked intently at the old goblin with her mesmerising golden eyes. “My nose will soon smell Cazophen out up there in the sky. But we need to draw her out from her hiding place first. Who among you can play the pipes?” she asked as a tiny puff of smoke escaped from her nostrils.

“I’s can. I’s knows how,” Byz replied, much to everyone’s surprise.

From beneath his jerkin, he produced a new set of reed pipes and began quietly playing a hauntingly beautiful tune. Since he had been forcibly confined by being tethered to one or other of his brothers, Byz had found a talent he never knew he had.

“I can conjure a protection spell for the whole humin village in the meantime. At least that way the humins will not be attacked again,” Brilith said as she moved a little distance away to cast the spell.

And so, slowly but surely a plan began to be formulated.

Byz with his pipes would be tethered to an oak sapling in the open grassland beyond the village, where on a prearranged signal he would begin to play. Meanwhile Brilith would stand at the centre of the village square, ready to counter any spells that Cazophen may cast. Glob, Neo, Make and Mous would search out the cave guided by Bejuss, who solemnly promised not to fly away.

As the first rays of the dawn slowly filled the sky Cazophen was busy searching for her familiar.

“Bejuss, where are thee? I need ye eye to search the village and report back to me, blast ye! Bejuss, Bejuss, blast ye bird where are…”

She suddenly stopped her search as the most beautiful sound she had ever heard drifted up to her on the morning air.

Byz’s hauntingly beautiful melody completely mesmerized her. A smile broke free from her hideously disfigured face. Cazophen turned her head left and right trying to determine where the music was coming from.

Yathle flew south away from the valley before climbing high into the sky, then turned north and slowly circled overhead ready to strike.

Brilith readied herself for a battle with Cazophen’s dark magic in the village square.

Meantime Glob with Bejuss guiding them from his perch on the goblin’s shoulder, followed by Neo, Make and Mous, steadily climbed through the thickly wooded slopes of the valley towards Cazophen’s cave.

Cazophen stepped out from the shadows of her cave and hobbled trancelike down the wooded slope, following the music.

Glob and his raiding party stopped briefly outside Cazophen’s cave. Bejuss flew ahead and carefully peered inside before returning, happy that the cave was empty.

Between them the raiding party destroyed everything within the cave’s confines before rapidly retreating back the way they had come.

Cazophen hobbled her way out from beneath the tree line and moved towards where Byz sat tethered, happily playing his pipes, oblivious to the danger that steadily approached him.

Yathle’s keen eyesight focused on the black witch below as she began a silent but swift power dive.

Brilith stepped forward, wand in hand ready to parry any attack from Cazophen.

Glob, Bejuss, Neo, Make and Mous watched from the confines of Miranda’s stable as the battle slowly unfolded before their eyes.

The spell of Byz’s haunting melody was broken when the ground around Cazophen suddenly erupted in a wall of flame as Yathle delivered a fire bolt from her flared nostrils.

At the same moment, Brilith sent a powerful wind towards Cazophen that rapidly turned into a twisting vortex, toppling the black witch and lifting her bodily into the air.

Yathle meantime, twisted at the last possible moment from her headlong flight towards the ground and seized Cazophen in her cruel claws before finally biting the witch’s head off.

With the death of Cazophen, the power of her revenge spell was broken and soon Mica and all of the humins recovered.

None of the plucky band who had saved the day told the humins anything of the whole affair or of Cazophen. Better that they simply thought they had been struck down with terrible ills.

Bejuss now free once more, chose to stay with his friends till the end of his days, while Brilith returned to her home in the east unseen by the humins and Yathle to her home beyond the world.

Given their fear of magic, there are things in this world that humins should never ever know about…

Where is Your God?