By Jack Eason Last updated Nov 25, 2021
1
Share
Sparkle lived in a pile of leaves high up inside an old hollow tree in a forest not far from here.
Once she had warmed up, she was a very busy little soul. But when it was cold, or when it rained or snowed, she simply curled up in a ball with her beautiful golden feathery tail wrapped about her with just her tiny nose poking out.
The winter had been a particularly harsh and cold one. Traces of snow from the last heavy fall still clung to the old tree’s foliage above Sparkle’s nest as it gradually melted in the weak warmth of the early spring sunshine. All throughout the land new signs of life stirred now that the weather was changing for the better. 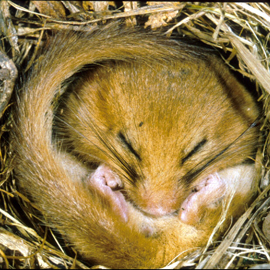 Sparkle’s nose twitched. A great sneeze escaped as she involuntarily rid herself of a tiny feather that had found a temporary home in one of her nostrils at sometime during the winter while she slept.
She opened one eye and peered out from behind the protection of her tail. All around her she could hear her neighbours stirring from their winter slumber as the sun slowly warmed the world. Sparkle yawned, stretched and open her other eye. It was time once more for life to continue in its age old way.
She rolled over and stood for a few moments as her heart pumped furiously, rapidly driving away the torpor she had been in throughout the long dark months of winter. Sparkle busied herself tidying her nest, grooming her fur and magnificent tail before she plucked up the courage to hunt for food.
It was still too early for her to collect her favourite berries. But she knew her secret larder at the foot of the tree beneath one of its giant roots would be full of the nuts and berries she had gathered last autumn; always providing of course that the squirrels hadn’t found it and emptied it.
Sparkle timidly peered out at the world.
Beyond the safety of her nest she had many enemies who like her were ravenously hungry and would not think twice about catching her for their supper. Fortunately for her, the old tree she lived in already had its new covering of leaves, meaning she could hide from the vigilant eyes of her woodland nemesis, the grey owl that lived close by. If danger presented itself she had an alternative route down to the ground inside the trunk.
Many times during her short lifetime Sparkle had nearly been caught by the wily owl. She had often escaped at the last possible second by diving beneath a leaf, or by clinging to the underside of the branch she was on, before dropping to the leaf litter on the forest floor below where she could quickly disappear from view.
As the sun climbed higher in the sky she decided to take a chance and step outside. She sat in the entrance to her nest for a short time checking for signs of danger before scurrying down the tree’s great trunk to the ground below.
Sparkle uncovered the entrance to her larder and peered nervously inside. Last year, she had nearly been caught by an Adder who had made her larder its new home. But thankfully all was clear as she entered. She ate her fill before beginning her long climb back to her nest, this time in the relative safety of the old tree’s hollow interior.
There was so much to do in the coming weeks. She hoped that the male she tolerated would be back. By now Sparkle was two years old, a great age for a Dormouse. She needed to have a brood of her own before the year turned once again to winter.
The sun disappeared below the horizon bringing the day to a close. Sparkle busied herself before bedtime rearranging the new supply of leaves on top of the old in her nest. A noise outside her home made her extremely nervous.
A beam of sunlight signaled dawn as it tracked slowly across the hollow in the tree’s trunk revealing all that was left of Sparkle. Her magnificent golden feathery tail lay discarded in the now empty nest.
A young Pine Martin had found its evening meal…
Continue Reading
1
Share FacebookPinterestTwitterLinkedinReddItTumblrWhatsAppScoop ItMediumEmail