Tedz E. Bear And The Wizzi

A very long time ago there was a teddy bear

that lived happily with his young friend James aged four and a half. His name was Tedz E Bear; he always insisted on using his full name when in the presence of other teddy bears you understand because he was a very good little bear with very good manners. 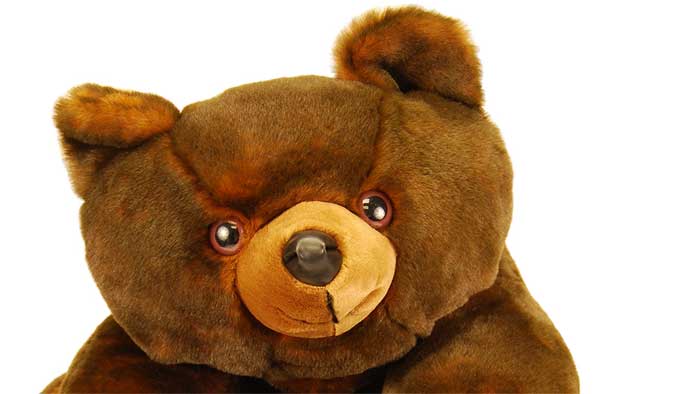 Of course, Tedz never ever spoke to his friend James because it was not allowed according to the rules of the teddy bear code. But James always believed he could hear his friend Tedz talking to him in his sleep at night.

James’ older brothers and sisters teddybears all lived in the dark attic above James’ bedroom, forgotten and alone

It wasn’t that they didn’t love their teddy bears anymore. But James’ mummy and daddy decided that now it was time for them to stop playing with their teddy’s and do their lessons at the school in the village instead.

One day the time came when poor Tedz, was taken by James’ daddy and put into a large cardboard box in the attic.

Oh dear, what was he to do? Tedz was all alone and in the dark. His paws weren’t strong enough to get the lid off the big cardboard box no matter how hard he tried. He even tried to sit up but only banged his head on the lid. Then someone came to help.

“Hello in there,” said a gruff voice, “Need any help?”

Before he knew it, he felt himself being lifted out of the big box.

“Thank you ever so much,” Tedz said, trying to get rid of a big cobweb that was stuck in his fur.

“My name is Tedz E Bear,” Tedz declared. “Who are you please?” he asked politely. For you see it was very dark in the attic and Tedz could not see anything at all.

“My name is Bristle. Wait a moment young Tedz,” said the voice, “I’ll just open the curtain, there that’s better now we can see.”

Tedz rubbed the cobwebs from his eyes. There before him was a great big teddy bear, much bigger than he was. Bristle patted Tedz and said, “Come along and meet the rest of us.”

At the other end of the attic was a big dolls house and in it lived all of James’ brother and sister’s teddy bears.

“Everyone I would like you to meet James’ teddy bear Tedz E Bear,” Bristle announced. Then he introduced everyone to Tedz.

There was Patches who was covered in tiny patches that James’ mummy had sowed on to stop his stuffing falling out. Dub, short for Rub a Dub Dub, a very lumpy bear that James’ sister had tried to wash once in James’ mummy’s washing machine. Poor Dub lost all his shape when he eventually dried out. Then there was very pretty girl bear with a pink bow around her neck called Tuppence, who Tedz liked very much. Finally, there was a very little bear, much smaller than Tedz named Scarf who had a great big scarf around his neck to keep him warm. For you see poor Scarf was very, very old and had lost all of his fur.

“I think I shall be very happy here,” Tedz said, “But I shall miss my friend James very much indeed.

One day Tedz and Tuppence decided to explore the attic together. Because they were very little and not very good at walking, it took them a long time to reach the other end of the attic.

“Always remember Tedz we must not let the Wizzi catch us,” Tuppence said in a hushed and frightened teddy bear voice.

“A Wizzi is a monster that lives in the dark and likes to hurt teddy bears like us Tedz,” she said dragging poor Tedz quickly back towards the doll’s house and the rest of their friends as fast as she could.

“Only Bristle has ever seen one and he was scared to even though he is very big,” she said as they finally sat down inside the doll’s house, safe and sound once more.

Tedz just had to know what a Wizzi looked like so he pushed his stuffing into place, brushed his fur and went to see Bristle.

“Excuse me please Bristle if you please, but I was wondering if you could please tell me what a Wizzi looks like please,” Tedz asked very politely. Tedz liked to always say please and thank you whenever he could.

Bristle looked at young Tedz for a little while and then he said in his best gruff teddy bear voice,

“A monster Tedz, a monster…”

“Is there one living here in the attic please Bristle?” Tedz asked very politely.

“I fear so young Tedz, I fear so,” said Bristle.

“Where does it live if you please Bristle?” asked Tedz.

“It lives in the big dark shadows behind the boxes just over there,” said Bristle, pointing to a pile of old boxes in the corner of the attic.

Tedz made up his mind he was going to hunt the dreadful Wizzi and get rid of it for his friends. So, ever so carefully Tedz crept over to the boxes and peered around the corner.

It was very dusty, dirty and dark in the corner where the boxes were. Where could the Wizzi be Tedz wondered? He searched and he searched but he could not find the Wizzi anywhere.

“Come out if you please mister Wizzi sir?” Tedz said as loud and as bravely as his teddy bear voice would allow. But there was no answer at all – nothing.

It was getting very dark in the attic so poor Tedz decided it was time to go back home to the doll’s house. The Wizzi was nowhere to be found.

“Aaah look a Wizzi!” shrieked Patches as he ran inside to hide. All the bears hugged each other in fear. Where was poor Tedz? The Wizzi was on the prowl!

“Can someone please get all this fluff and cobwebs off of my fur if you please?” asked the Wizzi very politely.

All the teddy bears laughed and laughed. It wasn’t a Wizzi at all. It was poor Tedz. He was covered from head to foot in dust, fluff, and cobwebs. For you see there is no such thing as a Wizzi. It’s simply something that all teddy bears believe in but doesn’t really exist at all.