Tonight I continue with the story of Gallows Hill House. I have told you how the haunting began and as we progress, I’ll recount the interviews I had with Katie, the present occupier.

After Thomas’s death, the house was sold off and the shares divided between his few remaining relations. It passed from one owner to the other over the next few hundred years, though none stayed for very long. Its present owner refused to be interviewed, but I know from asking about in the locality, that he stayed in the house only six months and left in the dead of night. I’ve seen the little cottage he now lives in and it’s obvious that something terrible must have driven him from his former residence.

He has found it impossible to sell the place, as rumours travel fast and this is why he rents it out as a holiday let. Many of the neighbours I met grew wary when I mentioned the place and some refused to talk about it at all, pretending to know nothing about the haunting. What I did learn was that once a month, just before dawn, the rumbling of the prison cart is heard making its way to the gallows. The crying of the condemned echoes in the still air and the beat of a phantom drum counts down their last few moments on this earth. One woman swore to me that she would never pass the spot at night, but chose to drive five miles out of her way in order to avoid it. It’s understandable, having been there I feel the same. There’s a chill, even in the sunlight and a lonesome hush that makes one stop and look around, as though someone unseen keeps pace with your every footstep. 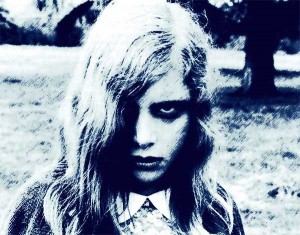 I met Katie at her neighbour’s house. She refuses to go back inside her own home and though she offered me the key, some of her fear rubbed off on me and I chose not to. She went on to say how anxious she’d been during the flight over here.

“I put it down to my ill health,” she explained. “I had a miscarriage a few months ago and my nerves are very bad.”

It’s obvious from the way she speaks, that her husband blames her complaints of the strange happenings on nerves, but it’s heart-warming to see her neighbour reach out and lay a worn hand on top of Katie’s smooth one. This old woman knows that the stories are not down to imagination and it’s a comfort to Katie to have such support. The strange events started from the moment they moved in, she goes on to say. At first, it was rapping inside the walls that her husband put down to mice or birds in the attic. He was gone for most of the day, as he travels round the countryside looks for views to paint and she found the time weighed heavy on her. When she complained about this he came home with a little collie pup, she calls Betsy and for a while she hoped things would improve, but it soon became clear that the dog was as sensitive to her surroundings as her owner.

Betsy slept in a basket in the kitchen and one the third night after her arrival, Katie woke to hear her whining. She knew it wasn’t easy for the little dog to be apart from her family, so she tip-toed down to comfort her, but it was not the separation that bother Betsy. Katie found her huddled in the hallway outside the door of the room rumoured to be where the prisoners were held. She said the dog with shivering and backing away and when she scooped her up, in her terror, Betsy tried to bite her. The dog tried to bury itself inside Katie’s dressing gown and as she fussed and petted the terrified creature, she became aware of sounds from inside the room. Pressing her ear to the door, she could make out the sound of someone softly crying and the rattle of chains. Now her terror matched that of the dog’s, but she put her hand on the door knob and was about to open it, when Betsy squirmed out of her arms and fell to the floor. Her worry about the dog overcame her fright and once she’d examined it for any sign of injury, she hurried back up to bed, taking the dog with her. In the morning, when Paul had left for the day, she found the courage to go inside the room and found nothing out of the ordinary.

Sometimes even during the day, there is a resounding crash from overhead, as though one of the huge wardrobes has fallen over, but when she checks there’s nothing out of place. She showed me a scar that runs a good two inches down the side of her thumb and says she was in bed one night and in her sleep put her hand under her pillow. She woke with a scream to find blood running between her fingers. The cause of the wound was an old cut-throat razor that lay open on the sheet beneath her head. Paul accused her of finding it somewhere and forgetting it was there, but even on the trip to the hospital, when she tried to tell him she knew nothing about it, he wouldn’t listen. The strange thing about it, other than the fact it shouldn’t have been there in the first place, was though the razor itself was rusted, the edge of the blade was shiny and sharp. Paul never hears anything that he can’t explain away and she feels that the ghost is trying to drive her mad. The pills her doctor gave her do little to help. The next incident happened one evening when she took the dog for a walk.

There’s no where to go other than out onto the winding road and past the gallows hill and she saw in the distance a man dressed in black standing at the foot of the mound. It was bright and it easy to see him. As they drew closer, within a few yards, she saw his face was ashen, though his eyes seemed to glisten with a strange fire. His face was pock marked and he seemed hunched up beneath his heavy coat. She thought about turning back, but the decision was taken out of her hands when he disappeared right in front of her. There was nowhere for him to hide and she walked on puzzled and thinking there had to be some explanation, but the dog stopped and refused to go any further. Katie felt the hairs on her neck stand and she walked back to the house all the time looking over her shoulder.

To her torment, Paul passed the happening off as a trick of the light. Then last week he left on business and she was alone. On the first night, she took a sleeping pill and with the dog lying beside her managed to drift off. She was woken some time later by the sound of footsteps walking up and down on the landing. It sounded like heavy boots on wood, but the floor is carpeted! She lay there hardly daring to breathe and saw that Betsy had heard the same thing and was sitting up watching the door. Another sound began, the sound of a walking stick tapping on the stone floor below. She listened in terror as the tap, tap, tapping started on the stairs. Sobbing with fright, she held the little dog close as the sound approached.

The bedroom door opened silently, as though someone was sneaking in, but when it was opened fully, there was no one there and that was when she lost it. Jumping out of bed, she ran down the stairs and out into the dark, still clutching the dog and dressed only in her nightdress. The stones on the drive cut her bare feet, but she didn’t stop running until she reached the house we were now sitting in. Now it seems her husband is talking about taking the house for a further six months. She asked if I had heard the story about the young woman who is seen during the winter months, leading the small child along the drive to the house. I told her I had heard about it and she looked at me with pain-filled eyes and asked.

“How will I cope with such a thing? After losing my own child, I can’t bear to even think about what they suffered. If the story is true, how can I bear such a sight?”

I couldn’t answer, because I don’t know; do you?

Sleep tight and remember, there’ll be another story waiting for you next Friday night.