Book I – Severed Threads:
Believing herself responsible for her father’s fatal diving accident, Rachel Lyons has withdrawn from the world and assumed a safe position at a foundation office. When called upon by a museum director to assist her former love interest with the recovery of a cursed relic from a sunken Chinese merchant ship, she has no intention of cooperating – until her brother is kidnapped by a drug-dealing gangster. In order to save him and gain control over her own life, Rachel must not only overcome her greatest fears, but also relive the circumstances that lead to her father’s death.

Excerpt:
“Rachel, I’m not going to lie to you. I heard you’d given up diving, that you were working for the Warren Nash Foundation. But I honestly had no idea you’d be here.”

“And as for your dad,” he continued, “not a day goes by that I don’t feel responsible for what happened. Sam was a good man. Like a father to me.”

She bristled. Her gaze burned with emotion. “Oh, really? Then why didn’t you have the decency to show up at his funeral?”

Chase’s gaze slid from her face. His brows met when he looked up again. “Look, I really wanted to come. It’s just that after the investigation and everything – “ 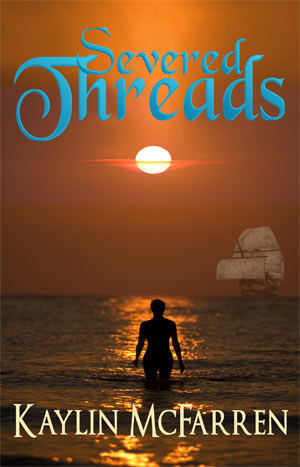 Her anger ripened. “Yea, right.” His scrawled note had left her brooding for weeks. Something urgent came up…have to leave town. After professing her love, he turned out to be the scoundrel her brother Devon had painted him out to be. Her teeth clenched at the memory. “You were a complete asshole. Now, get out of my way.”

Using both hands, she shoved hard against his taut chest, but he rocked right back in place. He grabbed hold of her wrists and pulled her in close. “You have every right to be angry,” he said quietly. “But there was a good reason why I stayed away. Why I never called you.”

An involuntary shiver ran up her spine. She averted her gaze toward the marina, wishing the drifting fog could shield her from his soul-searching gaze. She didn’t want him to see how broken she’d become. Or how much, deep inside, she had never stopped yearning for his touch.

“It had nothing to do with you and me,” he insisted.

She stepped back, breaking his grip. “It still doesn’t.” Venom dripped from her words.

Chase nodded slowly. “Maybe not. But right now, I need this job. More than you know.” His blue eyes intensified. “What will it take for us to get past everything? An apology? You have it. My promise to stay clear of you? Done.”

His words reminded her how easy it was for him to dismiss her. She’d been such a fool in allowing his charm to blind her. He obviously cared about no one but himself. And deep down inside, no matter how hard she had tried to dismiss it, they both shared the blame in her father’s death. Nothing would change that.

She drew in a deep breath. “There is one thing that will make me feel better.”

His face relaxed. “You name it. Anything you want.”

She pulled back her arm and swung with all her might. Her palm connected with his cheek so hard it stung her hand to the bone.

“Damn!” He grabbed his face, wincing from the blow.

She pressed her palms together, nursing her own pain, and addressed him again. “I’ve wanted to do that for a long time. If you think you can just show up and expect me to – “

Before she could finish, he pulled her into his arms. His lips found hers, launching a current through her veins. The parking lot was spinning out of control and he was the driving force. Her legs quivered, leaving her unsteady on her feet. When he finally lifted his head, she leaned against him, breathless, betrayed by her body’s weakened state.

His warm breath brushed her cheek, lifting tiny hairs on her skin. “And I’ve wanted to do that,” he whispered raggedly, “from the first moment I saw you in Doc’s office.”

Of course. His agenda. Her senses sobered. She distanced herself and firmed her tone. “Nice try. But you’re still not getting a dime from me.”

Chase bent his head and seemed to be strategizing his next move. When he looked up, his crystal eyes chipped away at her soul. “For what it’s worth, Rachel, I really am sorry…for everything. Should’ve said that a long time ago.” He rubbed the back of his neck. An emotion resembling disappointment crossed his face. “Believe me, I would’ve stuck around if I could have.”

She was surprised by his show of sincerity. But nothing he could say would lessen the pain she still felt from him abandoning her when she needed him most.

She jutted out her chin. “It was just a summer fling. A mistake from beginning to end. We should have ended it like adults, is all.”

Her final words hung in the air. A nerve jumped at his temple. “I didn’t know you felt that way,” he said.

Chase’s kiss still simmered on her lips. His nearness threatened her reserve. It wasn’t in her to be cruel, but she’d been hurt far too long to back down now.

“So…now you do.” The lie tasted bitter in her mouth.

Chase’s eyes darkened. He gave a rueful nod. “Good thing we got that cleared up. Wouldn’t want to make any more mistakes.”

As he strutted toward his truck, anger gathered in Rachel’s chest. Anger over his words, his deeds, his presumptuous kiss. Over the fact that for a split second, he had made her feel like the bad guy. Her mind threw daggers at his back. “Damn you, Chase Cohen.”

She slid inside her silver Kia and slammed the car door grateful the museum’s security guard was now watching from a distance. If he hadn’t been, she might have acted on a homicidal impulse and run Chase over, the manipulating jerk.

In fact, it made her feel better just to imagine it.

Kaylin McFarren is a rare bird indeed. Not a migratory sort, she prefers to hug the West Coast and keep family within visiting range. Although she has virtually been around the world, she was born in California, relocated with her family to Washington, and nested with her husband in Oregon. In addition to playing an active role in his business endeavors, she has been involved in all aspects of their three daughters' lives - taxi duties, cheerleading coaching, script rehearsals, and relationship counseling, to name but a few. Now she enjoys spending undisciplined time with her two young grandsons and hopes to have many more.

Although Kaylin wasn't born with a pen in hand like so many of her talented fellow authors, she has been actively involved in both business and personal writing projects for many years. As the director of a fine art gallery, she assisted in furthering the careers of numerous visual artists who under her guidance gained recognition through promotional opportunities and in national publications. Eager to spread her own creative wings, she has since steered her energy toward writing novels. As a result, she has earned more than a dozen literary awards and was a 2008 finalist in the prestigious RWA® Golden Heart contest.

Kaylin is a member of RWA, Rose City Romance Writers, and Willamette Writers. She received her AA in Literature at Highline Community College, which originally sparked her passion for writing. In her free time, she also enjoys giving back to the community through participation and support of various charitable and educational organizations in the Pacific Northwest.