The squeaking bicycle wheels turned with mechanical persistence, as Jon pumped triumphantly across the neighborhood asphalt and rounded the bend towards home.

It felt like the sky swooped down and pulled his excitement into the air. He was flying down the flat, familiar road of his substandard, military housing project.

It was Jon’s second week on a two-wheeler and his sixth year of life. He never, ever believed he would be able to ride his bike without the help of his loud, grating training wheels. “Baby wheels!” The older kids would tease.

As the cracked, weed-filled driveway to Jon’s yellow-walled, dilapidated garage came into sight, a flurry of devilishness was unleashed. 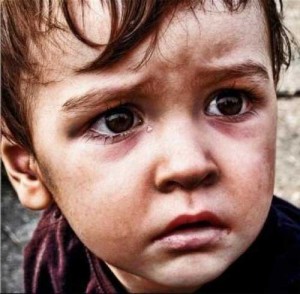 Jon glanced to his left and saw fifth graders Biff, Manny and Dennis rising behind the barren bushes of late winter, arms flexed like baseball pitchers in their windup with fistfuls of delinquent angst headed his way.

Fear jumped through his arteries, as his legs strained to provide escape. Rocks and gravel pummeled his head, neck and shoulders. The bike seemed to melt away, as the gutter made friends with his face. Anxious, laughing voices hovered nearby. “Let’s beat it before he goes crying to his mommy.” They mocked.

He looked up through a fuzzy blur. Something wet and warm was dripping down his forehead and into his eyes. He felt for his glasses but they were gone. He looked at his hand and saw red streaks on his fingers and palm. Pain made a dramatic, sharp entrance, as tears merged with the stream of bloody discharge cascading over the side of his nose and cheek like a miniature waterfall. Before he could cover his mouth, a cry of nature erupted. “Mama!” A long, sick silence followed; then he heard it again, “Mama!” and felt his lips close around the last vowel.

Without his thick spectacles, everything looked lopsided and out of control. He stood with a groan and fifty pounds of embarrassment clinging to his back. Without knowing his camouflage pants were ripped to shreds and his bike a modernist rendition of mangled metal, he carried his torn body up the driveway, through the garage and into the kitchen to find the comfort of his mother’s arms. “Mama! Mama!” he cried, moving urgently from room to room. Leaking blood along the hall carpet he finally smelled his mother’s presence and opened her door.

Clarisa, Jon’s mother, was lying quietly with her eyes shut softly when Jon entered. Her forehead wrinkled with pain at his sudden intrusion.

“What?” she said, without moving or looking his way. “I’ve got one of those awful headaches again.”

“Mama!” Jon sobbed. He walked clumsily towards the bed.

As Jon froze in mid-step, Clarisa began to rise. Her head seemed to contain a ton of throbbing iron. She inched, like an antique tray of china, to the bathroom. Jon stood shaking; restraining his primordial need to throw his arms around his mother’s waist, bury his head in her soft belly and wail.

She returned with a rolled up green towel and pressed it gently above his left eyebrow to stop the bleeding; making sure to keep her freshly washed red and blue blouse from her son’s crew-cut head of filthy, oozing fluids.

Clarisa was awash with agony. Jon’s bloodied entrance had cracked the temporary sea wall she’d erected in her quiet bedroom harbor, to keep the stormy waters of her aching head at bay. She called her neighbor, Grace, and asked if she could take Jon to the emergency room.

Grace, a stout, big-shouldered woman in jeans, was there in minutes, her one-year-old, Mary, clamped on her hip like a spider monkey. After her initial shock at seeing the dazed and dripping boy, she donned her best Florence Nightingale tone of voice and whisked Jon away with repeated self-assurances. “Everything will be OK Jon. Don’t worry.” Jon laid in the back seat of her car and held the towel tightly to his forehead. “It’s nothing,” Grace continued. “We’ll have you fixed up in no time.”

Once Grace had left with Jon, Clarisa sank back to bed with guilt and blame bombarding her already shattered head. “What kind of a mother am I?” she thought. He looked so scared.” She moaned in pain and placed her hands on her temples. There was nothing she could do. Her migraines crept from the back of her skull, like a creeping vine, thick with thorns, once or twice a week and literally dropped her to her knees. They had increased in frequency since Jon’s father, Alex, left for another six-month naval tour in the Indian Ocean.

She never mentioned her ailment in her overseas letters. They were always short and sweet, filled with everyday occurrences and concerns. “We’re fine. Jon is riding his bike whenever the weather permits. He’s getting much better. It won’t be long until we take off the training wheels. He’s doing pretty good in school. They learned the cutest song last week. I’ll try to remember to have him sing it for you when you get home. We both miss you tremendously. Take care sweetheart. Love Clarisa.”

Clarisa’s potent fear of what her “migraines” may reveal, were batted away like an annoying mosquito. Her father had died, at the age of fifty, from a cerebral aneurysm. Her mother had soon followed suit with a number of massive strokes. She had only been nineteen when her father made his quick exit and a tender twenty-three when her mother was ungracefully removed from her life. She viewed doctors as messengers of death and hospitals as corridors of contaminated grief.

The nurse, Bea, washed Jon’s forehead with yellowish-brown betadine that ran behind his ear. Bea’s brown face was surrounded by straight, thick black hair. The rest of her body was covered in white. She kept smiling and repeating, “That’s a good boy.” Her soothing voice put him into a matriarchal trance, as name-calling, rocks and falling took an afternoon nap.

Grace stood close by, rocking Mary side to side, like mothers’ of young children do. She was trying to put on a good face and comfort Jon, but he could sense her aversion to looking at his wound.

A tall mustached man, in a hospital coat, suddenly loomed over Jon.

“This is Doctor Patrick,” voiced the nurse, in a hasty introduction.

“What have we here?” he questioned, without expecting anyone to answer. He took the pad off of Jon’s eyebrow.

The doctor ignored his outburst and stated matter-of-factly, “Pretty good one there buddy.” Turning towards the nurse he said, “I’ll need a butterfly suture set.” The nurse already had it ready and placed it in his hand.

Jon eyed the doctor with the hair on his lip, as he opened the suture kit and seeming to speak to the plastic tray said, “Son, I’m going to give you a little poke. It will sting.” Nurse Bea handed Doctor Patrick a small syringe. “Then I’ll stitch you up so good you’ll never know what happened.”

Doctor Patrick moved closer. Jon could feel his height. He looked at the doctor’s black belt and buckle, when his white coat fell open, then felt a sharp sting. He started to cry.

“The next part won’t hurt,” the physician’s monologue continued.

“It’ll just feel like someone tugging on your eyebrow a bit.”

“Son,” Jon repeated to himself. It sounded like his father’s voice. He knew his dad would want him to “be tough” so he bit his lip, counted backwards and closed his eyes. He longed for his mother’s arms and cried out “Mama!”

“All done,” chuckled the tall, black-belted, mustached man. “You can open your eyes now.” As he put the tweezers back in the tray, Dr. Patrick turned to Grace, who had just opened her eyes and said, “You have a brave little guy here.” Jon wiped away the tears with his dirty sleeve.

Before Grace or Jon could say a word, the self-absorbed doctor had gone to the next bed and disappeared behind a sliding beige curtain. Bea looked at Grace. “He’ll need to come back in a few weeks to get those removed.” She gestured towards Jon’s forehead and smiled her bewitching smile.

“I’ll tell his mother,” Grace replied, then helped Jon off the gurney and held his trembling hand out to the car.

When Jon and his mother made their return visit to the hospital, Jon let slip a comment about his mother’s headaches. The doctor, a young, auburn-haired woman, named Sally Shapiro, quickly questioned Clarisa. “When did she first have these headaches? What was their frequency and how long did they last? What was the pain like? Were there any stressful events in her life? Did anyone in her family history have similar ailments?” The last question unloaded the cart.

To her surprise, Clarisa found the attention comforting and was relieved to finally reveal her private world of apprehension and fear. She made an appointment with Dr. Choate for tests the following week. To her delighted and infinite surprise, the tests discovered nothing other than high blood pressure, which was successfully treated with medication and a change in diet.

Jon’s feet pushed hard on the rubber pedals of his new used bike. He broke free down the straightaway and didn’t let up rounding the corner towards home. His mother was in the front yard with Grace and little Mary playing in the flowerbed. Clarisa was planting spring bulbs and chatting away when she heard a holler.

“Hey, Mom! Look!” Jon yelled with delight. He felt like the sky had lifted him from gravity’s grip and pulled him, flying, up the driveway. He skidded to a stop and stood beaming like sunlight. His mother clapped her dirt-covered hands and ran to his side. She gave him a long hug, pulling his head to her tummy and exclaimed, “That was fantastic! You’ve gotten so good! Your father will be very proud.”

Unfastening the strap to his helmet, Jon unconsciously felt above his eyebrow, adjusted his wire-rimmed glasses and basked in his mother’s presence and praise.