Here follows a tale taken from the Chronicles of Evyntyde, recounting a time in the dim past when Cimiar the Alchemist was but a young apprentice.

Each footstep was carefully placed as the cave floor was eternally damp and the slimy rocks were polished to the consistency of fine glass by thousands of years of water running over them. One slip and he would tumble hundreds of feet to a shattering end. Cimiar grimaced, imagining his demise in a fall—the underground stream would eventually carry his broken, rotting corpse to the Eralyn Plains.

The young alchemist had a blazing torch in one hand, and had the other free. He more often than not needed it to keep balance or hold onto stone formations or stalagmites to keep himself from slipping. He guessed he had descended a half mile beneath the mountain and had no idea how much of his climb was left. The wyrm’s lair is deep indeed.

Cimiar started to wonder why he had chosen such a difficult task, why he was willing to risk his life for a single wyrm’s scale. He then reminded himself that it was worth it: that rendering the scale to powder would give him the final ingredient needed to enchant the blade he had forged. The scale’s sympathy for fire resistance would be used to bestow the same to the wielder of the sword. He smiled at the thought of achieving this magic. His fame would spread throughout Kul-ra, and he would be invited to the Court of the God Emperor Kul himself. After dipping into is fantasy his fears dissipated into the hollow darkness of the colossal cave network and into the sounds of trickling streams that joined the rushing river far below. 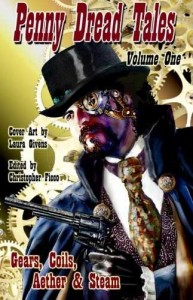 It seemed an eternity, yet eventually the steep descent turned into a gentle grade. The river was near; its cataracts already roared in his ears and fine mist caressed his face. Cimiar took a few more steps and his clothes were saturated.

He raised his sputtering torch and muttered an invocation to the god Aquyla in the old Kulric tongue, and for a few seconds the troubled flame erupted ten feet in height, lighting his surrounds completely. His eyes quickly scanned the area. Yes, the cave is still gigantic in size! A wyrm would have no problems getting down to this level. A wyrm would nest here.

He dared not enhance his torch’s flame again for fear of being noticed by the ancient creature. Assuming the alarm has not already been sounded, he soberly thought. His plan was not to see the wyrm at all. All he wanted was a scale. For hours he searched the rocks and crevices, hoping to spot a scale that was shed or scraped off on the rocks. To no avail. So far.

Cimiar rounded a curve in the cave and encountered a narrow path, lined with stacked boulders on each side. This was the first sign of anything other than natural formations in the cavern network. He wondered what purpose it could serve, having rocks the size of cows stacked up twenty feet on each side of a five foot wide path, and extending for two dozen yards. There was no easy way to bypass them, so it had to be a trap. Crude but…he remembered reading that Wyrms often had magical abilities.

Cimiar closed his eyes, thanking the gods that Olander, the largest of the six moons—and which held sway over the element of earth—was in the ascendant this day. It added considerably to the power of his earth based magic. After a few deep breaths the walls of rocks came into his mind-vision—and they became known to him in every facet—the boulders’ weight, dimensions, structure—down to the finest grain, and also their smallest weaknesses. It was costly, but he opened his eyes, and maintaining his concentration on the walls, he slowly walked down the path.

When he was exactly halfway down the rocky corridor a rumbling emanated from beneath his feet, and then the walls started to collapse in on him. This was expected and now that he fully understood the nature of the rocks, he countered their sympathy to fall—with all his might. The entire length of both walls were leaning over the path, ready to crush the alchemist like an insect under foot. They no longer moved—they were suspended in mid air. Cimiar continued to walk but his pace was agonizingly slow as he had to spend the lion’s share of his concentration on his spell. As he approached the final yards he could sense that his strength was waning and that some other magic was trying to counter his effort. Gods! he thought, this is not going to work! Then an idea entered his head—another way to save his life. He forced his remaining strength to rapidly separate every grain that constituted the boulders; and he pushed.

Instantly, in a mighty cacophony, all the toppling rocks within a three yard radius exploded into fine dust, and Cimiar leapt forward in an attempt to avoid the tons of material. The torch snuffed out as he was engulfed by the waves of sand. Holding his breath for as long as he could, he scrambled in slow motion, trying with what little strength he had left to move toward the edge of his improvised grave. He moved his hands and arms as if he was swimming, furiously trying to edge his body forward. Suddenly, when he thought it would be forever buried, he felt the freshness of the cave air caress his face, and the powdery remains of the boulders run off his body. He climbed to his feet. He was weary but alive. A simple mental gesture set his torch alight again.

“Impressive indeed,” came a hoarse, venerable voice from Cimiar’s right. He turned and saw a man so old it was difficult to grasp he was still alive. The wizened figure’s back was bowed to the point he could barely lift his head to look at Cimiar. He wore grey robes and had nothing on his dirty feet. A gnarled hand firmly grasped a crooked walking stick. “No man has ever succeeded in getting this far. You must be a powerful sorcerer indeed.”

Cimiar dusted himself but kept his eyes firmly focused on the old man. “I’m an alchemist, sir, and traps that are constructed from base elements are a trifling matter to me.” He hoped his lie was convincing and did his best to disguise his exhaustion. “Now tell me, old man, who are you? I expected a famed wyrm to reside deep in this cavern.”

The figure laughed. “You could perhaps call me the Gatekeeper. I am as old as the caves and I am charged to protect those who live here.”

“I am charged to protect those who live here,” the old man repeated.

The Gatekeeper laughed again. “No, no, no. He passed on scores of years ago! I am afraid that I now protect the bats, the crickets, lizards and fishes.” The old man’s face turned quickly solemn.

Cimiar was now concerned that he may have risked his life for nothing. “What do you intend to do now, since I’m still alive?”

“It depends,” the Gatekeeper replied. “What are you planning to do?”

“With no wyrm here, to return to the upper world. All I wanted was a single scale of its hide.”

The old man’s furry eyebrows lifted. “Is that all? A mere scale?”

The Gatekeeper held his hand up, indicating for Cimiar to stay put, and he wandered past a small rocky outcrop and disappeared. Ten minutes later he returned, carrying a shiny red scale, the size of a small shield. “Would this do?”

Cimiar nearly choked. “Why, yes. It’s exactly what I want.”

The Gatekeeper handed the glistening scale to Cimiar. “You must make an oath to me, in exchange for this boon.”

“Never return to this cave. It is a sacred place and it deserves to be undisturbed.”

The old man acknowledged the promise and started to walk away. “Then I bid you farewell, alchemist. We shall not see each other again.”

When the old man disappeared into the damp shadows of the cavern, Cimiar turned to the path he had nearly died in, and to his surprise it was clear and lined with the same stacked boulders. Despite his weariness he chose to climb some of the way before resting, in order to honor the Gatekeeper’s request for privacy.

The return journey was difficult as Cimiar’s magic had taxed him nearly to his limit, and despite the short rest, it would take him days to fully recover. When he finally exited the cave mouth into the freshness of the Western Waymoor Ranges, he was barely able to find a spot to collapse and fall asleep. It was night, and it seemed so easy to close his eyes. He cared little for his safety…

Sunlight had already caressed the mountain tops for an hour when Cimiar awoke. He stretched and scratched his chin, slowly getting up, trying to shed the last vestiges of his sleep. He was lying on a small patch of grass on the side of the cliff face where the cave mouth yawned, and as he stepped forward to gain a better view of the valley below, he tripped into a shallow hole in the ground. He was sure it wasn’t there before.

Cimiar stepped out of the hole and studied it. The shape was familiar and when the truth dawned on him, he fell over laughing. “Old man, or should I say old dragon! You sly devil!”

He had fallen into a fresh wyrm’s footprint.