The Blue Child Series: On the Mountain

On the Mountain: This is a recently completed book best described as fantasy though it contains so much of what I know from living and working in Indian Country.

The main character is Ruby.  She is an eccentric Native American Elder.  She thought she had reached what should be the most peaceful stage of her life. 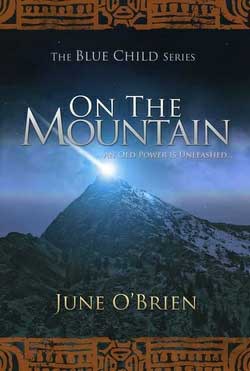 But a call one morning sends her on a journey into the mountains where she is guided to an event that challenges the very essence of who she thought she was and changes the direction of her life.

: Ruby dreams.  The mountain sings to the night sky.  Fog forms, grows thick.  Song and fog wash down the mountainside looking for Ruby.  They coalesce into a woman standing beside her bed; entwined in the song is weeping.

Over the woman’s heart is a sapphire blue light.  It is unclear if the woman and the mountain are the same but it is clear that the woman is sad.  More than sad; she is grieving.

Ruby is cold, digs into the cedar needles beneath, pulls the cedar around her shoulders and drifts back into sleep.   If the woman has something to say, she will return.  And there she is again, still weeping.

The blue sapphire becomes a star.  The woman opens her hands and similar lights fill her palms, but Ruby’s attention is caught by the light over the woman’s heart.  It explodes filling the circle of cedars with blue shards.

June O’Brien lives in the northwestern corner of the United States. A member of the Nansemond Tribe, she is a dream consultant with degrees in psychology and counseling, and has published two books of poetry.
She is from a culture in which seeing spirits, visiting with them, and being summoned by them is not unusual. She knows the spiritual medicine of wild plants, gathers them and makes medicine for the body and for the soul.
When in the forest, or the mountains gathering medicine, she knows that sometimes a spirit comes. It may seem only a sudden shift of the light, a spooky shiver, or a shadow between the trees.
Or, if you are fortunate, you may see a spirit-creature fully revealed. If that happens, it may follow you home, tell you a story. Maybe you will have no peace until you’ve written what it says. Maybe it will change your dreams, send your life in a strange new direction.