This August I will be releasing my second book, a contemporary titled Stranger By Morning. 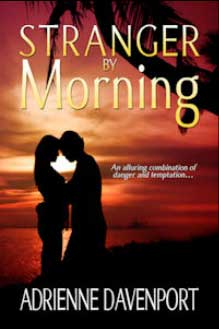 This book, along with my first work will be available at many bookstores, online and off. For those interested, I have posted an excerpt from the upcoming novel. It is listed below:

The night outside the Oberoi Suite was peaceful and silent. In the courtyard below, hundreds of candles lent an otherworldly glow to the gleaming white tiles and moonlight darted off the calm surface of the Caribbean blue pool. Suddenly a deep groan disrupted the tranquil night, followed by an almost inaudible thud. The thief, still holding the terrace rail, pulled in his rope and left it lying in an inconspicuous pile behind a lounge chair. He might need it again.

Spreading his lock picks in his fingers, he chose one of the smaller pieces and slid the rest back into his pocket. It took five or six painful minutes of tapping and prodding inside the lock before the pins finally gave way. His hand covered by a baby blue latex glove, he nudged the door open and glanced around inside the suite.

At four in the morning, it was safe to say nobody would be moving about, but you could never be too cautious. It took him a few brief seconds of surveying the room for him to locate his prey. She was lying in the middle of the bed, deep in sleep, unaware of the world around her. In addition, she was alone, exactly as he’d hoped she’d be…