“One of my favourite features of the Custodian novel are the ‘Kevlar Kubitz’ that transport corporate drones i.e. You The People, from your CDZ or Corporate Dorm Zone to your offices of The Industry like mosquitoes trapped in amber. 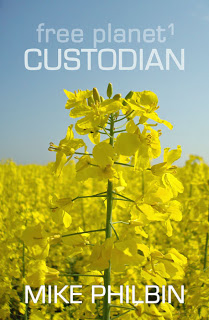 They have this ‘genetic muzak’ that plays in your back brain that you can only ‘hear later’ while you’re digesting the odorous tasks of the working day. And they don’t always tell the truth. Though it’s not like you’ll have any discernment anyway, so any old crap story works. The more lurid and insane the better.

“But there are ‘scintillas of truth’ therein. If you know what you’re being told. This particular bit is pulled straight out of the early part of the novel when you’re not quite sure what your heroic role is.

P.V.s or Psyche-Vertisements, another ESI ready-to-wear, will push any old marketing to the core of your brain during your daily commute: here’s a classic.

January, 1932. Dusseldorf, Germany. Everyone knows the story about Lord Adolfus Hitler, ‘cos you can’t unknow a psyche-vertisement until its contractual erosion time has expired’. Heil Hitler, so the story goes, had just given a rousing speech before the Industrial Club in Elberfelder Strasse, just round the corner from where you recently worked in Wupper Strasse in what’s still known as Dusseldorf in what once was called Germany. Heil Hitler was leaving the meeting, his protective entourage surrounding him, and he just slipped on something in Elberfelder Strasse, right outside the steps of the Industrial Club.

Died on the spot.

Everybody knows this … it’s part of your Industry Education.

“Your modern day Kevlar Kubitz is a top-secret organism with some very special armaments and modes of self-preservation, multiple tactical-scenario search and chauffeur capabilities; the ultimate caring shepherd. One of the really sexy things about the Kevlar Kubitz is the way a spherical volume of them (not exceeding 300,000) can swarm-transport an entire Satellite office from one location on the global game board to any other location on the global game board at a moment’s notice due to its ProM.I.S. driver software that sings songs to a space-based network of quantum relay stations.”

“For The Love” Markets and Author Respect