Chapter 17
On New Year’s Eve, Mary, Sheila and a crowd of the regular party- goers went down by car to Whitehead, a quiet little seaside town with an elderly population. They parked near the seafront and walked down to the promenade in a noisy group.

The moon shone peacefully over the sea, reflecting the ripples in a broad path. Mary stretched out her arms theatrically towards it and declaimed in a sing-song voice, 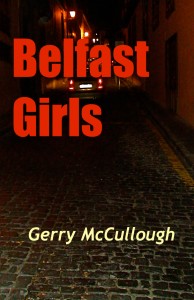 “Oh, the moon shines brightly on Mrs. Porter And her daughter,

She and Sheila linked arms and ran wildly down the pebbly beach to the sea. Kicking off their shoes and turning up their jeans to their knees, they ran into the rippling, shallow icy-cold waves and splashed about

“Let’s walk ’round the cliff path to Black Head,” someone suggested

Laughing and chattering, the group gathered itself together and made its way slowly along the concrete path at the edge of the shore beneath the looming cliffs which led in the direction of Islandmagee. Mary and Sheila carried their shoes in one hand waiting for their tights to dry out. After a while the rough surface became too uncomfortable and Sheila stopped to slip hers on again, leaning for the purpose on the arm of Charlie Flanagan who was a regular at the parties and, Sheila thought, the main source of supply. Charlie now attempted to get his arm round Sheila when she had finished putting on her shoes but she pushed him roughly off and ran on ahead.

Shrugging, Charlie turned his attention instead to a more accommodating girl.

Sheila caught up with Mary, who had wandered on by herself, and the two skipped happily along, giggling and singing to themselves. After a while, the party came to an open space where some trees grew, and Mary, who had been there before, pointed it out to Sheila.

The words seemed to be taken as a general signal to stop. Bumping into each other and looking round vaguely, the group came to a standstill. The trees formed an attractive background although they were in no sense a forest.

“Let’s go and sit down,” suggested a boy called Tim.

Leaving the path, they wandered carelessly over the ground with its thick covering of pine needles. Presently they came to a halt in a more open place and began to settle down, in ones and twos, in some sort of rough circle under the branches. A joint was lit up and passed from hand to hand.

The moon slanted down through the trees, lighting up the young faces, intent or dreamy. Sheila leaned back against the trunk of a tree and inhaled deeply. At some level, she was aware that this might not be the best thing to be doing. John, she knew, would be not only shocked, but angry, ragingly angry, she supposed, if he knew what she was getting into.

So what? If John cared about what she was doing, he would have got in touch ages ago. Heaven knows, she thought bitterly, I’ve tried hard enough to contact him. He won’t even let me say I’m sorry.

All around her, she became aware, with a heightening of her senses, of the brightness of the moonlight, the sharp smell of the pine trees, the soft, prickly feeling of each individual pine needle beneath her. Her ears picked up the gentle lapping of the waves and the rustling of the wind among the branches, and she could hear her own breathing magnified a hundred times as she focused her attention on it. The pine needles shone as if lit up by electricity, bright green mixing with gleaming bronze.

She became aware, after what seemed to have been years, that people had begun to jump up and run and dance among the trees. There was a great deal of shouting and laughing. She sat still, feeling relaxed and at peace, with no inclination to join in.

Then all of a sudden, a desire came over her to dance and leap and shout. She sprang to her feet, moving with a wild vigour and pleasure, and began to dart about among the trees, chasing the others, running away, coming back again.

Without really knowing when she had first become aware of him, she realised that Charlie Flanagan was following her closely. From time to time, he reached out, trying to catch hold of her but always she managed to elude him. It became a game. As soon as Charlie came within reaching distance, she would spin happily round and escape him again.

It was fun. Sheila found herself laughing a lot. Then suddenly it was no longer fun. Unexpectedly, Charlie managed to catch her and, before she could avoid him, he pulled her down and was lying on top of her, with his arms round her.

The feel of his coarse, tickly hair on her cheek roused Sheila from her dream. She didn’t even like Charlie Flanagan. She found him disgusting. Thumping his back with her fists, she tried to push him to one side. But it was too hard.

The effect of her last smoke began to kick in. She felt her head begin to whirl. Suddenly it seemed a pity to stop Charlie. With one part of her she no longer cared; with another part she quite wanted him to go on. She felt, as if at a great distance, his hand tugging at the zip of her jeans and his struggle to pull her clothes down over her hips.

Something in Sheila pushed and struggled its way to the surface, screamingthroughthemistinhermind“No! No!”

What way out was there?

Sheila found that Charlie had managed to undo the buttons of her blouse. Reaching under his arms to pull the material closed, her hand encountered something metal attached to her bra strap.

Just before coming out, too late to stop and sew it properly, she had discovered that her bra strap had come apart and had effected hasty repairs with a large safety pin.

Putting out all the strength she had left, she clicked the pin open and dragged it from her bra. She picked a spot high on Charlie’s inner right leg where he had pulled his jeans eagerly down and left himself unprotected by their thick cloth. She thrust the sharp point of the pin viciously home. Charlie, suddenly aware through his drugged consciousness of an agonizing pain in a precious and vulnerable region, leapt clumsily to his feet screaming.

Sheila scrambled away, crawling on hands and knees at first until she was able to stand. She ran over to Mary who was still sprawled beneath a nearby tree.

“Let’s go,” she said abruptly. “This lout is giving me a pain.” But nothing to the one I just gave him, she giggled internally.

“No rush,” said Mary dreamily. She continued to gaze at the moon, a peaceful smile lighting up her face, moonlight gleaming on her blonde hair.

She felt angry but, although she pushed at Mary, there was no noticeable reaction. Mary continued to half sit, half lie where she was, shrugging off Sheila’s hand as if she was hardly aware of it.

It was no use.

Sheila sat down again beside Mary, leaning against the same tree. The effects of the cannabis seemed to have worn off and she hesitated to smoke again, although another joint was circulating. When it reached her, she passed it on untouched to the nearest person.

No-one seemed to notice or care.

She had no desire to have any further relations with Charlie or, for that matter, with any of the other boys present. Not, to be honest, that Charlie seemed to want to have anything more to do with her! But if she smoked more blow, who knew, she wondered, how she would react if he, or any of them, grabbed her again.

There seemed little danger of that. Charlie lay on his stomach, groaning loudly, oblivious to everything and everyone but his injury. All around her, Sheila was aware of the rest of their company, some lying down, others still moving about and exclaiming in loud voices in reaction to their heightened perception of the sky, the trees, the sea. It would be a long time before they wanted to leave.

Sheila had permission to stay overnight with Mary for New Year’s Eve, so she was not worried about her parents expecting her back. The party, which had begun in Mary’s house, had moved on to a nearby flat in time for midnight. She had hoped to meet John at Mary’s house, but apparently he was out, working on a BBC New Year’s Eve programme. Sheila told herself she didn’t care.Then had come the suggestion of the trip to Whitehead.

“A trip in both senses,” Mary had giggled.

No-one seemed to expect to go home that night. Sheila shivered and pulled her jacket more tightly round her. At least it wasn’t raining. She supposed the others were insulated from the cold by the effects of the cannabis. She herself had felt warm and happy until Charlie’s attempt to get too friendly.

Perhaps she should have another puff. It was going to be a long, cold, miserable night otherwise. But looking at Charlie lying on one side, with his arms stretched out, snoring now, she shuddered instinctively.

Anything was better than risking a repeat of that. Surely, even if she was higher than the birds, she wouldn’t let him near her, but she knew that it was only too possible.

That settled it. For the rest of the night, Sheila sat huddled against the pine tree, trying to get some warmth from Mary’s back which was next to hers, wishing glumly that she had stayed in instead for the family New Year party as she had always done before. At least she would have been warm, if very bored.

Thank goodness she had stopped him in time and was still a virgin. Supposing she had got pregnant? That would have been too awful for words.

Dawn came at last, a pale sunlight breaking over the mostly sleeping company. Hours later, they packed themselves up and wandered back to their cars.