It was his misfortune that he drank too much cheap wine that night; that he stumbled down the street, coming quickly onto the radar of the Collection Team.

They followed him, and using the checklist, they confirmed him as a target. So when he turned down an alley in his trek to find a secluded cardboard box to sleep it off, they closed in.

Exiting their vehicle with precision, they entered the alleyway. They worked well together, being chosen by company’s exceptionally high standards, excellent training, and true enjoyment in their jobs. Overpowering the victim, which was never too much of a struggle, they injected him with a sedative. Care was given not to damage the merchandise; they caught him as he slumped down, and then threw him over a shoulder, and carried him to the vehicle. The procedure only took a few moments, and they were gone, no one the wiser. 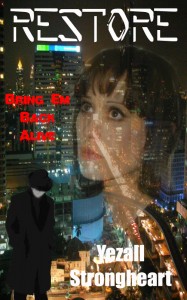 Laura Cromwell bounded up the flight of stairs to her office, not because she was late, but because she liked being there early. That way she would have time to obtain coffee for herself and her boss. It was part of her job as far as she was concerned; she liked pleasing him. She was so much more than just a receptionist; she was an important part of Dr. Moore’s day. From the first day she started at Restore International, at nineteen years of age, she had a thing for her boss, Clayton Moore, who was older, somewhere in his forties. She would do anything for him, and she did. Now in her late twenties, the highlight of her day was waiting for him to call her into his office. They were comfortable with their arrangement, both having separate lives outside the office.

Dr. Moore looked up from his computer screen to see her shapely form walking toward him. A look of lust crossed his face, which Laura noticed, and it made her smile.

She wiggled her way around his desk and bent over in an exaggerated manner, making sure her ass was accessible. “Your morning coffee, Sir.”

His hand slid over the roundness of her ass, he smiled as he gave it a good sound slap. “Morning, beautiful.”

She smiled back and turned to go back to her desk. Before she closed the door behind her, she stopped and looked at him, giving him another seductive smile.

Sitting down at her desk, she tied back her long chestnut hair. The calendar was full until this afternoon so she sighed heavily when she saw the first clients outside the glass door, about to enter the office. They gingerly entered, looking unsure, shy, definitely uncomfortable.

The man stepped forward, “We have an eight thirty appointment with Dr. Moore.”
Laura smiled sweetly, “Yes, how are you today Mr. and Mrs. Ford?” She extended her hand, not actually expecting an answer she went on, “Please fill out these forms and the doctor will be with you shortly. She handed them a stack of papers, which they looked at dauntingly, then they sat in the comfortable seats with tables attached. Laura pressed a button on the phone, “Mr. and Mrs. Ford are here.”

A clear voice came over the speaker, “Please show them in when they have finished.” Dr. Moore knew he would have at least fifteen to twenty minutes before they would walk through his doorway. He took this time to analyze some reports. The ratios had to remain constant for the business to survive. Apparently the last evening’s activities had been lucrative, they were ahead of the game. Still, no time to relax, it could change quickly.

Dr. Moore had started the bones of this business in his college dorm, back in 2103. Now over twenty years later, it had made him one of the wealthiest men on the planet. He had worked hard for it. Time travel had been in its infancy, but he saw its potential. He still needed science to catch up on other issues he needed worked out. He poured himself into his work, married for money, and kept his eye on the prize.

Laura knocked softly on the door to alert him, then opened the door showing the couple to seats in front of Clayton’s desk. After shaking hands and welcoming them, Dr. Moore took the stack of paperwork from them and took a few moments to go over them. Laura sat quietly waiting to take notes. Most of these meetings were the same; the distraught clients stutter and cry through a gut wrenching story of why they want to take advantage of the services of Restore. It used to affect her, but all the stories were pretty much the same, and she was jaded by the repetition.

Restore – Bring ‘em Back Alive! by Yezall Strongheart,
to be released early Fall 2012