“Our fathers approve the match.” He skimmed a pebble across the fish pond.
Alis watched the stone skipping across the water. Her heat-beat skipped like the stone and she prayed she was not blushing. “And you?”

She could not recall his name, but how could she not be distracted? She had woken and risen a maid, a spinster intent on learning. Now she was betrothed to this stranger. 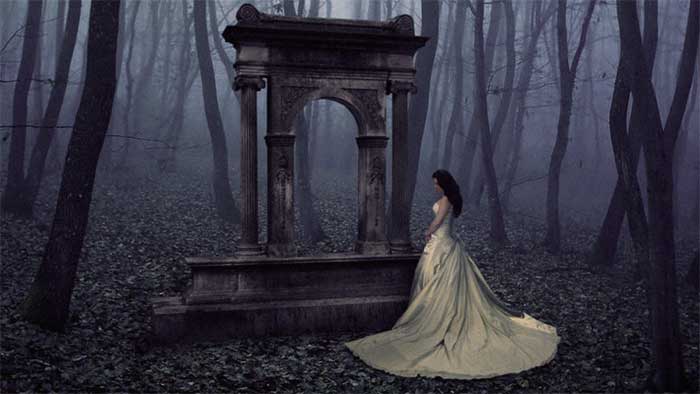 “I am not displeased, Alis.”  He offered her his arm to assist her across the ditch – the parents had sent them off to admire the lord’s new rabbit Warren, to see the baby Coneys, as her father had said. Could any symbol be more obvious? In a burst of resentment, she ignored her betrothed’s hand and jumped the ditch in a swirl of skirts.

“I’ve seen you dance before,” Peter said – Peter Fletcher, that was his name: he had been away, in the city – “You were in your father’s woods with your nurse. You had primroses in your hair.” A dark flush stole across his face.

“Is it still golden?”
Alis touched her veil and nodded. She remembered that day in the woods. Someone had pinned a posy of flowers on the path. She glanced at Peter, with his mop of plain brown curls and hazel eyes, and wondered if he had left them.

“I hoped you would find my posy, then,” he said softly.
“I did.”
“Now you will be a carpenter’s wife. Does that suit? You were not bullied to accept me?”
“No,” Alis said, although mother had told her that her father could not afford a large dowry and, for the sake of her younger sisters, she should accept Peter of Elsby’s offer. “Are you still ‘prenticed?”
“I finished my master-work this summer.” Peter suddenly lunged off the narrow path, into the trees. He returned with a fistful of bluebells which Alis waited to receive but instead he walked faster, moving ahead on the path. “Not far,” he called back.

“I know where the warren is,” Alis replied, biting her tongue the instant she spoke. Peter of Elsby might still admire her hair but he might dislike a forward girl. “I know, sir.”
“None of that.” Peter caught her hand, or would have done had he not been gripping the bluebells. As he fumbled, the flowers scattered over the grass.

“Christ, I am all thumbs today,” she heard him mutter, and felt better herself. She took his hand and felt his warm strong fingers encircle hers.
“Where are we going?” she asked, as the path forked and he drew her to the smaller track, away from the woodland warren.
He lifted her hand with his. “There.” He pointed.

Her breath stopped. In a glade of bluebells, surrounded by Bluebells, stood a house. A timber house, entirely of wood, roofed with wooden tiles. It had a blue door and blue window shutters.
“I know you like blue,” was all he said.

Alis clapped her free hand to her cheek. “Your masterwork!” she guessed, amazed and touched together. A tiny thing it was, no larger than a shepherd’s hut, but perfect. The door had a carved handle in the shape of a cat crouched to spring – she wondered if he knew that she adored cats. “You made it for me?”
“You like it?” He answered without answering her.
“‘Tis as pretty as a jewel casket.”

Beside her she felt Peter relax a little. “It’s called the bridal house.” He tucked an arm about her waist and lifted her. “A bride is carried across its threshold.”
Alis rested her head in the crook of his arm and heard his heart pounding as swiftly as hers. “You knew of our betrothal before me.”
“My father spoke to me last winter. I asked for time to make this. I wanted you to see -” He broke off and pushed at the door, then stopped. “A bride is kissed at the door, for luck.”

His lips brushed her forehead. When she remained easy, he moved on inside.
Alis gasped. Honeysuckle wound through the rafters, cowslips from the meadow filled wooden cups on the table. Away on the longest wall rose a ladder to another floor: a private room, she guessed. She was too shy to look at it for long.
“The bridal hall.” He turned with her, allowing her to see the frieze on the walls: a golden girl dancing, then he set her down on a chair carved with bluebells. “The bridal chair.”

He took a seat beside her and poured her mead from the wooden jug on the table.
“Your chair is larger.” Alis dare not taste the sweet drink: she was already light-headed.
“The groom’s is for two.” He patted his knee and grinned as she rose and sped to open the shutters.
“This is mine?” she asked.
“To do with as you wish.”
“Show me more.”

Peter strolled to a corner and drew back a curtain. “The bridal library.”
There was a shelf for books, and a good candle, and a stool. The walls here were painted white, the better to read besides. Alis ran a finger along the shelf, wondering how the warm, clever fingers which had fashioned this would feel against her skin.

“A learned wife is good,” Peter said, approaching. “No one dares cheat me, then.”
“No one dare anyway,” Alis remarked, skimming a hand across his hard chest. His eyes gleamed at the contact. “Show me more.”
“We must go upstairs. The bridal chamber.”
Alis nipped her lower lip with her teeth. His care and patience moved her, but she was still wary. “This is so new,” she admitted.

Peter kissed her a second time, now on her lips.
“Tomorrow?” Alis wrapped her arms around his middle. She wanted him to kiss her again, embrace her mouth again but was not sure if she should ask.
“Tomorrow.” His mouth came down on hers, to sweetly seal their promise.

I write historical fiction, mostly with a romance theme, set in ancient Rome, Greece and Egypt and in medieval England.