If there was such a thing as a level within a level, Inner Corridor was it. The other twenty-six levels from A through Z were bunched together as what Boyd would have initially imagined to be the majority of the Power Authority’s surface area, but this was horribly far from an actual truth which saw the lowest twenty-seventh level as a circumferential depth that enveloped the entire core of Dio Qze.

For as far as Boyd had gotten off of hacked access to the maps of the Power Authority, he found that the nosy view of his enhanced gaze was again blocked out from him. Whether this occurrence had to do with interference from the core or reinforced shielding seemed unclear at the moment. What was clear happened to be the idea that those on the other side of this door would be in the same boat of blinded navigation, but the advantage belonged to the Enforcer. The status of him playing the part of a virtual specter had never been relinquished, and with a surface area that was about to become even wider, the house could no longer be said to contain any sort of advantage that would normally have come with the bonus of home court familiarity. 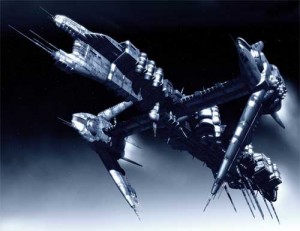 About the last piece of information that Boyd could ascertain from this immediate vicinity before all further intel that came from beyond the doors was blanked out from the prying eyes of his minicomputer happened to be the presence of an intricate ventilation shaft system. The ducts were located everywhere along this last leg of Level Z – at his feet, high above his head, running through and along the walls. Tempting as the idea was to traverse this network in order to retain an ultra secrecy, he thought better of the caveats. And there were several of them running through his mind at this point. Some were obvious like the possibility of getting turned around, lost, and trapped. Others might have appeared to be sneaky had the Enforcer not considered the implications and instead fallen into their mercy like the question of what was actually being piped through this infrastructure. It was clear how he needed to proceed next.

Much to the surprise of two Galaxy Bloc soldiers whose job it was to secure the entrance, they witnessed not the unmasked face of a wanted intruder but the buzz saw of an aggressor who sought to mar any recognition of facial characteristics with the uncertainty that came from unconsciousness. After all, this was the type of thing that the unincorporated planets felt could be handled without the aid of the Space Force, so these troops should have welcomed the test and relished the challenge.

To kill or not to kill – there was not even a question. Boyd charged through the doorway and launched into guerrilla-based tactics with a clear intent to incapacitate – not slay. Two knocked out soldiers would cause two more to have to come to their aid and look after them, netting a total of four troops who were no longer looking for him. Taking the time to do the math added up exponentially in the positive when it came to an equation of patience.

Truthfully, Boyd could easily lay this entire place down a thousand times over with the million laser pulse capacity within just one of his LUNC’s, and he carried two of those handguns. But this would make the soldiers’ job of finding him that much simpler because he would have laid out the cards of an established intent which could allow them to delay tending to the already dead and gone in favor of attending to the manner of tracking the Enforcer down. With confusion and what he considered to be an earnest and fair amount of compassion for enlisted troops who were only following orders, additional breathing room would be achieved. Besides, what was the point of his pursuers settling in on his purpose when he had not yet even ascertained that little tidbit for himself?

Good with his gloved hands, Boyd used his left hand to knock the laser rifle of the first out of position soldier from the immediate foreground aside before following through with a right hand punch to the troop’s face which spun the stunned person twirling forward into a thoughtful yet purposeful grasp. Holding up the slumping individual whose eyes were watering as the result of an impactful sting originating from the base of an almost broken nose, he now possessed a Human shield with which to leverage the taking down of the person’s partner.

The other soldier fumbled around a bit in order to ready the second laser rifle of this match, but there was just no shot. Now, the weapon might not have been as powerful as a LUNC but was far from a pushover. However, in this case of the troop’s partner being between the barrel and Boyd, it was completely useless.

Always the opportunist, Boyd took advantage of the situation by thrusting his hostage forward – causing the remaining soldier to react by the instinctive default of a flinch in catching the person and caring enough not to see a partner fall helplessly to the floor and the potential of further bodily detriment. What the troop wound up seeing was stars after the Enforcer launched into a spinning jump kick over the top of a two body mass which had now become a crumple of the pain-induced slumber variety. Upon touching back down with both feet and the flare of his trench coat settling into the drape of its normal hem, he was quick to locate both laser rifles, confiscate, and discard them in the nearest closet – anyplace out of the open where they could not have been readily retrieved.

With communications stymied by whatever was going on in the area, it would not take all that much time for the savvy to just step into the stairwell and call for reinforcements, so Boyd hurried down the rest of the way through this corridor and dashed inside a massive bowl-shaped command center before ducking around into a maze of cubicles – stalking his way toward the room’s epicenter via a randomized path that happened to be guided by adrenaline rather than instinct. Soldiers were everywhere throughout this location, and he now found himself leaning with his back up against the plywood walls of somebody’s desk – crouched down but in an optimized position to be able to move once a wave of yet another set of paired together troops marched along its opposite side. The only thing that mattered to him was the chance to see what all the military fuss surrounding this place was about, and his minicomputer continued to record any findings albeit at an interestingly limited distance from its normally unmatched and unrestricted data capture range.

A belly crawl would have been too slow plus nosy, so Boyd swung around and set about the swiftness of a sprinter’s dash from their famed start position in order to fly past the aisleway which had just been patrolled without those soldiers being any the wiser. Tightening spaces abounded as he weaved his way in, out, around, and between the crevices of what would have appeared to have been an entire floor of office space. Nimbly, the Enforcer hopped over a waste basket which lay beside the closed drawers to a two-foot high filing cabinet – somewhat sticking out in the middle of the aisle. He also made sure that his trench coat cleared the obstacle in doing so.

It was imperative to be not only quick on his feet but light as well because stomping about the rows of cubicles like an open admission of him barging in would have been just as bad as taking out that waste basket back there. Boyd turned a corner into what felt like the most centrist portion of the room and pressed his back up against the side wall of another cubicle that served as an endcap to its row. Seemingly without getting turned around, the Enforcer’s sense of direction compensated for the lack of his minicomputer’s directional coordination. In eventually needing to navigate the way back toward the entrance to Inner Corridor for escape, that had better not have been a fluke ability. Getting out was going to be a whole lot harder than breaking in, and the visitor would then wind up losing the previously enjoyed advantage to the house.

Ironically, simple snooping around was becoming tricky as well. Boyd made a quick check of the peripheral view by turning his head from side to side in order to peer down the open-aired and circular track-like corridor. He felt like the whole area was similar to the inner ring portion of a disc by its rounded construction. This was fine. Galaxy Bloc’s comfort in building functionality was of no concern to him.

But the part that bothered Boyd most was what he saw when he turned around to face forward and ventured across from his current position on over to the windows that formed the furthest inward point of Inner Corridor. It had already been ascertained earlier in his thoughts that he was not a botanist, but the Enforcer was not an engineer either. Being this deep within a synthetic planet, many people from across the universe were afforded an opportunity to take a field trip down to the extended containment array which held the particle-accelerated remnants of a collapsed star – reignited to form the world’s core and sole means of a power source.

So where was it? Was this why the presence of Galaxy Bloc soldiers was so thick? Who cultivated such a monstrous and energy dense…plant that it could circumvent Dio Qze’s primary power demands for a core? When could this even have occurred? What in the universe was going on around here?

Again – Boyd was no engineer, but how was this even possible? He should have seen it from the troops’ formations. To say that they were not at all concerned about him was too liberal of an interpretation in stating his imminent threat level, but the Enforcer was definitely of a secondary concern for them.

Clearly, their aim was meant to keep whatever that was on the opposite side of this window…in.

Art: Real or Not?

It Has Nothing To Do With Age