At one time, all of the children in this book lived on the streets of Kigali, the capital of Rwanda. Their parents died from the genocide in 1994 or from the AIDS pandemic. They have been given new life and hope at an orphanage called ROP Center for Street Children.

The stories from The Skin of Lions are taken from their personal experiences, traditional folk tales or unique creative imaginations. The children range in age from ten to nineteen and tell tales for all generations. They share their words from a thousand-year-old oral tradition and speak for all those that have been silenced.

The Skin of Lions by AHIKIRIJE Jean Bosco (Age 17)

There was a man, named Cambarantama, who looked after his sheep and cultivated his fields. One day, while he was looking after his sheep and leading them to the grasses, he found a small animal in the bush that had eaten some of his crops. When the man came back the next day, the same small creature had eaten more of his crops. He took the little animal back home and said, “I’m going to have to kill you for eating my crops.”

The small animal said, “Wait; please don’t eat me. Forgive me and I will not eat your crops any more.”

Cambarantama had a good heart, forgave the little animal and let him go. 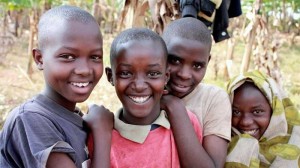 One day, on his way to his shamba, Cambarantama met the little animal that he had forgiven. The little animal said, “I see that you have less and less sheep. What has happened?”

Cambarantama replied, “There is a big animal that comes every day and makes me give it one of my sheep. That is why you see so few that are left.”

The little animal he had saved said, “The next time that big animal comes I will be next to you, hidden in a bush. I will tell you what to say.”

Cambarantama took his sheep to the grasses and the big animal once again came from the forest and told him it was time for him to give him another one of his flock, but Cambarantama said he would not give him any more. The small animal was hidden next to Cambarantama and spoke out loud.

“Who are you talking to?” asked the big animal.

The small animal said loudly, “I am the king of heaven and earth who puts on the skin of lions.”

“Who is that?” asked the big animal.

“What are you looking for?” shouted the little animal, hidden behind the bush.

“Sit down and don’t move!” shouted the little animal, who then whispered to Cambarantama to get the firewood rope and tie the hands and legs of the big animal.

That is how Cambarantama captured and killed the big ferocious animal and saved his sheep, with the help of the little vegetable eating animal he had forgiven.

MORE STORIES (All proceeds from sale of book go to ROP Center for Street Children.)