Where Have All the Hearses Gone?

Where Have All the Hearses Gone?

Funny the things you notice as a newcomer to a country. Halloween and its spooky front lawn decorations were a novelty for me. Some macabre displays in our neighbourhood triggered off the investigation on a topic that has been puzzling me for a while.

Having lived in Northeast FL for a number of years now, I had never seen a hearse or a vehicle that could pass for one. People still do die, even in a country that worships beauty and youth and often delegates old age and death are to nursing homes and critical care facilities. 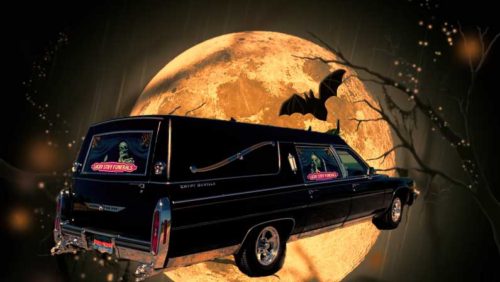 In Orlando, I understand, Disney sees to roads being squeaky clean and free of trash. Never saw a hearse there either. So how are bodies transported to and from funeral parlours in Florida?

Where I come from, funeral processions often paralyze the traffic. A hearse in Ireland drives at walking pace. The mourners are lined up behind it walking to the cemetery. Overtaking is frowned upon.

The University of Wikipedia defines a hearse as a funeral vehicle, a conveyance for the coffin and shows the preferred car models in North America, Europe or Japan: Cadillac, Ford, Mercedes-Benz costing around $50,000 with a life expectancy of about 30 years due to their light-duty and short and sedate drives.

Originally horse-drawn, they became motorized in the 1920s and for a while, doubled as ambulances. I can see why that went out of fashion.

Japan offers two types of commercial vehicles for this purpose, “Foreign” or “Japanese” style where the vehicle is modified to resemble a small, ornate Buddhist temple which requires modifications to the chassis.

In the seventies, hearses, due to their morbid nature and luxurious accommodation for the driver, were popular among some driving enthusiasts, mostly hippies.

A website called Grim Rides features a community of hearse friends in CA −where else?−I get side-tracked, as usual, clicking on links like the one to Hearses in Movies, e.g. the scene in Harold and Maude: “This thing handles well… Ever drive a hearse, Harold?”

Next, I stumble into a chat room for current and aspiring hearse drivers. So they must exist.

I press on and Google: “Why are there no hearses in US streets anymore?”

Up pops the visitor’s guide to St.Augustine: “Enjoy a ride in a real hearse and live to tell about it!” Furthermore, an article answers the question: Can a hearse carrying a corpse drive in the car-pool lane? Check it out yourself; I’m not telling…

And finally the New York Times with an article dated 19 June 1904 about the Slocum Disaster in “Little Germany”. Its headline says “Mournful Pomp of Death on Eastside” – A fascinating story about rapacious undertakers unfolds where a flower peddler’s wagon became a hearse complete with potted plants, and splendid police arrangements. A dozen links later, I’m none the wiser; all very interesting but hardly an explanation to my question.

Neither my American husband nor friends are of any help. Maybe the funeral homes use white vans with no windows, more like a handyman service or lawn care vehicle, someone suggests.

Have hearses been banned from the streets or are they only going out under cover of dark not to be seen or intimidate mortals? Maybe you’re never driving near their flight paths from home to church to the final destination, says another one. None of my friends is prepared for a nocturnal stake-out of a local funeral home to find out. I don’t have the courage to call one and outright ask the undertaker.

Then yesterday, I had a few moments while sitting in the bowels of St.Augustine’s monumental steam-ship replica car wash watching the suds fly, my mind drifted back to vehicular endangered species. Maybe St.Augustine’s Fountain of Youth has found the magic potion to make hearses redundant.

Then exiting from the bow of the ship I see one. A police car with flashing lights drives in front at a sedated pace, followed by a real hearse-like as I know it and black limousines tagging behind. In contrast to Ireland where overtaking them is frowned upon, here cars in the dual laneway quickly pass the hearse. (But then Ireland has not that many four-lane roads outside Dublin anyway.)

Waiting for the procession to go by, I get a real good look. Give me Trick-or-Treat any time, but no display of skulls, ghosts, or tombstones in my yard! I hear the bell tolling…