This morning I was just reading an article entitled New Generation of Airships about NASA’s plans to design a new generation of airships to transport cargo around the world.

Why for heavens sake? Surely NASA should be concentrating on what, until recently, they do best – producing vehicles for space exploration. 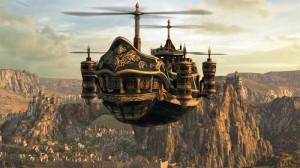 They complained when President Obama announced the closure of the manned space flights for the foreseeable future. Is this what that once great institution has been reduced to, redesigning old technology?

Given the, at best, erratic reliability of the Russian rocket systems NASA is forced to rely upon to carry cargo and men to the International Space Station, Obama should have a major rethink. Why end a successful programme practically overnight citing the huge costs as the reason for ending the shuttle programme?

It was bad enough when the Apollo missions were grounded. We have been told recently that at least three, possibly four more missions were planned after Apollo 17.

With all of the expertise at NASA’s disposal, at least use it to resurrect the Saturn Five rockets to deliver men and materials to the ISS rather than wasting all  that talent on turn of the twentieth century technology.

What’s next? Reinventing the horse and cart perhaps?