Michael Telstarr is a Remote Viewer who lives in an RV with solar panels.  He’s also born on Friday the 13th in 1962. 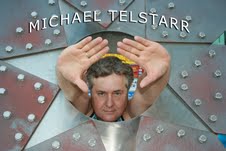 But there is more to him. He’s performed as a street performer. But in the past he went to the Monroe Institute.  “I took these one week classes,” he told me in a cafe downtown,  “I took these training courses back in 1997,” he recollected.

He even did the psychic fair circuit for twenty-four years. “I used to do forty fairs a year twenty-five years ago, but now I only do nine a year.”

Telstarr is a paranormalist and an escape artist. He has five world records. He still does these shows. He’s intent, however,  on getting back to hosting remote viewing seminars.

Right now he’s aiming to work in the university circuit, demonstrating and teaching techniques for remote reviewing. He’s been on the front page for the Toronto Sun four times, Edmonton Sun, and featured in a UK magazine.

He’s conducted a psychic reading for illusionist David Copperfield and American novelist Van Johnson.  Telstar has raised money for charity, $155,000 for the Multiple Sclerosis Society. When he performed as an escape artist his name was Scott Free, but he changed it back to his real name.

Michael Telstar is available for parties, conventions, promotions, and Jail Breakers!
He can be contacted by email,  at his cell phone 647-859-5316, on Facebook, or see him here on YouTube.