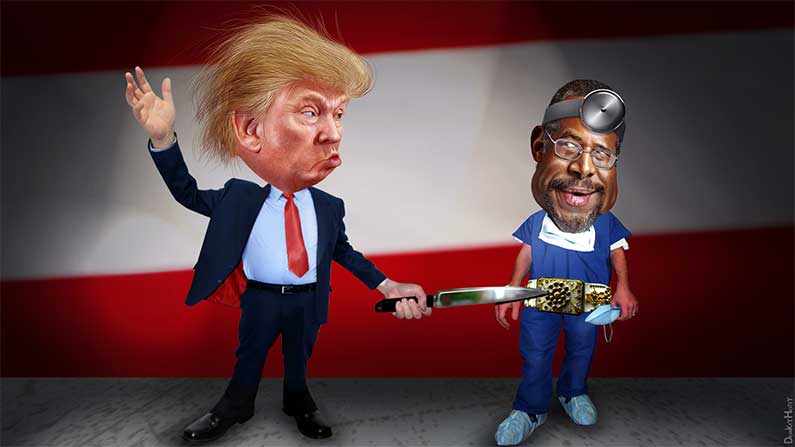 This essay turned out to be more serious than originally intended, but still, I figured I could have some end-of-year fun with the Presidential race.

We are coming upon the end of 2015 and the beginning of the 2016 Presidential Election.

I will start and finish quickly with the Democrats. With all small donations, Bernie Sanders is making it interesting; odds are he won’t win in the end. At Halloween, I imagined kids being sent Trick or Treating for Bernie Sanders, the way we did for UNICEF when I was young.

I attended City College of New York. There were all sorts of different socialist types. For you Monty Python fans out there, think Life of Brian. The Judean People’s Front vs. the People’s Front of Judea.

My late father Marvin Charton was a chemist. I didn’t need help hating Communism. Many of my father’s friends were from occupied Eastern Europe and continued to live there. My point in telling you all this? I see Socialism as a failed system. What makes Bernie Sanders think it can work? While he grew up in my hometown, Brooklyn, New York, he represents the small New England state of Vermont. Bernie is seventy-three now, and to me comes over as some of the older men I grew up around. I don’t like the idea of a President over seventy for several reasons:

I would love to see an agreed on “Who should be allowed to run for President of the United States,” based on physical health, a certain degree of education, and temperament. An Orwellian answer might be Americans testing in school, well not just for President, but other things. All interested candidates would be in a database, regardless of party. Then again, that could be a disaster. We could have two million candidates. Then again, that could be cut down for various reasons. The Presidency is a complex job.

I will end the Democrats with Hillary Clinton. She has so far dodged the barbs of Benghazi. She may glide or not, to being the next President.

I saved the brawling Republicans for later. I just mentioned Mrs. Clinton, so I will start with Carly Fiorina. She seemed to rise from the kids’ table in the Republican debates to the adults table, and now, she can argue with Hillary Clinton about Planned Parenthood and who represents women. I am staying out of this one.

Dr. Carson is in this too, though, his divinity may be slipping. The point? He IS the Messiah, many cry, we should know, we’ve followed a few!

The other candidates are still behind. It’s like watching the Kentucky Derby. I can’t help but think over many furlongs; there will be ins and outs. With the debates and demands of leading candidates being churlish and petulant, wouldn’t a barroom brawl be easier? Might be more entertaining.

Now, for your legal types, there is Ted Cruz. Is he, or is he not, a natural-born citizen? Probably, some high school kids think Canada is part of the United States. The Constitution never imagined a person born outside the country, but the child of an American-born parent. This was talked about briefly in 2008 with John McCain, but he was born in what was then United States territory If Senator Cruz is elected, I can picture a challenge.

I saved the best, or worst, for last, depending on your viewpoint. He is the easiest to lampoon, H.L. Mencken-style. He is…wait for it…The Donald.

Again, to quote Monty Python’s Life of Brian; is Trump Pontius Pilate? In another essay, I thought Julius Caesar. Again, think the end of the Roman Republic, beginning of the Roman Empire, though the Donald doesn’t have the subtlety of Octavian/Augustus Caesar. Subtle and the Donald parted ways a long time ago. You might call subtle, another Donald Divorce.

This is my silly take on why I THINK he is running. You can call this pop psychology as I have no training in psychology. I tried to get my friend, Rita, to draw up a psychological profile for the perfect American President. She would only say an ego that feels it can solve anything would be involved. Well, that is Donald Trump. I will throw this link in from a September Psychology Today.

The Donald has made statements that should be out of the world since I last wrote about him.

He wants to ban Muslims from the country completely until stiffer checks are put in.

No sane American questions stiffer vetting of those seeking to come here. Some of you have read my essays about my friend Anastase. In helping him write his biography, we will discuss how hard, it is to come here as a refugee. If you are coming here as a terrorist, it is probably easier to sneak across our border with Canada.

Is Muhammad Ali, the boxer, riddled with Parkinson’s going to become a terrorist suddenly? Donald, it is a good thing Howard Cosell is long dead. That would be interesting. Maybe someone will write a time travel like that.

Why do I think Trump is running? He’s probably bored. At this point, what’s another business deal? In essence, a late sixties age midlife crisis.

What about Hillary divorcing Bill, and Hillary and Donald marrying? As a wise person told me, The Donald would be looking for a new wife closer to the age of Hillary’s granddaughter.

Lisa Ling of CNN once did a series called Life. One of the shows was about Sugar Daddies. The Donald would not join the website and go to those parties. He of The Apprentice would create his own show to choose the future First Lady, on his own Trump Network.

I might come up with more silliness for this silly campaign.

Do You Converse With Angels?