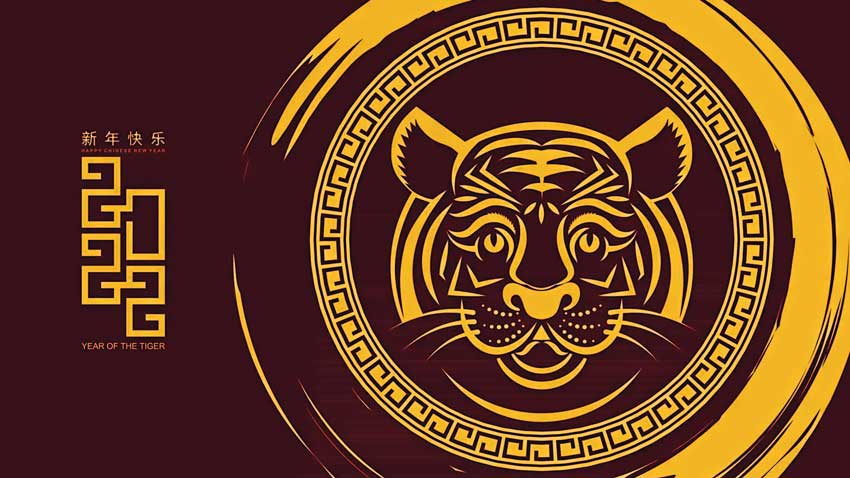 The Year of the Tiger

According to the Chinese Lunar Calendar, Chinese New Year, the Year of the Tiger begins its reign on February 1, 2022, until January 21, 2023, at which time the Rabbit takes over.

Each year is assigned an animal in a 12-year cycle. Asian people believe that persons have characteristics of animals that ruled the year of their birth, just as modern Astrologists believe that people born under a particular sign of the Western zodiac will have common traits.

Although reckless and restless by nature, the Tiger leads a colorful life and has a zest and love of life.

He has a dynamic personality, so be prepared for all the attention and activity surrounding him. Impatient and suspicious, he can make bad decisions. However, he does speak his mind when upset, but he is equally sincere, affectionate, and generous and does have a sense of humor. He also has a soft spot for animals and music and is not materialistic or worried about security.

In Chinese mythology, the Tiger symbolizes power, passion, and daring and commands respect. He is revered because he is fearless and is a fierce fighter as the sign that wards off the three main disasters of a household: fire, thieves, and ghosts.

In Asian culture, Spring Festival or Chinese New Year has been celebrated for at least 3,000 years and is the biggest celebration of the year, so it is much more important than all the holidays, even Christmas. This is a time to relax, dress up, eat and be with family and friends, and what would be better than to feast on delicious, traditional foods prepared for this special occasion.

During the two-week Chinese New Year celebration, meats, fruits, fish, vegetables, noodles will be consumed because what you eat at your first meal will determine your good fortune, health, wealth, and happiness.

Many Chinese American families like to make some special holiday foods. They spare no expense and are especially lavish with various assortments of exotic dishes like eggs that become “silver ingot,” mushrooms are “opportunities,” chicken is “phoenix.” A pork dish is called “Golden Goins.” Poultry signifies family unity, while oranges and tangerines mean wealth and good fortune, and pork provides happiness. A steamed fish means that all good things will last forever.

During this time, parents, grandparents, and friends will be honored with food gifts such as oranges, nuts, and pastries. This period promotes benevolence, reunions, family unity, remembrance, and people will pay homage to their deceased ancestors.

While many people born in the Year of the Tiger, along with their families, friends, and relatives, enjoy these special foods, events, and festivities, much can be remembered and learned from the past. Here are some of the many momentous and tragic events that took place during previous Tiger years.

On a positive note, in 1926, Mae West was ahead of her time because she never achieved full-blown stage and scene stardom until her play “SEX” made her a famous sex goddess. Under her pseudonym, Jane Mast, and her years of being humorous and in burlesque, she was well qualified to play the role that included sexual innuendos and graphic gestures.

Also, in 1926, Gertrude “Trudy” Ederle became the first Female heroine to swim the English Chanel. She completed the 35 miles trip in 14 hours and 31 minutes, thus shaving off two hours from a previous record held by a man. Ederle once owned 29 national and world swimming records.

In 1938 Kate Smith’s CBS Tuesday nights shows were the First Lady of Radio and will be remembered for her rendition of her signature song, God Bless America, which is still heard today.

That same year, Howard Hughes proved he was a heroic Aviator in July and landed his twin Engine at New York Floyd Bennett Airport after circulating the Planet for three days, 19 hours, and 17 minutes which is half of Wiley Posts on his 1933 solo trip.

In 1950, Japanese Cinema arrived in the West. Akira Kurosawa’s “Rashomon” was released in Japan to poor reviews and mediocre ticket sales. Kurosawa was so discouraged that he reluctantly submitted the film to the Venice International Film Festival the following year, where it won the Grand Prize. “Rashomon” also wins the honorary Academy Awards for the Best Foreign-language Film.
That same year in October, Charlie Brown was born. Yes, the insecure Charlie Brown and his daydreaming dog, Snoopy, the bossy, Lucy, and contemplative Linus.

The Beatles arrived on the scene in September 1962, and America was never the same when their song, “From Me to You,” hit number one on the British Pop charts, and they became the most popular musicians in British history. At that time, other songs filled our airways, like Acker Bilk’s “Stranger on the Shore” and Ray Charles, “I can’t stop loving you.”

In 1974, Steven King’s first novel, “Carrie,” in a movie showing revenge of a Prom Queen movie, is a great thriller. A malicious prank that sets Carrie off and his vivid scenes propel King into a one-person industry because of his ability to spin horror in human relationships into a supernatural spin.

On a more ominous note, on October 30, 1938, Orson Wells released a furor on CBS radio. He pulled a Halloween Prank inciting one of the oddest mass panics in history about a Martian Invasion of Earth. The radio play simulates a news broadcast with breaking bulletins and on-the-spot coverage of extraterrestrials landing in New Jersey and then disappearing.

Even though broadcasts were made after the incident that this was fiction, nothing more, millions of across country listeners were terrified and believed it, some even took flight, many families prayed, and others readied themselves for battle. It was severe, and Wells apologized and learned about the power of broadcasting.

China fought with the Japanese in 1938, and after many bitter battles, Japan gained control of most of Eastern China. The Puppet regime occupied more land, and Chiang Kai-Shek’s Nationalists government had to retreat at Chongqing to the West, where they were completely cut off from regular communications. Japan’s goal was to lead a “new order in East Asia,” which seemed like it was within their reach.

How can any of us forget what happened in 1974 and Watergate when President Richard Nixon came unglued after being accused of corruption because of his taping office conversations? He refused to surrender the recordings, which only made things worse. Even though there was no evidence of wrongdoing, he and his staff were forced to resign, which they did on 8/8/74.

In February 1974, Patricia Hearst was abducted at gunpoint at the University of California Berkely from her campus apartment. The Symbionese Liberation Army demanded a ransom and the family complied. Afterward, they saw on tape the abductee toting a machine gun and a sign saying, “I have chosen to stay and fight.” Then Hearst took part in an SLA robbery and freed two comrades caught shoplifting by spraying a storefront with bullets.

On January 29, 1986, we witnessed one of America’s most tragic disasters when The Challenger exploded at Cape Canaveral, Florida. We watched in shock and horror as the space shuttle blew up in mid-air at an altitude of fewer than 10 miles as the astronaut’s cabin plunged into a double cloud from the blast marking the demise of all seven on board.

And we thought nothing else as horrifying would happen again, but In April 1986, there was another blast. This explosion ripped through one of Chernobyl’s four reactors spewing millions of curies of radiation into the atmosphere. This was three times more deadly than Pennsylvania’s 3 Mile Island, which had been history’s worst nuclear plant incident.

Now that you have seen past examples of Tiger years, I don’t need to tell you what to expect in 2002. Just be prepared for an explosive year! So turbulent that it can be easily described as an omen for all kinds of disasters, disagreements, and even war. Scary! But it will be a year of fortunes made and lost, and friendships, joint ventures, trust, and cooperation could erupt because we need to take time out and not charge into something without thinking, so we don’t end up regretting our decisions.

This time we need to stop since the fiery Tiger is in control and has a temper since he rules this year. Don’t forget this was when Watergate and Nixon’s resignation culminated with other catastrophes like Challenger and Chernobyl, and they both lit up the skies.

Tiger years will affect everyone’s life but try to look at this from a positive point of view, perhaps it could be a cleansing effect, and it is necessary to extract metals from their ores. This can also bring out the best in us. So, a word to the wise because it will be an unpredictable year, so just hang on tightly and let things just fizzle out on their own.