When our government, hell-bent on saving money at all costs to alleviate the national debt severely reduces the numbers of police and other front-line services, should it come as a complete surprise? 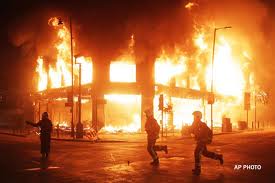 Plus, is it also surprising that the police seem reluctant to participate, given their lack of numbers?

In its ignorance and sheer stupidity, our government is now reaping the seeds of destruction sown by its short-sightedness.

These riots were bound to happen. When you alienate a large number of people with no hope of improving their lot, making them even poorer than they already are, or when you allow criminals free reign, knowing that the worst they can expect from the law is a slap on the wrist with a wet bus ticket, anarchy will rule.

The Minister for Home Affairs should allow the army to assist the police to deal out ‘street justice’ to these rioters. It would soon end their current reign of terror, and would also save the taxpayer a great deal of money in expensive court time.