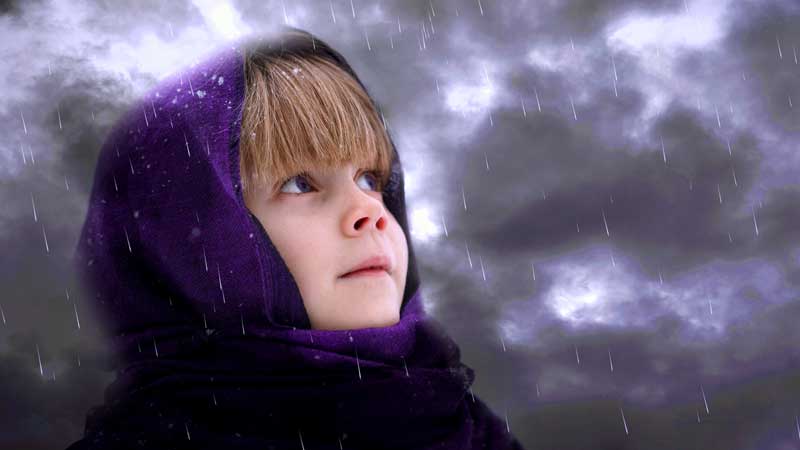 By mid-morning, the glorious clear blue sky had vanished. Ominous gray clouds now hung low as the onset of the predicted snowstorm advanced. This was to be a significant event, and severe weather alerts had been issued.

In anticipation of the imminent onslaught, my husband and I rushed around the farm to make the necessary preparations. A fierce polar wind nipped our faces and the temperature continued to plummet. At last, all that could be done was completed, and we retreated to the comfort of our home.

I brewed a cup of tea, settled down in front of the fireplace, and sighed with delight as the warmth of the embers caressed my bone-chilled body. How different we looked at life in our youth. Children welcome the first snowflake with great enthusiasm, and delight in a bounteous accumulation. Adults dread the downy white flecks and consider them an insufferable nuisance.

As I stared into the iridescent flames, a slight smile crossed my face. All thoughts were drawn back to a happy-go-lucky time when everyday problems did not exist and hearts had not yet been broken.

There is a brief instant in our lives when we are neither children nor adults. The transition is subtle, and we seldom realize it has even taken place. Not until we mature do we look back and pinpoint the moment this awkward, wonderful metamorphosis occurs. For me, the unique transformation took place at the end of winter, 1959.

Since early January of that year, there had been one snowstorm after another. Now a colossal blizzard of unparalleled proportions was bearing down on our small town and expected to hit overnight.

The ground was already blanketed in a carpet of white, preserved by glacial temperatures, and although the roads were somewhat cleared, they remained treacherous.

Unlike our frazzled parents, my friends and I celebrated—schools were closed. This unexpected event granted a brief reprieve from the unpleasantness of our studies and provided a virtual wonderland of enjoyment. Young, and naïve, we didn’t realize those wintry closures would lessen our treasured summer vacation.

I awoke at dawn, astounded to find so much snow had fallen overnight. It is said the great blizzard deposited over three feet of snow, which on top of the frozen tundra, topped out at perhaps six…a child’s dream come true. I was anxious to join my friends to see what adventures awaited. Unlike today’s youth, who have a wealth of electronic play toys, we had to provide our own form of amusement, and most took place outside.

A half-mile down the road was an abandoned railroad trellis. The snow-covered slope rose up a good forty feet and would award us a wild ride to the bottom. However, we were one jump away from being a teenager, and far too grown up to use a common child’s sled. No, there had to be a more mature means available.

A nearby factory-made cockpit canopy for military jets and might provide the perfect solution. The plastic domes could hold one, or two of us, without difficulty, and the molded curvature allows it to streak down the snowy bluff with intense speed.

It was common knowledge the imperfects were tossed into an outside compartment for disposal. A group of us entered the office, explained our intent, and asked if we might obtain a couple.

The manager was hesitant at first but then relented. “I remember a few escapades I undertook at your age, so go ahead, take three. Almost wish I was going with you kids. Now get out of here. Go have some fun, but for goodness sake be careful.”

We thanked him and dashed outside. Our enthusiasm was great but quickly stymied. One small factor had not been considered—the weight. The covers appeared feathery but were considerably heavier than anticipated. However, combined ingenuity prevailed. We managed to haul them away and up the awaiting slope.

. The first few runs were far from graceful, but soon the sturdy plastic bubbles formed a frozen luge of sorts. As we hopped in our fiery toboggans and launched down the slope, gasps resonated from the younger crowd who eyed us with undeniable envy.

In today’s world, these actions would be considered dangerous and halted, but back then such things were simply part of being a kid. Amazingly, not one of us came away with so much as a scratch. Our exciting adventure would never be forgotten—or repeated.

By week’s end the neighborhood lawns were littered with an unimaginable array of snowmen. Our time of freedom dwindled. Soon we would return to school. Days of winter bliss would give way to our education. Something spectacular was needed to elevate our handiwork…to make it known for generations to come.

After several in-depth discussions, and a great deal of research in every available encyclopedia, the decision was made to construct an igloo. The abundance of snow was not a problem, and we oozed craftiness.

A shiver prickled my spine as I recalled the day we started the task and the blustery cold wind that nipped our faces.

First, the building plot was cleared and leveled. Then, with the assistance of a well-placed shovel and some string, a circular layout was marked. The first layer of icy- bricks could now be put in place. Unfortunately, we had neither the proper tools nor skills necessary to form them with the required precision. So we improvised and used our hands to mold what we thought looked good, even though most were grossly distorted.

One by one we carefully laid the blocks, spiraling them upward and inward as the great books of knowledge instructed. By nightfall, the outline began to form and oddly enough had the appearance of the intended structure.

Early the next morning we all hurried to the construction site, anxious to complete our house and stand proud of the accomplishment.

A local newspaperman noticed our endeavor and decided this would make a great piece for his column. He began taking photos and notes to record our progress.

The roof was the most difficult and took several tries to get it secured, but luck was on our side. By early afternoon the last block was set in place. Now we needed to fill in the gaps and make a small entrance.

A tunnel-like structure was shown in the pictures but proved too difficult. Instead, a square entrance was made. The snow was packed in every nook and cranny until the structure took on the appearance of a solid unit.

Like the sunset, our task had been completed. My friends and I stood back and sighed as we admired our creation. To our amazement, many of our parents came out to view this accomplishment, and it was quickly becoming the talk of the town.

Tomorrow would be the last day before classes resumed. Each of us agreed to meet early in the morning at our newly constructed building, eager for a last-minute of enjoyment.

As I approached the site my eyes grew wide. I ran to join my friends who wore the same expression.

Cars were parked all along the roadside. A rather large crowd had gathered around our igloo. Some posed for pictures, while others just stared and scratched their heads.

We cautiously walked up and were instantly greeted by several people we didn’t know, each congratulating us on a job well done. Naturally, we puffed our chests in bold vanity.

The reporter soon arrived, with camera and recorder in hand. He asked if this was a fully functional structure wondered if it could be occupied.

Eyes beamed as all six of us dropped to our knees and crawled in. Up to this moment, none of us had been inside. Ironically, we found it to be astoundingly warmer than outside.

After exiting, we were posed and our picture was taken for the paper. Our goal had been accomplished. We were famous!

Guided by the hand of fate, mixed with a great deal of luck, six childhood friends managed to create a feat no one to this day has been able to mimic.

In a little while, our beloved igloo would pass into nothingness as the thawing warmth of the sun turned it into liquid.

We didn’t know it then, but our childhood had also come to an end. Like our igloo, these carefree days would become a wispy memory of the past. Spring would not only awaken the land but bring forth the adult that slept within us.

In a short time, we would rejoice with our country when a charismatic young Senator from Massachusetts became President, and weep with a nation when he was tragically slain.

A war would be fought and lost. Friends would perish, and we would endure the pain of a broken heart many times over.

It had been the winter we skated down an ice-covered street, built a ten-foot-high snowman, and held a contest to see who could make the best snow angel.

That wonderful, frigid season was the last time we turned our wind-blushed faces to the heavens, and giggled as the crystallized droplets of snow tickled our skin and merrily danced on our lashes.

It was the season my friends and I shared something extraordinary, as we laughed, played, and enjoyed our last winter of innocence.

Born in Philadelphia, raised in Millville, New Jersey. Moved to Miami, Florida in 1970. Married to Ken Martin in 1976. In 2007 we retired and moved to South Carolina, where we reside happily on a five acre farm. After years of working, time has now allowed me to pursue my dream career. Writing.