As we all get older, we tend to compare what is going on around us right now with what things were like in the so-called good old days of our youth. The members of this current generation will look upon the present day as their own good old days in years to come.

But were those times really as good as we remember them? 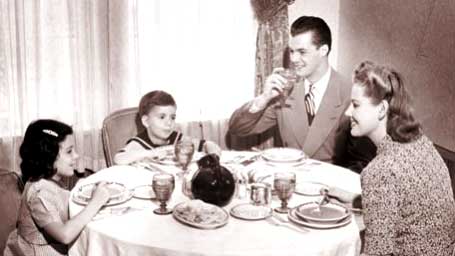 When I was a small child here in England during the late nineteen forties and throughout the nineteen fifties, while we knew no different, our lives were austere compared to today. Not everybody had a television – black and white back then. Plus refrigerators were for the rich.

My mother’s only method of keeping foodstuffs cold was a ‘safe’, not the kind you keep your money and valuables in, but a small compartment built into the wall of the kitchen, with wire netting on both sides to allow the cold air from outside to do its job.

My father was paid £5 per week. Criminals were subjected to harsh penalties

within the cold walls of the Victorian-built prisons. Murderers were hung. The only gangs the police encountered were bank robbers, unlike today.

Policemen patrolled the streets on foot, knowing everybody on their beat personally. If you were a kid who had done something wrong, you got a good hiding from the policeman, then he dragged you home by your ear to receive another from your embarrassed father, or mother.

You had brought great shame upon the family name. Needless to say, if you were sensible, you behaved yourself from then on.

Most people in town still lived in Dickensian-style Victorian semi-detached rows of houses with tiny rooms and no gardens. Each of these cold damp houses had an outside toilet, and everyone took a bath once a week, usually beside the fire in a tin bath, father first, followed by mother then the kids, all sharing the same water.

Hardly anyone had a bank account of any kind – why, because by the time the rent had been taken out, along with the electricity payment, and the food essentials for the week, not that the shops back then had much on offer, there was nothing left.

Suet pudding, or spotted dick (a steamed concoction made with raisins), the occasional small joint of beef, bread, jam, milk, tea, cod-liver oil, treacle, porridge, the occasional egg, these were the daily fare in the average working class home back then. If you had a tiny patch of dirt, you grew what vegetables you could to supplement the meager food supply.

No one had a telephone. Our only outside entertainment was either a mile-long walk to the nearest Cinema, on the odd occasion when there was a spare sixpence for a ticket. Usually, we listened to the radio.

Everybody lived in one room. By that I mean the tiny kitchen, gathered around the radio or huddled beside the fire. When winter struck, the interior of your home was often colder than outside. Windows froze solid with frost on the inside.

Could today’s generation learn from those times – yes?

Today, we seem to have completely forgotten how to live with, respect, and tolerate each other. Criminal gangs of youths roam our streets, causing mayhem, knowing full well that the police are hamstrung by the entire ridiculous current batch of laws, seemingly designed to protect the criminal’s rights rather than the rights of law-abiding citizens.

Were the good old days all that good?

In many ways, the answer is no. But back then, at least we all learned to respect authority, the law of the land, and our elders and betters. Would I want to go back in time to my childhood? No thanks, except for its simplicity, safety, and innocence.

How To Lower a Nation’s IQ