The Dark Side of Winning

All of us, including Hillary Clinton and Donald Trump, started off with the one real wealth; and that was, time on their hands.

For most of us, good health demands eight hours of rest. Nourishment, schools, or jobs require another eight. The third eight hours enable us to be the people we were meant to be. It is said, if you want to know a person’s character, find out what they do in their spare time when they think people aren’t watching. 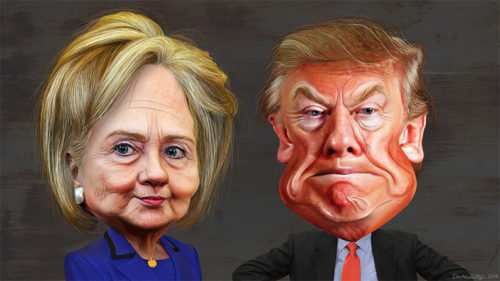 This can be a big problem for Donald. Most of us know what he is doing in the early morning hours. He’s tweeting and re-tweeting others’ tweets! There may be a law against this.

I don’t know. But I know in Hillary’s spare time she attends to family, friends, and works on improving our system in politics. She is studying how to be a righteous President. She has a great passion for the law and our nation and its people.

Filling our spare time with what we love will turn us simply into an original and unique human. The only thing that makes us happy is being happy with who we are, and not who people think we are.

I believe Hillary is happy with who she is. The Donald, on the other hand, doesn’t seem to be happy with anybody or anything. If he could paste on a smile, as well as, accept and be comfortable with his flaws, he’d be a more successful man, father, and husband.

She grew up between the push-and-tug of her parents’ values. Her own political beliefs now reflect both as well as her vast experience as a politician.

Her mother was a Democrat, and her father was a Republican. Her mother loved her home and her family, but she felt limited by narrow choices in her life. She started taking college courses when her kids got older. She took subjects she was interested in, like logic, social and child development.

She hated self-righteousness and pretension of moral superiority and impressed on Hillary and her siblings, that we were no better or worse than anyone else.

The great opposite of Trump’s upbringing and personality.  Her father was tight-fisted with money, who did not believe in credit and ran his business on a strict pay-as-you-go policy. His ideology was based on self-reliance and personal initiative, and he understood the importance of fiscal responsibility.

Unlike Donald, he supported taxpayer investments in highways, schools, parks and other essential public goods. Like so many who grew up in the Depression, his fear of poverty colored his life. The three lowest form of life to him were Communists, shady businessmen and/or crooked politicians. I don’t think he would like Donald; or the fact that his daughter has to outtalk and outsmart him if she is to become our new President.

There are two kinds of courage leaders must-have. One is a spontaneous explosion of aroused instincts to meet some sudden emergency face to face. Hillary has passed tests over and over these last 30 years. The other kind of courage is to stay steadfast against repeated failures and rebuffs and triumph through hard work. Hillary has also passed the test admirably.

She received so much negative publicity because of her problems of trust and the burden of Bill’s failed presidency. Both Hillary and Bill have what boxers call the “fighter’s heart.” This is the will to come bouncing back every time one is knocked down. All of our past and future presidents have had this courage.

Even Trump has been knocked to his knees in bankruptcy and business affairs, he always showed that extra something that it takes not to give up. Too bad now he’s complaining about a rigged election and the Media being against him to explain his falling numbers. He has used dirty tricks to knock Hillary off her game but has failed to do so especially this last Debate.

Bringing in women of Bill Clinton’s past made Donald look like a fool, and very unmanly, un- fatherly, and downright sneaky. These are not good character traits for an icon businessman like Trump or for the President of any country especially the United States, a country of immigrants, born with freedom of religion and democratic values.

Bringing in women of Bill Clinton’s past made Donald look like a fool, and very unmanly, un- fatherly, and downright sneaky. These are not good character traits for an icon businessman like Trump or for the President of any country especially the United States, a country of immigrants, born with freedom of religion and democratic values.

It is a common theory that the only time you don’t fail is the last time you try something, and it worked. Both Donald and Hillary have failed but Hillary’s reputation precedes her. Pacifying your ego by hurting others like Donald does never works, and it is about time HE started playing fair with both women like Hillary and men like Billy Bush.

This election may change the rules for all of us. It is so important to get out and vote. Vote your heart. Study the facts. Know the candidates. Remember to vote for the businessman Trump is now and/or the formidable politician and woman, Hillary is now.

She’s traveled tirelessly around the country to champion health care, expand economic and educational opportunities and promote the needs of children and families, and she crisscrossed the globe on behalf of women’s rights, human rights, and democracy. What’s Donald done for anybody lately?