The 20 something did not like that one at all.  I, on the other hand, find I remember only those who were part of a noteworthy time. “Wasn’t the religion teacher funny in high school?” someone would ask, on more than one occasion. I disagreed.

Why? When I played the flute for my high school senior band, went with the band on a 3-week school band trip to Hong Kong… that I remembered. And I offended them in such a recollection on more than one occasion! There are so many people who come and go in this lifetime. I found when I left high school and university, life opened up.

Yes, there are highs and lows but this is the new era. I see a lot of people around who are dead inside. They go to school, get a job, or not, and their lives revolve around the TV.

In the 1990’s, I found this society so closed. The Internet, however, has opened up things.

But still there are those who are dead inside. They eat pizza, get their drink at a trendy cafe, a beer at their pub, and when they open up their mouths, their spirit is a toilet. I meet very few enlightened people these days.

I find drug users and alcoholics have a romantic view of themselves. One can have that big home in the right area, the dream job somewhere but the deadness coming from them is stifling.

Very few people are brought together by ideas. Alcohol and drugs bring people together. And if they see themselves as select or chosen, the social rot begins. Some people ask me why I write certain articles.

The answer is very simple. Sometimes I come across a group of protesters on a street corner; I interview them, and then up it goes on the Internet. Otherwise, the deadness of others remains. I don’t think I would trust this generation with a time machine, or a spaceship. 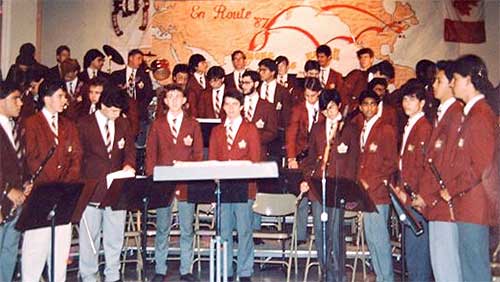 But there are people who one gets to know along the way, by chance, or fate. I learn their story, and when they are gone, I dwell on it.

Sometimes too much, for days, and years. I feel this personality trait helped me create characters on the page that were real.

I will have to write about that 3-week band trip to Hong Kong. I will do that in the future. That’s me in the front row, playing the flute. Senior High School Band Pic