November fourth, 1995, was an international day of mourning.

After completing a speech and rally for peace the Prime Minister of Israel, Yitzhak Rabin, walks towards the car and is shot and killed by a fanatical Jew whose mind has been filled with hate and propaganda. 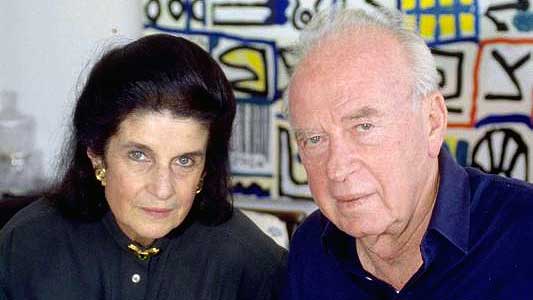 As he takes his last breath the peace process he’s dying for goes into cardiac arrest with only a slight pulse of that vision still palpable today. The shock wave of his death was felt by none as acutely as his wife of almost fifty years, Leah Rabin.

Unlike the spouses of other well-known leaders who’ve been assassinated, Mrs. Rabin did not hide away, go into seclusion or say, “It’s a private matter.” Her disbelief, raw pain, and agony were witnessed and shared by millions.

In spite of the loneliness that will “never end”, Mrs. Rabin kept fighting for peace, to honor her husband, and to provide meaning and purpose to a world that was turned upside down.

She followed her convictions and spoke out against the hate-mongers and naysayers at home and abroad. (Mrs. Rabin died shortly after she and I spoke in Tel Aviv on November 12, 2000.)

Mrs. Rabin: Death doesn’t change people. It’s what your disposition is to start with and how you cope with loss in the first place. Unfortunately, we live in a country where the loss of life, of children, of dear ones is almost part of our daily lives because of war. It’s how you are built at the beginning that makes you able to cope or not cope in different ways.

In my case . . . in our case . . . it’s different, it’s a unique phenomenon. The loss of, first of all, my husband of forty-seven years, a strong and good marriage, a wonderful father and grandfather, and at the same time, a great leader.

As you face this you realize from the beginning that it is not yours alone. You have to share it. The outpour of sorrow and loss and desperation of people was so huge, so overwhelming and so unbelievable. There had never been anything like this. I can only compare it with the feeling of the people in America when President Kennedy was assassinated.

He was the subject of great hope for the American people. When my husband was killed he was seventy-three years old and had been in positions of leadership throughout his life; first as a soldier, then commander, Prime Minister, Ambassador, Minister of Defense, and Prime Minister again.

He had accumulated a lot of experience and was a source of trust. People trusted him. “Why do you cry over Rabin?” a six-year-old child was asked. “I believed him and I trusted him,” they replied. And you hear again and again, “I haven’t cried over anybody like I did that night and the following days.” That’s what people tell you.

Maybe the murder of Princess Diana was similar with the same sense of injustice and outpouring of grief, but still, she wasn’t a leader in the process of conducting a daring, courageous move for peace. He had a great following . . . though not big enough. People trusted him and believed him. They trusted him too much. This was one of the problems.

A columnist after the murder said, “We trusted him and left him alone in the open, thinking he could do it himself, that we can go to Thailand and Turkey in the summer, have a good time, leave it to him, he’ll do it without us.” This attitude turned out to prove very, very wrong. He needed the people; he needed support on the street.

If I talk about it today I still don’t understand where we were. Where was I? In front of our house on Friday afternoon when he was due to come home people would stand on the street yelling for hours. Friday afternoon is usually a very quiet time because people come home from work around two or three. It’s siesta time, the shops are closed, and here’s this crowd yelling for hours.

When he’d get home I’d ask, “How can you bear it? Why don’t you do something? A group should come in front of them.” But it was so below his pride to deal with it. He was so convinced that he was the way and there was no other alternative to peace. He was conducting a process that he felt had to be done and would take a toll, take a price. And he would have pulled it through.

If he weren’t murdered we would have been in a totally different position today. What was building up was an inter-relation of faith, of trust, of doing it together. Trust is the main point – trust and respect. Today there is mistrust and disrespect. How do you build a peace process with people that you disrespect and you keep telling your people not to trust?

Terror does not destroy our country. There have been IRA terror for years and years and is Great Britain destroyed?! We were threatened by the overwhelming forces of our neighbors. Egypt tried to destroy us. The combined forces of Egypt and Syria and Jordan attacked us in the sixty’s war. We have proven time and again how strong we are, how we managed to be indestructible.

In my grief I turned to the people, to be there for them. Instinctively, I never asked, “What am I doing?” They needed something. You have no idea how many letters and comments I later received saying, “You helped. You gave us hope. You gave us courage.” Can you imagine?

Did I give them hope? Did I give them courage? Who was I? How did I do it? I really don’t know. I wasn’t aware. I just felt that if people were there for Yitzhak, grieving for him and being at our house, at the memorial, at the cemetery, then someone has to be there to answer their grief.

They were obviously moved deeply and I was the one who could share their grief. It was like they came for him, but they also came for me.

It was a very spontaneous reaction. In a way maybe it also helped me. Here I am sharing with so many people. When my husband was around and I had something disturbing me or troubling me I’d eventually tell him. The moment I told him I said now only half of it is mine and the other half is yours. (Laughs) Similarly, I think that talking to people makes me feel we are together in this grief.

The whole world is missing Yitzhak. In a faraway little village in India, they’d say, “You are from Israel? I have a friend, his name is Rabin and he was killed.” This handshake he made with Arafat really captured the world’s imagination, that there was a man who was changing the history of the Middle East.

I am trying to carry on his legacy. I don’t have to initiate anything. I lost my husband and at the same time, Mt. Everest fell over me. There is no end to the demand. “Come here, come there, get an honorary doctorate, get this, get that . . .” endless . . . endless. I’m constantly traveling.

I keep fighting . . . fighting for the peace and fighting for most Labor candidates. I was always supported by my husband to go out and speak, though I do a lot more of it now than ever before. I also have enormous support from my children and many, many friends in Israel and abroad. I can’t complain that I feel deserted.

At the same time, he is not here and I’m without him. This is it. It’s hard to imagine after fifty years . . . very hard . . . enormously hard. I hear his voice and I see him walking into the house. He’s still inbred in the house. We see him in every corner and have pictures of him everywhere. My home is where I belong, where I feel secure.

I’ve kept everything that belonged to him. It’s a way of clinging to what he was all about. There are his clothes, his shoes, everything. I don’t know if I’ll go on doing that forever.

We are approaching his seventy-sixth birthday so there’s going to be a lot of activity. There are always a lot of people at his memorial. There will be a big center that will carry his name as well. It’s called The Rabin Memorial Center for Research. It will not become a white elephant.

It will house a museum, library, archives, and research, all that was done after his murder. People are and have written poems, stories, and music about and for Yitzhak. On the twenty-seventh of April, there will be a requiem performed in his honor. It never ends really . . . never ends.

I have no regrets, none whatsoever. I feel blessed and privileged with a life full of purpose. Yitzhak’s plate was always full, always in front of him. He was always striving to fulfill that purpose, from early morning until late evening. When he finished his day’s work he was always wondering, “What haven’t I done today and what will I do tomorrow?” He never dwelled too much on achievement . . . on glory.

Now nothing really has the same meaning. I carry on but it’s so different . . . it’s not the same. While he was alive we shared this wonderful life . . . being there at almost every milestone in our countries history. What more could an Israeli couple wish for?

I realize I’m living with the past and not planning too much for the future, you know, just going on, just carrying on. It will never be the same. Never . . . ever. You look back and the natural tendency is to see the lights and forget the shadows. It’s not that there were no shadows, there were indeed.

When you summarize this kind of life and Yitzhak’s emerging from a soldier to the leader of his country, then conducting this very unique and dangerous peace process, he was very privileged. He saw himself as privileged. Unfortunately, now it is all destroyed.

I don’t believe it is irreparable, but it’s never been worse than right now. The Palestinians have stopped believing in us anymore. At the same time, there is a new reality already here. The Palestinians and the Israelis have mutual programs and continue meeting. Something has already been created on this road. We cannot turn back.