“The church no longer believes in a literal hell where people suffer. Like the fable of Adam and Eve, we see hell as a literary device.” ~ Pope Francis

With his unruly ways and photogenic actions, Pope Francis caused a media hype the likes of which we’ve only seen in the celebrity world.

Wherever he shows his face, cameras are clicking and every word from his mouth is news. Time Magazine called him Man of the Year 2013, and his pursuit of simplicity has added to his cool image. The amount of media attention for his person turned the new pope into a superstar. No matter what he says or does, the media attention is vast. Unlike anything we have experienced to date. 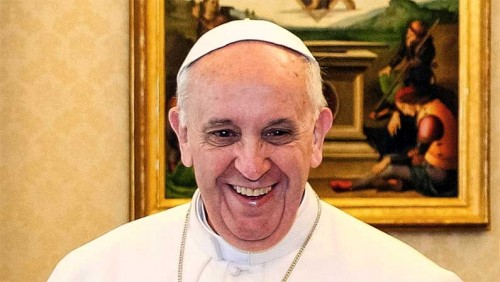 Austerity
There appears to be several reasons for the love affair between the pope and the media. First of all, after the dull Ratzinger era the world longed for a far-reaching change in the Vatican. It is not as if journalists are now forcing a new celebrity down the throats of a reluctant audience. On the contrary. In a short time, Francis has built a very strong and active image. A selfless benefactor named Francis (after Francis of Assisi) lives up to our wildest expectations.

Can this all be real, or are these hyped stories? It seems that the Argentine Cardinal Jorge Mario Bergoglio led a Spartan life long before he became pope. He was poor with the poor, and his present lifestyle seems to continue along the same path. Those who visited his home in Buenos Aires, called his living quarters there ‘austere.’ It would seem the man is for real, hardly any doubt about that.

Scandals
Now that the concerns of the greatest of all scandals the Catholic Church has ever faced are exposed; the sexual abuse; The Vatican could definitely use a pope like Francis.

He recently pronounced that one in every fifty clerics is a pedophile. As hard as it is to predict the outcome, Francis certainly takes a stand, but it remains to be seen if we will see heads rolling within the Catholic Church anytime soon.

He does have a precedent in other areas, such as with the ‘bling Bishop’ in German Limburg, who had to resign because of corruption. That shows a willingness to take disciplinary action when a bishop betrays his office. And those whom he has appointed in the new committee to protect children from abuse within the Catholic Church, are all strongly in favor of this new approach.

Of course, scandals are an inevitable part in an institution with such a large footprint. Nothing corrupts more than money and power. An abuse scandal, a bank scandal; are there more skeletons in the closet? Francis is now about to carry out financial reforms to reduce the likelihood of new fiascos. But no one seriously assumes that the scandals are over.

There’s a certain irony in his approach to fixing the Vatican’s financial mess: This is the Pope who rampages against capitalist predators and neoliberal economic thinking, but who did he ask to investigate? Ernst & Young and McKinsey, the high priests of the same neoliberal thinking!

Spokesman
Federico Lombardi, the pope’s personal spokesman and head of communication for the Vatican City, and director of Vatican Radio and Vatican TV, can breathe easy now that the new pope has reached an unexpected height in popularity. Under his former boss Benedict, he had to go to extremes to explain the latter’s rather clumsy, and not always understood pronouncements to the world. Where his spokesman had no immediate access to his predecessor, and rarely got to talk to him, this pope proved to be much more accessible.

However, Francis makes Federico’s life difficult in other ways. Because of his spontaneity, this pope is prone to do unexpected things, to the despair of his spokesman and his bodyguards.

Tower of Babel
Thanks to short-wave radio, the long arm of the Vatican still reaches deep into the darkest parts of Africa. The enormous editorial of Vatican City, a Tower of Babel where broadcasts are made in forty languages, from Ukrainian to Swahili, has an uncertain future. Facebook and Twitter would seem a lot easier and cheaper. Four hundred people working at Vatican Radio represent a tremendous cost, and cuts in the labor force seem inevitable.

Maybe The Vatican should focus on the message, while others take care of the distribution.
And that message better be good…

Pat Gitt Jun 1, 2018 2
No surprise, I’m not perfect. Nor the most attractive or smartest person in the room. But when I sit down in a…
Writing