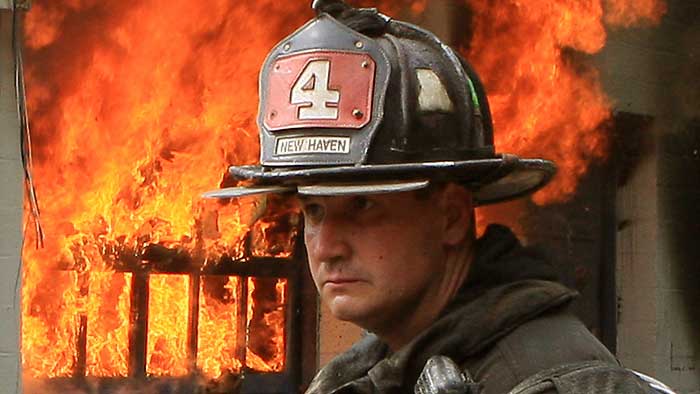 “You know why you’re here, right? This is National Firefighter’s Week and from what I understand, your daddy is a firefighter.”

The studio audience was immediately captivated by this adorable 4-year old on center stage.

“So, Charlie, tell me. What do you like best about your dad being a firefighter?”

Charlie squirmed in his child-sized chair, shaking his head while giggling … “I can’t tell you.”

Children like Charlie were why Bart’s House Party was the most popular weekly family show. Bart took Charlie’s response as a queue to ask another question.

“Well, if you can’t tell me that, let me ask you another question. What makes your dad’s job as a firefighter so funny?”

Although the studio filled with laughter, his parents were getting a bit nervous not knowing what was he might say.

Charlie had a keen eye for details, even at his young age. Pointing to Bart’s tie, it appeared he tried to change the subject.

“I like your tie. My dad has some stuff with fire on it, too!”

With a surprised look, Bart continued his interview. “Oh? Does your dad have something with fire on it?”

“Well, Charlie, can you tell me? What does your dad have with fire on it?”

Charlie’s dad was a local hero. This particular year had been an especially difficult one as he nearly lost his life more than once in daring rescues.

Charlie’s mom had always made it her goal to keep life at home light and fun, saving her prayers and tears for the midnight hour when all were asleep. She never wanted Charlie or husband to know of her ongoing battle to trust God for his safe return after every fire.

Charlie motioned for Bart to come closer to him. Bart leaned down as he began to whisper in his ear, careful to hold the microphone so he could be easily heard.

“My dad’s underwear has fire on it.”

Charlie leaned back in his seat with a newfound boldness. No longer intimidated, this little tale-bearer began to unveil his childlike insight.

“I saw mommy do it. She bought daddy new underwear and sewed fire on them. I know why, too! She always says that daddy is cool so I guess she thinks he needs the fire to keep warm … she’s so silly!”

“Why is your mommy silly?”

Charlie just looked at Bart for a moment with one of those looks. “She thinks putting fire on his underwear is going to keep him warm! See what I mean?”

“I do! Does your daddy wear the fire on his underwear in the summer, too?”

“Oh? And, what’s the difference between being cold and being COOL?”

As the camera zoomed in on Charlie, it was obvious he was now enjoying all the attention!

“You know! Being COOL is when you’re like my daddy who helps people and puts out fires and rides in a fire truck. Being cold is when you’re outside in the snow!”

The applause was nearly deafening as Bart walked toward the audience. “Ladies and Gentlemen, please meet Charlie’s dad, the ‘cool’ firefighter!”

With the spotlight on Charlie’s parents, Bart escorted his parents to take their place on stage by Charlie.

“Tell me, mom, what about it? Is Charlie right? Why do you put fire on your husband’s underwear?”

Obviously blushing, she carefully chose her words. “I’m so embarrassed! I never thought he would tell our secret. But the little flames I put on my husband’s underwear are a reminder to him that my love for him will never grow cold.”

The audience’s standing ovation made it clear that little Charlie was a star that day. Charlie’s mom was presented with a beautiful bouquet of roses as his dad was awarded the “Firefighter of the Year Award” by Bart’s House Party!

Not many years later Charlie followed in his dad’s footsteps as a firefighter. His wife continued the family tradition of sewing flames on the waistband of her husband’s underwear as a reminder that her love for him never grows cold.

Jan Ross and her husband Ron make their home in Willard, Ohio; they are the parents of six adult children who have blessed them with fourteen amazing grandchildren. Jan is an ordained minister, published author, and Bible teacher. With a heart relentlessly motivated by the Great Commission, Jan co-founded and serves as President of Heart of God International Ministries through which she has frequent opportunities to minister the message of salvation through Jesus Christ across the globe. She oversees ongoing and growing ministry activities in India, East Africa, Haiti, Soldiers Bible Ministry, JournEzine, Women of Passions, and various other local and international initiatives. Jan’s servant heart and deep passion for the Word of God continue to bear much fruit to the glory of God. www.heartofgodinternational.org