Because I have five nationalities in my genetic background, I’ve always considered myself American unless it was a holiday where I could embrace my ethnicity …like being Irish.

What can I blame my Irish background for? My milk white skin and rosy apple cheeks, my crystal blue eyes and my mahogany hair….scratch the mahogany; it’s now white with a touch of silver and gray. 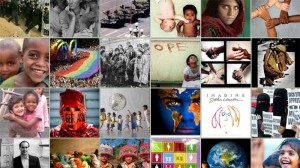 I truly deplored my skin tone when growing up ~ there were no sun blockers until my late teens and by then, it was too late, I had developed an allergy to the sun. Up until that time, I would burn, peel, burn, peel and freckle….I never found that lemon juice helped with lightening the freckles, it just made me smell like furniture polish.

In my late teens, because of other factors involved, I would get urticaria, better known as hives, if I spent over half an hour in the sun. Even today, I am still highly sensitive to the rays but now I think it’s because our sun is filtrating through less of a cover and the rays are stronger.

Whatever the cause, the sun and I have a love/hate relationship. My skin is smoother than it would be if I had indulged in sunbathing but I never knew the joy of a sun kissed glowing tan….I was the vampire walking among the stalks of golden wheat. Because of lack of natural sunshine, I need to take vitamin D3 and thankfully I still can remember to do that as it is a vitamin that helps with thinking.

As a young child, I enjoyed the wearing of the green which supposedly signifies the Catholic faith in Ireland, whereas the orange signifies Protestant. Same God, two views. I cannot find fact for this statement other than a fellow American Irish woman told me; but then a lot of the Irish tales are lore.

Quoted from the Irish Culture and Customs blog: There is no reliable account of St. Patrick’s work in Ireland. Legends include how he described the mystery of the Trinity to Laoghaire, high king of Ireland, by referring to the shamrock, and that he singlehandedly–an impossible task–converted Ireland. Nevertheless, Saint Patrick established the Church throughout Ireland on lasting foundations: he travelled throughout the country preaching, teaching, building churches, opening schools and monasteries, converting chiefs and bards, and everywhere supporting his preaching with miracles.

His writings show what solid doctrine he must have taught his listeners. His “Confessio” (his autobiography, perhaps written as an apology against his detractors), the “Lorica” (or “Breastplate”), and the “Letter to the Soldiers of Coroticus,” protesting British slave trading and the slaughter of a group of Irish Christians by Coroticus’s raiding Christian Welshmen, are the first surely identified literature of the British or Celtic Church.

What stands out in his writings is Patrick’s sense of being called by God to the work he had undertaken, and his determination and modesty in carrying it out: “I, Patrick, a sinner, am the most ignorant and of least account among the faithful, despised by many. . . . I owe it to God’s grace that so many people should through me be born again to him.”

St. Patrick actually had been captured by Irish Pirates, sold to a Druid, used as a slave for six years during which time he converted to his parent’s faith, Christianity. He escaped his captivity and as God is wont to do, resent to his captors to covert. Much knowledge of his ministry is woven fiction with fact ~ kissed by the Blarney Stone, if you will, but ‘his’ day stands as the beginning of Spring as he stands as the patron saint for fishermen on the Loire.

The one thing that stands out, for me, in the account of St. Patrick’s ministry is that he taught a Christianity of Joy and love, one that would easily and readily be accepted especially as Ireland already was considered inhabited by mystical folk.

For us to truly understand the love of God, we must accept the fact that God truly loves us. John tells us that in his gospel and the third chapter, sixteenth verse wraps it up into a neat package to nestle close to our heart.

I thank my Irish heritage for wanting to seek God and finding that even St. Patrick needed to be in physical bondage to seek, and find his deliverance for his spirit as well. He was not Irish in birth; needed Ireland to find what his spirit needed.

In my middle years I had a love of imbibing alcohol which could make me happy or pensive especially since it too would contribute to hives but the Irish are convivial drinkers and I counted myself in those ranks. Again circumstances dictated a change in my ways and I must now drink non alcohol or risk a migraine headache. I still do like the taste of beer and wine – fortunately both these brews come in their neutered state and I miss my Baileys straight up…but can settle for the creamer in my coffee.

Wishing my Life Away

One Woman, One Island, One Choice

Pat Bertram Mar 22, 2021 2
The Best Writing Advice Who gave you the best writing advice you ever received, and what was it? The best…
Book Review