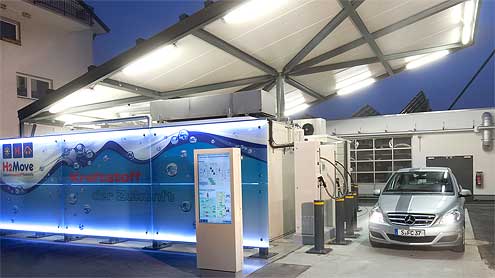 Hydrogen Fuel-cell Stations: An Update: I wrote this article a long time ago. I sent it to Prime Minister Harper’s email and I had four phone calls about it.  That is proof enough that they read their email and will respond to it.

All you have to do is ask, and they might make it happen too. Today I even got campaign literature from one political party. Who? The Conservatives

? Nope.  Building Hydrogen Fuel- cell Stations would require cooperation between governments and big business. In Ontario, it would cost Ten Billion Dollars, including an upgrade of the electrical grid system.

Imagine the United States cutting one trillion in military spending to make building Hydrogen Fuel Stations an infrastructure program? Sounds crazy. This sounds doable. I will give you the 30 second commercial on the article Canadian politicians are reading and thinking about too.

Here it goes. In 2012, word on the street a lot of young people in their teens and 20’s are buying electric bikes. Why? It requires no car license fiasco or insurance, all one has to do is walk into a store, buy it, and leave.

My proposal is very simple. Anyone who operates an electric bike in Canada has to buy a six month $500.00 dollar license. If they wish to drive all year round, they have to buy a renewal pass. All this would fund, not subways, but the construction of Hydrogen Fuel-cell Stations all over Toronto, but in every major city in Canada where there is a high density of population.

Yes, this is happening in California but it is in slow motion. But why would I choose to build fuel cell stations instead of subways? Let’s say the Canadian government passed this law tomorrow and it was retroactive. They would find out how much money they would collect in the next week and implement this plan into motion for the end of the year, or early next spring. If this initiative proves to be successful, every major city in Canada would have a supply of  Hydrogen Fuel-cell Stations.  But wait a minute… What about cars? Or Motorcycles? Those who live on a fixed income and retirees should be exempt.
By the way, anybody realizes that two million people in Ontario don’t have a driver’s license and cars are getting smarter than people? Get rid of the G1 and G2 Driver Registration. Why? generation y has all the money. If they see Hydrogen Fuel-cell Stations being built, they will go the dealership, see the new zero-emission cars on the lots, they will buy them with all their disposable cash, and that demand alone would power the automobile industry out of the great recession.
What would this do to the automotive industry in Canada? In 2008, the meltdown killed the automotive industry in Canada. Too many people lost their homes in Windsor and in Oshawa and these highly skilled workers went from a $ 35.00-hour job to a ten dollar job in retail. This plan would stimulate the automotive industry to build fuel cell vehicles, restoring growth and prosperity to a region of the province that was decimated in 2008. No country in the world has yet done this. We can be first.  Making this plan happen now, or in the future, may require a referendum but it would be worth it.  I firmly believe Global Warming is real period.  It is awfully fashionable for celebrities to protest the construction of the Keystone pipeline. Is there an alternative to the argument?  Can we allow the construction of the Keystone pipeline as long as money is set aside to build Hydrogen Fuel- cell Stations in high populated areas?
No media organization has touched on such an idea.
Continue Reading
CelebritiesClimate ChangeEnvironmentGlobal Warming
0
Share FacebookPinterestTwitterLinkedinReddItTumblrWhatsAppScoop ItMediumEmail

The Deadliest Flu in History 1