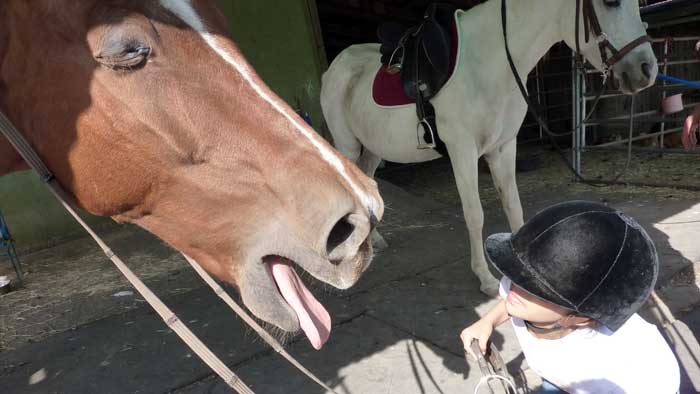 I have been spending time with our little readers and future writers lately. One of those talented little people reminded me of why I wrote a particular manuscript in the first place. It’s over 30,000 words, finished, a chapter book for young readers and yet it sits in a drawer, in my desk.

Several students stood out during my visits, the ones that love to write, be it screenplays, research papers, or novels, but one young girl stood out for those reasons and another, she loved to ride. She enjoyed writing but she loved to ride horses.

Being a competitive rider, she had an event the very same weekend as my visit, and her little eyes sparkled as she described it to me. As a child, well I was always in the barn, being from England that would be the stables.

I started riding very young; I took my first lesson when I was four. By the time I was nine, I  was competing. If I wasn’t at the stables, my bike became my horse; anything I could bounce over became a jump. While at home, the back of the couch or an arm of a chair, anything I could pretend to ride until I could get back on my horse, I did.

One day, my instructor asked if I would exercise her daughter’s new horse, I was honored. It was a day I will never forget, but more importantly, the days that followed will always be with me because I learned something about my dad that I didn’t know.

It had been snowing and the horses were fresh, to say they were excited, well that would be an understatement. To make a long story short, several horses bolted that morning, mine included. He ran through a brook, stumbled, and fell head over heels, over and over. I don’t remember waking up, but when I did everyone was around me.

I was taken to the hospital; I couldn’t move or feel my legs. I had no idea how scared everyone was, but it became evident very quickly due to the looks and fear in their eyes.  Luckily the temporary loss of feeling was just that, temporary. I was muscle and bone bruised, and couldn’t walk for weeks.

This went on for a few more weeks, until one morning he was in the kitchen, dressed and ready to go. There were my jodhpurs, boots, and hat. He never looked up, he simply said, “You never have to ride again, but today Amanda, you ride!”

Well, needless to say I rode that day, and that man never left my side. He led me around a round pen until unknowingly he’d unclipped the rope. He stepped 3 strides towards the center, and when I asked what he was doing, he assured me he was still there and I was going to be ok. After a while I was cantering by myself, leaving the round pen and riding as normal.

Once again never leaving the stables unless I was forced, which was usually by the time it was dark. I spent many years training and riding show horses, it’s a fantastic world; I would have missed it for not the love of my dad, and I will never forget his words or the lesson he taught me that day.

Talking with that beautiful little girl, I was reminded of why I wrote that particular manuscript, it is after all my father’s favorite! She reminded me, that I wrote it because young girls love horses, friends, sleepovers and crushes on boys. My next release is Fairy Kick a Berry, Game On, the second installment of Mischief in the Mushroom Patch, but if I decide to send that manuscript into my publisher and they do decide to pick it up, it’s because I was reminded of why I wrote it in the first place.  By the way, it has a great title too!

That said, to the little girl who sent me the lovely email, “Thank you for reminding me of why I spent so much time writing that piece in the first place and no worries, that horse I was riding, he’s what we refer to as VERY GREEN… likely the reason the daughter didn’t ride him that day, and I know that now!

And We Call It Love

Light On The Water

Gerry Huntman Apr 22, 2013 0
Book Markets and Author Respect Over recent weeks I have noticed some discourse on the topic of For The Love…
Publishing