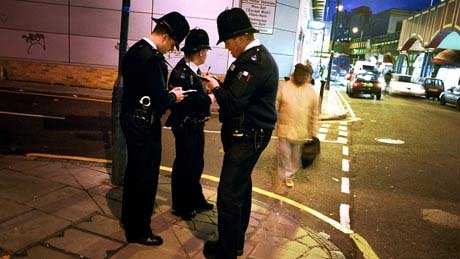 He could hear the cry ringing out. He looked at his watch. Two minutes to clock off. No point in getting involved. The next watch could take it when they came on, in about half an hour.

The cry was getting nearer.  It had been this way since the cuts 28,000 had lost their jobs, overtime cut, and no extra pay for riot duty.

It made him and the others feel like hell but what could they do? orders were orders.  Now with so few on the ground and fewer car patrols, the gangs were running riot and the terrorists were having a field day.

A man suddenly careered round the corner.

‘I need your help, a woman is being attacked!’

He looked at his watch again, he was off duty, shift had finished. He had to get back to clock off or he’d be in trouble.

‘What do you mean? that woman, she needs help.’

‘Really would like to help you Sir, but you see my shift just finished.’

‘I have to get back to the station and clock off.’

‘What do you mean? a woman is being attacked and you are talking as if you worked in a factory.’

‘Sorry about that Sir, it’s just the rules have all been changed, government spending cuts.’

‘I don’t believe you. What is going on, are you a lunatic?’

‘Harry! Going back to the station?’

‘What’s the matter with him?’

‘Say’s a woman is being attacked.’

‘Well, we would like to Sir, but can’t do it anymore. Have to finish at the end of our shift, we are in trouble already, we should have clocked off three minutes ago.’

‘Look Sir you just go and phone control, they have a car driving around in London somewhere, it will be with you in an hour or two.’

‘But that woman will be dead!’

‘Yes, that is a shame, but that’s the way it goes. Goodnight Sir. Have a nice evening.’

‘Evening; sorry I’m late got held up, a man said a woman was being attacked right on the shift end, can you tell the next shift sarge.’

‘You wanted me sarge?’

‘Yes, Fred. Sit down, I have some bad news, it concerns your wife’……