Growing up in a small Texas community that is not even located on the map, Kay Goodwyn never dreamed that in 2011 she would be the owner of a multi-million dollar business that provides rescue and safety tools and training to first-responders, EMTS and other workers around the world.

Located in Baton Rouge, LA with offices in New Mexico, Vancouver and New York, Roco Rescue has trained workers from Kuwait to Ecuador and offers a training center in Baton Rouge for confined space and high angle rescue, structural collapse, trench rescue, tower work and rescue, fall protection and firefighter personal escape.  Goodwyn’s company trained rescuers at the Statue of liberty and the World Trade Center before 9/11, and in 2008 they were awarded their first Department of Defense contract to provide training to the U.S. Air Force’s “Guardian Angel” program. 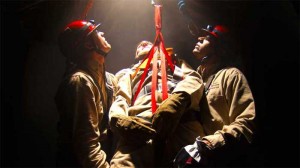 “In 2008, we were awarded our first Department of Defense contract, which has been a great opportunity and honor for us. As part of the U.S. Air Force’s “Guardian Angel” program, we currently provide Tactical Rope Rescue and Structural Collapse Rescue to a very specialized group referred to as “Pararescue.” These highly trained special operation forces are responsible for rescuing downed American pilots and other specialized missions from behind enemy lines. They also respond to many humanitarian missions in the U.S. and around the world,” Goodwyn explains.

In addition, Roco Rescue received another Department of Defense contract in 2011 to provide specialized rescue/extrication equipment kits and training for all military branches of special operations.

Sounds like she has been busy since she left her home in the tiny community of Patroon, TX.

Her first stop was the Beaumont Fire Department where she served as the fire chief’s secretary. Goodwyn never dreamed of becoming a firefighter, but  but curiosity and her desire to do more, landed her in training with several other “guys” in 1979; she became Beaumont’s first female firefighter.

“Fire academy was extremely demanding, but lots of fun too,” she says.  However, she felt a lot of “pressure to perform no doubt from myself mainly.”

“I remember being at an auto wreck scene on I-10 and the news crew was more interested in filming me and what I was doing than the story about the accident,” she explains.

After a year fighting fires and attending wrecks, Goodwyn continued her studies of fire and rescue, eventually learning to write specifications for fire trucks. She says her career in Beaumont was rewarding, but difficult at times.

In 1982 she and her fellow fire fighters  received training in high-rise rope rescue from several Louisiana State Troopers in Baton Rouge.  About a year later, Goodwyn joined the troopers in Roco Rescue in Baton Rouge and now the company is hers.

Goodwyn says her idea of work ethic comes from her parents. Her dad, a World War II veteran, never let her nor her younger brother forget what freedom meant by living in the USA.

“From my dad, I got a real sense of how fortunate we were to live in the U.S. and enjoy the freedoms we had,” she says. “I knew that my dad had been deeply affected by his experience in WWII, and how it changed his life forever.”

“It also fostered a deep respect for our military. Never did I dream that my company today would be providing training for these very special individuals in the U.S. military,” she says.

But when asked if her mother ever mentioned being worried about her decisions, Goodwyn replied “I guess Mother was just used to me being quite ‘independent’ and thinking I could do anything.”

Today, with her parents gone and she being the eldest child, Goodwyn is the matriarch of her family as well as her company. With young family members, Goodwyn hopes her hard work ethic that she got from her folks is passed on to the younger Goodwyn generation that look up to her.

“I have such a wonderful family, and I’m so thankful for them. I pray these young ones will grow up with a strong faith and security in God – knowing that He can give them the ability to achieve their goals, even when they don’t think it’s possible,” she says.

As Roco Rescue enters its 30th year in business, Goodwyn’s goal for the company is quite simple.

“To me, it’s all about doing the right thing, helping other people, striving to be the best, working with people you care about, and enjoying what you do. “

“You also have to be open to new ideas and maintain an attitude of ‘constant learning.’ Impressions do count, even with the small stuff. And most importantly, you’ve got to be trustworthy – with your customers and your employees.”

Good advice from someone who came from a small community and went to the big city.