So what was it?   Was it a love match?  Or was it merely a partnership of mutual convenience?   Two hundred and fifty years, and a wide swing of historical opinion.

The Widow Custis
Martha Dandridge had married an old man.  She was seventeen and Daniel Parke Custis was already around thirty-five.  But it had been a marriage of inclination – they knew and liked each other and it turned out to be happy and fruitful.  She had four children; two dying as infants.  Then, after eight years, Custis died.

He had been an extremely wealthy Virginia planter, and he died intestate.   By Colonial Virginia law, Martha and her children, Jackie and Patsy, four and two respectively, were his only heirs, so the estate was split equally three ways.

This estate included nearly 20,000 acres of rich farmland, more than 200 slaves, household goods of great value, and that rarest of all commodities in colonial America, a good supply of hard cash.

Now at loose ends, she had to chart a new life.  Life was hard.  Spouses needed spouses.  If one was widowed, male or female, one was expected to remarry fairly promptly, especially if there were young children involved.

Martha’s needs and priorities were not limited to the 18th-century living.  They were needs and priorities for all times, including our own.  First, she needed a wise and honest manager for her inheritance and that of her children.  She was no fool.  She was understandably wary of fortune hunters.  Secondly, at twenty-six or –seven, with four children already born to her, she had every expectation of having more children – perhaps several more children.  She needed a kind step-father to her children.

Militia Colonel Washington
At age twenty-six, George Washington had spent eight years in the Virginia Militia, rising to the rank of Colonel, the highest the state had to offer.  For years, he had applied and lobbied to become a British officer, a situation continually thwarted.

Having come to the conclusion that he was getting nowhere, he made a conscious decision to change his career path.  He had inherited Mount Vernon, a substantial and very promising estate along the Potomac River.  He also had acquired considerable acreage in what is now the western part of Virginia, in payment for his military services.  He would become a planter.  But in order to take what he wanted to be his rightful place in a plantation society, he needed a suitable consort.  Someone who could help him turn his vision of  Mount Vernon into a showplace as well as a profitable entity. 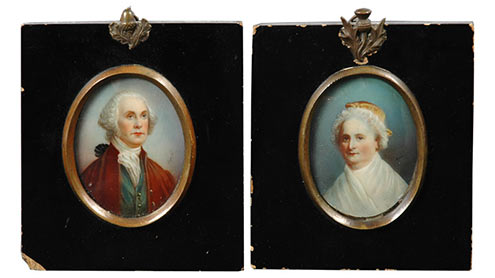 The Traditional Courtship
George Washington and Martha Custis were introduced by mutual acquaintances.  Both were unquestionably in the market, so to speak, for marriage, and their courtship was brief.  They would spend less than 24 waking hours in each other’s company, during which time they were engrossed in deep conversation, sharing their needs, philosophies, and dreams for the future.  Then they were affianced.  For the next several months, Colonel Washington would leave to clear up the loose ends of his military responsibilities; the Widow Custis would make preparations to move to Mount Vernon.  Letters no doubt were exchanged, but none exist.  (Martha Washington destroyed a great deal of Washington’s correspondence when he died.)  The one widely quoted comment on their newly married state is a statement by Washington in a letter to an acquaintance where he states that he has found “an agreeable Consort for Life.”

It was hardly a wild passionate romance, but it is fairly certain that by the time their engagement was determined, George and Martha liked each other a great deal, and found much compatibility.  In the eighteenth century, marriages were primarily made for ease of living, each partner contributing their share of the man’s workwoman’s work dynamic.

Suffice it to say that in the forty years the Washingtons were married, they had grown to love each other with true devotion.  They had chosen wisely, perhaps more wisely than they could have realized at the time.  Washington was indeed a wise and honest manager of the Custis fortune.  He would add to that fortune by his own astute business sense, and by the time of his death, would be one of the wealthiest men in Virginia.  He was also a caring and fond step-parent to Martha’s children, both of whom died young.  He would also be a caring and fond step-grandparent to Martha’s grandchildren.

– and the executive mansion when George Washington became the first president of the United States.  She would bring a distinctly new and democratic flavor to her hosting duties: all the dignity, warmth, style, manners and sincerity that is associated with American hospitality.

MiriamSPia May 21, 2021 0
Powerful Women Fiction Characters Like most fiction novelists and story writers, I write both male and female…
Publishing