Memory is a funny beast. How often have you heard someone recalling something from their past, not sure whether or not to believe what you are hearing? How many times have you recalled something yourself years after it happened? What triggered that recollection? Was it the truth of what happened to you or merely an embellished conglomeration?

When the particular event in your life occurred, it happened so fast in comparison to what your memory conjures up in later years. At the time you concentrated on what was happening immediately to you, not the minute details. In a life or death situation you have no time to analyze the situation, self preservation takes over.

Over the years I have listened to various interviews with people involved in a particular moment, historical or personal, intrigued not so much by the event being recalled as by the unconscious embellishments they use.

This morning I was listening to several interviews with survivors of the famous World War II 617 Squadron – The Dam Busters, recorded sometime in the late nineteen seventies. One spoke about the many colours he saw as the Germans thousands of feet below the Lancaster he flew in, fired a barrage of flack at his aircraft and those around him. 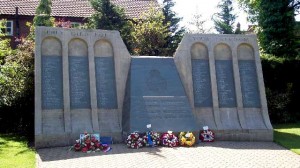 At the time, for a fleeting moment, his brain took note of the terrible flack, filing it away at the back of his mind. It wasn’t till years later when the interview occurred that he had time to think about that minor detail of the colours.

Another spoke about the hectic adrenalin filled raid, the conditions in which the seven crew members went about their various tasks, not only to ensure the raid’s success, but also to return home safely to the squadron’s base in Lincolnshire in England.

The one thing that really stood out for me about the interviews was how each and every one of them saw the same moment totally different from that of their crew mates.

Each one spoke of the same moment in time, agreeing in principle on what actually happened. But the interesting thing was that each of them had put their own personal interpretation on it, colouring it with their impressions based on that fleeting moment thirty years before.

Memories fade over time. While the event remains at the forefront of your mind, details once vivid, take on a whole different meaning years later.

As I said at the beginning – memory is a funny beast.

Pat Bertram Nov 8, 2012 2
Did Writing Your Book Change Your Life? I wish I could say writing my latest novel Light Bringer changed my…
Science