In the bye-gone era, when footballers were local players and the £1 million tag was never heard of. Yes, you read that right. Here is a short story to demonstrate how pampered today’s players are in comparison.

Back in those days, players travelled in the team coach, a few lucky ones had private cars. There were few motorways and most were around London. There were no private jets or helicopters.

On the Good Friday, Bristol Rovers played host to Stockport County. Stockport is just outside Manchester.

The following day, Rovers had to make the 3 1/2 hour journey down to the south coast to play at Torquay United 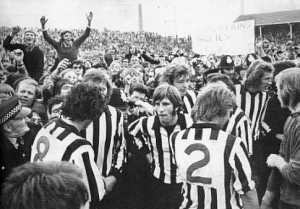 After the game, the team had to return to Bristol. To prepare for the 4 hour journey on Easter Monday to Stockport. These times do not allow for major traffic jams, they are based on a vehicle travelling at 50 miles per hour.

So next time the Russian, Czech, Pole or whatever nationality fills your team complains he is not getting paid enough. Or he cannot play for some reason, remember that within a lifetime, foreigners were once considered as the Welsh, Scottish and Irish members of the teams.
A time when £100,000 for a player was a huge fee and players played football for their local teams.

A Dress To Die For

Perhaps it is that Time