The first act is what he said in the interview. A 25% tax on all Chinese goods coming here. We are defaulting on the loans. “China, you’re fired!”

The Chinese invite The Donald for a state visit. “Oh no,” The Donald says, “you come here.” The Chinese President arrives, no pomp and circumstance, no state dinner. Just a summons to the Oval Office and TV cameras are present. The meal is Mickey D’s. (McDonald’s). 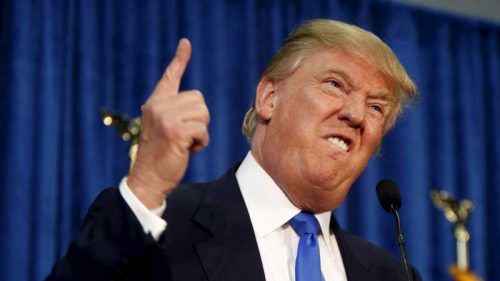 The Donald lays down the law. The Chinese President Mei You Mianzi (Mandarin for not having face or honor). He leaves silently. He will not show his humiliation. Especially when President Trump finishes with, “China; You’re Fired!!!”

For those of you, who are as old as I am and remember the cartoons, The Flintstones, and The Jetsons

, the men of the house were fired almost weekly.

It is hard to fire a country though. Are you just firing the government or the entire country? McDonald’s has billions of hamburgers served China and India have billions fired. Trump said he would go after Pakistan and Saudi Arabia as well.

After all The Apprentice episodes (both to work for him and Celebrity Apprentice), who will work in his administration? Piers Morgan can be Secretary of State. (The foreign-born angle has been done before if you remember Henry Kissinger).

The man who just lost to Piers Morgan, Country singer Trace Adkins will get some sort of job.

In the 19th Century, supplicants came to the White House for employment. In the 21st Century, will they line up to be fired? It will be like Monty Python’s Life of Brian when they are waiting to be crucified. ”First door on the left, one cross each.” They will be lining up to be told those two words. You’re fried! I mean fired!

The Mechanics of Writing…