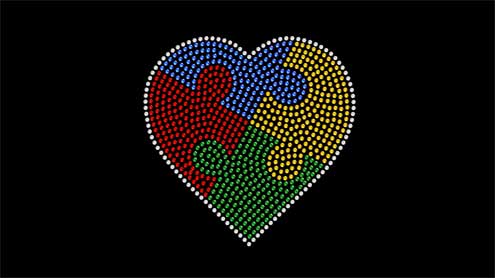 Those who know me quite well know that I have a young daughter (aged 7, going on 8 soon) who has high functioning autism.

The term ‘high functioning’ doesn’t mean she is ‘nearly normal’ or has ‘special talents’, it mainly means that she can talk and to some extent interact with other people.

There are some children on the autistic spectrum who can’t talk and relate, and they represent the most affected by the condition. Of those people who are at the high end of the spectrum, those who truly are closer to ‘neurotypical’ (as many of us affected by autism in our lives, call it), are those who have Asperger’s Syndrome.

All of these conditions exist, and the autistic spectrum definitely exists. For very many parents with children on the spectrum, our lives are profoundly affected by it, but not anywhere as much as the autistic kids themselves.

I read an article in the Sydney Morning Herald today, and I was dismayed. Not surprised, but dismayed.

Thanks to movies like Rain Man, and nerd-culture, being ‘aspie’ is sort of funny, cool, even (in a nerdy way), sexy. There are even ‘aspie’ pride groups. This is terrible for parents like me, for all sorts of reasons.

I don’t fundamentally disagree with the article – I think the premises and assertions are basically correct. The problem is that the writer focused on the way the terms ‘Asperger’s’ and ‘autism’ has infiltrated cultural perceptions, and touched on the dynamics of how it also influenced psychologists making diagnoses, but it spent next to no word count on how it affects people like my daughter.

This is journalism of the worst kind, because the opinions, while strongly researched, are geared to the way the terms have had a negative effect on psychological diagnosis, not on how it has helped, nor what is being done to help those with true, honest-to-goodness, challenges for life. For example, people will use spurious logic to ask, “why is it that 1 child in 10,000 was on the spectrum in the 1970s, when they are 1 in 100 now?”

Some will answer with crazy stuff like computer games, global warming, or poisons in food are the reason, while others will say that it is because the syndromes themselves are non-existent, they are a fad and therefore the numbers of people found on the spectrum are simply fabricated by ‘discovery’.

These are extremes, but I should make the point that the official US list of psychological conditions has removed the diagnosis of ‘Asperger’s’ from the register, and instead, have ‘autism spectrum disorder’ placed in its stead with degrees of severity, to try to control and tighten the language about the condition. A cynical person will say that this is being done to try to control the numbers, but as a basic principle, I agree with the effort.

As the writer of the SMH article stated, it is, nevertheless, too late. In everyday language, ‘Asperger’s’, ‘autism’ and ‘spectrum’ are now part of society’s language, and it has little to do with those who are really affected, like my daughter, and those indirectly affected, like me and my wife.

There is even a belief among ‘lay’ people that Asperger’s people, and even Autistic people, have Rain Man-like special abilities, like photographic memories, or mathematical skills at an Einsteinian level. Balderdash.

This isn’t genius, this is life-long devotion to a particular activity. Temple Grandin is an excellent example of this, and while she is a wonderful example of how someone with autism can make it in life, she is a rare breed indeed. As a parent of a child with autism, I am in awe of Temple, but all I dare wish for my daughter is a happy, fulfilled, and long life.

I have to believe that the more factual information I present to the community, the better the community will understand that there really are a lot of kids out there who are severely affected by a ubiquitous neurological disorder and need everyone’s support. A real disorder.

The low functioning kids can’t even speak, in many cases can’t express love – they are in a very sad state and need all the love and support for the REST OF THEIR LIVES that people can give.

My daughter has many obstacles and there is every possibility that she will need assistance for the rest of her life. Only time will tell, but at least she is given a lot of love and support, and thank goodness for decent early intervention by way of government assistance, and no small cost by myself and my wife.

She is lucky to go to a school whose express purpose is to assist children with autism (and yes, lucky, by geographical proximity and the right timing of submission), and I wonder what would have happened to her if those services weren’t there.

I genuinely believe that the rates of autism have roughly been the same for centuries, perhaps since the beginning of human existence. It’s just that in the past the people with the condition were diagnosed with different conditions, or were simply the ‘village idiots’ that every community had the stupid, crazy kids that other children could flush their heads in toilets for pranks, and other bullying techniques.

So, while the diagnosis of autism and Asperger’s Syndrome might not have been very accurate over the recent decades, it has done one wonderful thing – it has allowed my daughter a chance to develop skills and techniques to allow her to live in our far from perfect world.

A fighting chance. The problem is, because of mass media, poor journalism, and the nerd culture, among other group dynamics, the ‘Aspie’ bandwagon is now starting to erode, possibly killing all the great advances in health care that have developed over the last thirty years or so. This is not good, and this is why I despair.

This is why I continue to support Autism Awareness.