December 21, 2009
I met Sam today, the son of the woman who told me Nicholas had Autism and who held me that first day when I cried.

It wasn’t intentional this time, bumping into her son.  I’d deliberately put myself in front of her with Nicholas that first day. I’d had a sudden wavering and flicker when I knew my heart had to hear it. And having given up on Nicholas’s doctor ever admitting to me that I’d been right way back at 5 and a half months I’d set us up to be in her presence that day so I could hear the things I knew. I wanted to hear from a mother, whose word I’d trust above a dismissive doctor if she saw Autism in my son. That day had been a monumental test of my strength. 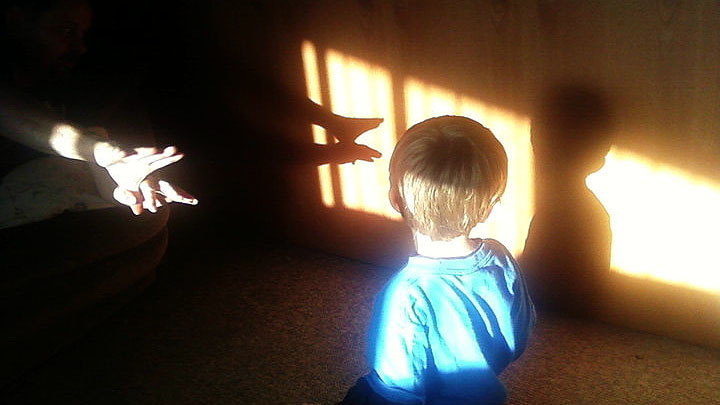 But, on this day it was accidental when I ran into her son a nearly 17-year-old boy who’d been diagnosed with Autism 13 years ago. I’d not met him before. I was driving to my friend’s house to meet up for our usual evening jog when I turned the corner into her drive and there they were. Sam dated my friend’s daughter.  Both kids have certain higher functioning developmental issues.  Sam’s being, of course, one of Autism and Leanne’s being nonspecific but rather severe cognitive issues and learning disability.  They had been caught mid-embrace. Sam’s hand had clearly been perched on Leann’s breast.  They sprang apart as I slowed and rolled my window down.

I sucked in a breath at once eager and afraid to make Sam’s acquaintance.  “Hi, I said, you must be Sam” My eyes searched his face looking for it.  The dreaded “it” that would show his difference.  I was excited, tense, afraid, and yet determined all at once. What I saw was a pleasant-looking young man with soft friendly features and like Nicholas he had the most beautiful eyes.  Nicholas’s are a kaleidoscope of the loveliest starbursts of hazel rimmed in sapphire blue.  Yet, it’s not the color but the light behind them that always catches my breath. Sam sported this same phenomenon though his were swirled combinations of golds and browns.  The light in them shined low and soft and turned them into a beautiful smoky and amber whiskey shade.  His eyes flew wide ready to give me a grin though he looked frightened that I might just mention the fistful of breast that he’d just moments ago released.

Friendliness seemed to win out for him.  “Yes.  I am Sam he said”.  I could see that he had worked on learning the things of eye contact. It took a moment for his eyes to truly land and then stay with me. His cadence was a little off.  Perhaps a little fast, as if he might stumble into a stutter at any moment, though, he did not. But, as he spoke further it settled into a calmer rhythm.  His hands also flew wide in broad expansive gestures that didn’t exactly sync up with the words he said.  But, those too seemed to settle a bit as he spoke. He remembered to take the hand that I offered to shake and I introduced myself.

He seemed awfully darn happy to meet me.  I felt warmth in his pleased gaze that he maintained.  I said “I am here to pick up Leanne’s mother”.  That is when Leanne handed me the phone.  Her mom was on the other end canceling our exercise date.  I watched Sam the whole time.  He looked in every way normal to me.  He behaved like any guy who had his favorite girl in sight and who had met up with that age old dread catastrophe of a nosy annoying mom making an untimely cookie and milk drop. He leaned up against Leanne and told her something in her ear.

As a joke I said “okay y’all behave don’t forget that even if your mom forgets to– God is always watching you”.  Inside I immediately cringed and railed at myself . Oh my God! I realized at that moment that I am the annoying cookie mom and the seriously lame joking dad all rolled into one! I used to be WAY cooler than this!  I wore miniskirts and saw Ozzy live in concert! For God’s sakes! Outside I remained smooth like glass. At least I certainly hope I did. Maybe? Probably not, I’m not particularly good at smooth. My words had an immediate effect on Sam and halted instantly my internal self directed harangue.

What I said was probably a mistake.  I’d forgotten about one of the hallmark signs of Autism.  A person who has it may have difficulty understanding a tease or a joke, particularly a very lame badly lobbed one like mine. A person with Autism may be very literal and poor Sam clearly was one of these people. Sam’s eyes grew huge and he did begin to stutter and my heart paused as my breath caught in my throat when his hands came up in those beautiful downy soft butterfly motions near his lips that I’ve seen all too much of lately.  I nearly came undone right there in front of them both. Oh, the beauty of an Autists hands it’s indescribable. In watching my son these hand motions have had the singular power of both breaking my heart and mesmerizing me.

Gently I reached my hand out and touched his arm I looked deeply into his lovely eyes the same way I do with Nicholas when I really want to connect “It’s okay Sam, I was only joking.  I know you are a good guy”. He visibly relaxed and then like a serious man of some long gone era who was simply meaning to go courting and has been terribly misunderstood he said “I am a Christian man. I read my Bible every night.  And Leanne and I know no hanky panky before we are married. If we wait God will bless us.  Isn’t that right sweetie?” he said as he leaned in and nuzzled up to Leanne’s ear.  Somehow, the forthright proclamation sounded utterly sincere even around the mouthful of Leanne’s ear.

Feeling like an utter asshole, my mother, and every clueless intrusive adult I’d ever met combined I sucked back my grin and tried to look stern though this isn’t natural for me.  I said “Okay Sam and Leanne I believe that too.  If you do too you’ll want to stick to it so that you don’t have regrets”. I was really proud of the gravity I held in my straight face and was all twisted up patting myself on the back when Sam burst out in carnival barkers rhythm and shout “Oh, no regrets! Regrets are bad. It’s better to wait.  NO HANKY PANKY!” he said again.  Lips, hands, ears and breasts aside somehow I believed him.

I filled my eyes with him. I caressed his face with my gaze.  It was all so normal and such a beautiful thing.  A boy and a girl caught in the act of groping in the hidden shadows under a shade tree.  “Okay I said Leanne tell your mom I said hey. Goodbye Sam it was so wonderful to meet you”.  “And you too Mrs…..somebody’s mom” he said drifting off looking a little crestfallen in his sudden confusion.  I waved my hand and laughed low in my throat and said goodbye.

Laughter! Laughter snagged in my throat and though garbled and unfamiliar feeling I allowed it to roll for a little bit. Oh, it felt so good to laugh even at my own expense or at the things Autism had thought to steal from me.  From Sam’s mom I’d learned that predictions for Sam’s future had been bleak. She’d been told, like me, that he might never speak and probably would never have any independence to speak of.  She’d even said that at an early age Sam had seemed a little less social than Nicholas. But, they’d just plugged on and pushed for function and somehow somewhere in those 16 magical years Sam began to emerge and form a life for himself. In Sam’s beautiful eyes I found the tiny seeds and the beginnings of real and true solid and lovely things of hope.

I backed the car away. They were supervised never really alone.  Overlooking them was the big bay window to the house. There was the shadow of someone just behind the blinds. They couldn’t get up to much.  As I drove away I saw them reconnect.  Their bodies closed the gap as if magnetized.  I want THAT I thought for my son.  I want him to find a pretty girl and a willing breast.  And I want for him a life outside of me.  Please God let him have that.

Sam was like any boy anywhere, really, in the end.  He definitely had a few differences but from where I sat he had all the promise of a future and a life that involved happiness, independence, and maybe even love.  Love. The biggest fear and heartache of mine the idea that my son might never have or be capable of that. And here Sam had found some for himself.  Of course he clearly had Autism and that is no small thing. There was a lack of sync between his body and his mind.  His body movements were wide and broad.  His eyes didn’t want to stay on one object but he obviously worked hard at control of this. His speech pattern was a little odd a little too loud, sometimes too fast. His intellect may have taken some hits with his Autism but not so majorly that anybody who wasn’t looking carefully would really think to remark on it.  The most striking thing about him was his innocence which even I had to admit was quite a trick to maintain with his hand on Leanne’s chest, but somehow he did.  And notable too was his outright eagerness to please.

In all of those things Sam had risen above the predictions tossed so casually out by the experts in charge of his care fifteen years ago when Autism was looked upon even more bleakly than it is today. He’d exceeded every one of the milestones they said he might never reach.  As I drove away I released my pent up breath and relaxed my fingertips and before I knew it I smiled.  I really smiled for the first time in days.  If Sam could fly above the swishy swirly watercolor rainbow then it’s entirely possible that my beautiful Nicholas can too. And I thanked God out loud for the “chance” encounter as the dust from the dirt road I slowly drove down rolled up to cover Leanne and Sam from my vision.